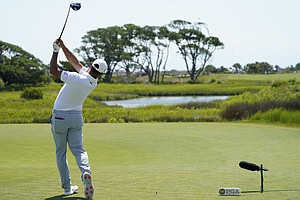 Gary Woodland tees off on the third hole during the second round of the PGA Championship golf tournament on the Ocean Course Friday, May 21, 2021, in Kiawah Island, S.C. by AP Photo/Matt York

Woodland’s second-round 72 at the Ocean Course in Kiawah Island, S.C., left him at 2-under par for the tournament, just three strokes behind co-leaders Phil Mickelson and Louis Oosthuizen.

How he got there was a different story.

Woodland opened Round 2 with a bogey on the 10th hole, parred everything from 11-17 after that and then carded a double bogey 6 on No. 18.

On the troublesome hole, Woodland’s second shot got away from him and landed in a native area just beyond the rough. From there, he hit his third shot to 80 feet and 3-putted from there.

Despite the disappointment of finishing his front nine with a big number, Woodland quickly dialed back in and birdied four of the next seven holes he played. That included a stretch of three consecutive birdies at holes 3, 4 and 5 and another at No. 7 that took him to 1-under for the day and 3-under for the tournament.

His back nine ended the same way his front nine did, this time with a 3-putt from 40 feet to put him at 72 for the day.

On a windy day that saw just as many scores over par as under, Woodland’s even-par round was good enough to keep him in the hunt heading into the weekend, where he will look to contend for the second major championship of his career.

Mickelson is the oldest player to have a share of the 36-hole lead in a major since Fred Couples (52) at the 2012 Masters.

Brooks Koepka had a pair of eagles offset by four bogeys and scrambled for par on the 18th hole for a 1-under 71 that left him one shot behind in conditions he loves.

“It’s a major, man. It’s going to be tough, especially with the wind blowing,” he said. “It doesn’t matter, just go out and go play.”

Masters champion Hideki Matsuyama dropped a shot on the 18th hole and still shot 68, leaving him in the group two shots behind.

The casualties included the top two players in the world — Dustin Johnson and Justin Thomas missed the cut — and a tee marker on the 17th that Erik van Rooyen smashed when his shot went into the water. The head also came off his club.

Only 18 players remained under par, which included U.S. Open champion Bryson DeChambeau, who looked exhausted walking off the course after a 71 that featured no birdies on the back nine.

Woodland is scheduled to tee off at 1:10 p.m. Saturday and is slated to play with Round 1 leader Corey Conners.

Three birdies in a row is a nice way to celebrate.pic.twitter.com/H4XZXQtfwl