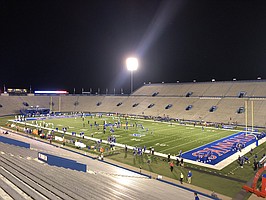 Kansas and Coastal Carolina warm up under the lights on Saturday, Sept. 12, 2020. The game was the season opener for both teams and, with fans not allowed to attend, it featured very few of the normal sights and sounds surrounding David Booth Kansas Memorial Stadium. by Matt Tait

The idea of the Kansas football program moving its first two games of the 2021 season — and of the Lance Leipold era — to Friday nights initially sounded a little sour to me.

Friday nights, after all, are for high school football. And I’m not sure that a program that’s in the position KU is in at its current state can just assume that fans will show up whenever they play their games.

They want them to. They need them to. But actually getting them there is far from a given at this point.

With that in mind, I decided to take a little deeper look at why KU’s Week 1 and Week 2 games against South Dakota, at home, and on the road against Coastal Carolina, were moved from Saturdays to Fridays.

There had to be a good reason, right?

TV was my first guess. It always is these days. And it turns out that was half correct.

According to a KU spokesperson, it was Coastal Carolina that asked Kansas if it could move the Week 2 game to a Friday night to allow for the game to be broadcast by ESPN.

Naturally, both sides were interested in the national audience, and that game, which is set to kickoff at a time to be announced later on Sept. 10, will be shown on ESPN+.

This request, I was told, was made weeks ago, long before Leipold was hired.

After agreeing to the change, administrators at Kansas then had a decision to make — leave the Sept. 4 season opener on Saturday, therein creating a short week for the Jayhawks in their first road game of the season the following week, or look into moving that game up a day, as well.

Given the fact that the Jayhawks lost to Coastal Carolina in each of the past two seasons, and the fact that this year’s game is on the road and will require Kansas to travel to the Eastern time zone, the decision was made to move up the opener to preserve a full week of preparation between Week 1 and Week 2.

Hard to argue with that move, especially when you consider that Kansas and Leipold would get a major lift from a fast start this fall.

So why not take advantage of every possible opportunity to allow Leipold and his team to be as prepared as they possibly can be for what we already know will be a tough game, regular week or otherwise?

It stinks that it comes at the expense of high school football, but it doesn’t sound like that was anything intentional.

The good news here is it’s not like KU’s games will automatically take away from the high school scene on those two Friday nights in September.

Fans, parents and supporters of the local prep teams are likely will still focus all of their attention on those games and hope to catch the end of the KU games or keep track of them on their phones.

If anything, it’s KU that could suffer from the setup, as several high school players and their families in and around the area who may have chosen to attend KU’s opener if it were on Saturday now will not be able to.

It is what it is, though, right?

The bottom line remains unchanged. Whether on a Friday or a Saturday or a Wednesday morning at 5 a.m., KU’s football program still will have to first show fans that there’s a reason to pay attention and attend games before anyone on either side spends too much time sweating the schedule.

That part’s up to Leipold, his staff and the Kansas players. Three weeks into his time as the new KU football coach, all those involved seem excited about the challenge.

It stinks for the fans who refuse in principal to pay-per-view.

Fair enough, but that's a whole other issue that is not impacted by the day the game takes place.

Do we really want Coastal Carolina on National TV? How many times do we need to lose to these guys in front of a television audience? That's a plus?

John, here are my answers. No, it is on "low definition" streaming. 3, but KU has alot of young talent, 0-0 at start of game. No, ESPN+ = ESPN Minus, KU should have said No = we want Saturday Night Games.

College football is Saturday afternoons in the sun. I bought my season tickets with the exceptions the home games will be played on a Saturday. I enjoy getting together with other KU supporters at the alumni center before heading to the games. Friday night changes everything - given many people still work and do not live in Lawrence and have to commute for the game. The all mighty dollar makes all of the decisions - damn with the fans. Good thing I dropped ESPN+. I guess if I follow the game at all it will be via Brian Hanni and the currently free airways.

While Friday night might not be ideal compared to some other options, some people would be thankful to have options that aren’t available to everyone. I believe national tv does mean more revenue for the program which is a lot more important than most of us care to think about.

I’m also glad that the players and staff aren’t planning to lose, but instead are preparing to compete. There is a very real phenomenon known as target fixation.

Fridays are for High School Football. Plain and simple. BUT, anything to help this PROGRAM!!! KU needs to do anything in their power to get going JUMP start this PROGRAM, if FRIDAY night is 1 of those things then do it!!!

Lets not make this a common thing, we want to have the coaches streaming and going to live HS games, U build PROGRAMS with 4-5 year kids. U make me choose between watching my son play on Friday night and KU, my son wins every time...