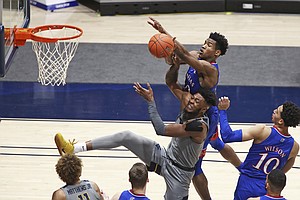 Earlier this week, I received a call from an NBA scout who was interested in hearing more about former Kansas guard Marcus Garrett.

This kind of call has been fairly common throughout my time covering Kansas basketball, and the conversations and questions they ask are typically the same.

The basketball part of these potential draftees is their business and expertise. NBA teams have scouts and GMs and coaches who know loads more about how to evaluate talent and skill than the rest of us.

But it’s the character questions — how are their interviews, how did they treat people, how were they off camera, etc? — that scouts occasionally want to find out more about.

The answers to those types of questions in this case, no matter who they're asking, only figure to help Garrett’s case for getting a shot with an NBA franchise. And, with him, it will all come down to the fit and needs of the teams that consider him.

It’s no secret that Garrett’s jump shot left a little to be desired throughout his Kansas career. If he were a better shooter, he would be a first-round pick. But his defense, athleticism, IQ and versatility, along with his high-quality character, appear to be keeping him on the radar of at least a few NBA teams and draft analysts.

We know Garrett will be eligible to be drafted on July 29, when the 60 picks in this year’s NBA drafts are made.

The Athletic’s Sam Vecenie had him at No. 55 in his latest mock draft and NBADraft.Net’s most recent mock has Garrett slightly higher at No. 52.

But there are three other Jayhawks who we’re still waiting to hear from regarding their decisions to stay in the draft or return to Kansas.

Here’s a quick update on the status of Ochai Agbaji, Jalen Wilson and Arizona State transfer Remy Martin, none of whom are showing up on any of the mock drafts I’ve seen.

Agbaji continues to have the toughest decision to make of the three simply because, at this point, he has the most NBA potential.

The size is there. His shot is already good and has continued to improve. And his IQ and understanding of how to play would allow him to fit with any team, particularly because he is also a fantastic teammate.

The question for Agbaji isn’t so much if he has what it takes to make it to the league as much as it is whether now is the right time to strike.

The Kansas basketball archives are full of examples of players in positions similar to the one Agbaji is in, and features guys who have landed on both sides of the coin, from picking the right time to return and the wrong time to leave.

In one way or another, it seems to have worked out for all of them, with guys like Malik Newman and Wayne Selden finding quality careers overseas after missing out on extended NBA opportunities.

The KU veterans who returned to school for one more run, however, have seen that decision pay off big time.

Devonte’ Graham, Svi Mykhailiuk and Udoka Azubuike, just recently, all considered leaving KU a year earlier than they did. But their decisions to stay and put the feedback they got from NBA evaluators into their final seasons at KU turned all three of them into millionaires.

Each individual path is different. And there is no blanket answer or foolproof blueprint for any player who is making this decision.

Because of that, Agbaji, who is expected to get a combine invite, likely will take his decision at least through the end of the month and potentially all the way to the July 7 deadline.

I heard earlier this week that Wilson was one of the 30 or so players invited to the G League combine, which is slated for June 19-21.

NBA teams each recently submitted a request of 70 players that they would like to have attend the league’s pre-draft combine in Chicago, which will run June 21-27. Once the votes are tallied by the league, the invitations will go out to those individuals who were selected.

According to reports, the top performers at the G League combine will be invited to participate in the NBA combine, which figures to field 70 or so draft hopefuls playing pick-up games, running through skills tests and meeting NBA officials.

Because this year’s draft and combine were pushed back a month, it is believed that the combine invites, which have not yet been made public, will go out to more international players than in a normal year.

It’s certainly possible that Wilson, who has a wide range of talents and skills, will be able to play himself into an NBA combine invitation. And if he does, he will put himself in win-win territory. At that point, he’ll either perform well enough to land on the draft radar or gain valuable experience and feedback that he can take with him back to Kansas for the 2021-22 season.

An interesting note here is that Wilson is pegged as the No. 50 overall pick in the 2022 NBA draft by NBADraft.Net.

If he elects to return to KU and turns in another solid season, it’s not much of a stretch to seem him move up the board, possibly even knocking on the door of the first round.

I haven’t seen or heard much on Martin since he committed to KU and I continue to believe that he’ll be wearing a Kansas uniform when he plays basketball during the 2021-22 season.

Already a well-known prospect, Martin has an opportunity at KU to showcase himself in a different way than he did at Arizona State.

With the Sun Devils, Martin was often the show. He played on the ball and needed to score for ASU to be successful.

His role at Kansas, provided he becomes a Jayhawk, will include plenty of opportunities to score, but, at his size, NBA scouts are likely going to want to see him focus his efforts on being a pass-first, true point guard.

With so many options and so much versatility around him in the Kansas lineup, Martin should have plenty of chances to showcase elite decision-making and play-making skills.

And that can only help his draft status for the 2022 draft.

Despite the crazy amount of turnover this offseason, the Jayhawks have scholarships earmarked for all three players.

If they all return, Kansas will likely hold on to its spot as a preseason Top 3 team in the nation heading into the 2021-22 season, which unofficially begins with Late Night in the Phog on Oct. 1 and opens with an exhibition game against Emporia State on Nov. 3 and the regular season opener against Michigan State on Nov. 9 at the Champions Classic in New York City.

Where is Dotson these days?

He played a bit for the Bulls this last season, 2-way contract. Spent time in the G-League as well.

Are there many examples of players that suffered from returning to school?

I don’t criticize players for leaving early - I’ve read articles that document their opportunity is maximized after 3 years, but am not aware of players that hurt their chances by returning.

Matt - Have you heard anything about those guys playing or training together at all?

Another good and informative read Matt. Much appreciated.

Dirk, the only guy that comes to mind is Jacque Vaughn. His junior year he was Big 8 player of the year and considered a lottery pick. If you will recall, he read Frost's "The Road Not Taken" at the press conference to announce his return for his senior year, and KU was instantly hailed as frontrunners for winning the title. Nobody was going to beat us. That September he tore ligaments in his wrist while playing in a pickup game and missed the first 10 games. After that, he just wasn't the same and we flamed out in the Sweet 16 (I still hate Miles Simon and Mike Bibby!) and tumbled in the draft to the 27th pick.

I truly believe that was the case study for young athletes everywhere to strike while the iron is hot, though if memory serves, guys like Matt Leinart took out big insurance policies to come back for their senior campaigns.

In my opinion, Dotson left a year too early. If he had stayed at KU one more year, and had a remarkable season, I think he could have been a first round pick easily.