Kansas basketball coach Bill Self says it's time to 'stir it up;' but what might that mean? 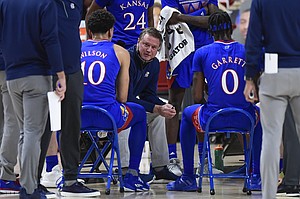 Kansas' head coach Bill Self talks to the team during in a timeout in the first half of an NCAA college basketball game against Texas Tech in Lubbock, Texas, Thursday, Dec. 17, 2020. by AP Photo/Justin Rex

On Saturday afternoon, shortly after Oklahoma handed No. 9 Kansas its third consecutive loss in Big 12 play, KU coach Bill Self said he might explore making some lineup changes before the Jayhawks’ next game on Thursday against TCU.

But don’t let the talk of a new lineup fool you into thinking it’s a guarantee that we’ll see a couple of new faces in KU’s starting five in the near future.

“I think we need a new boost of energy,” he said. “(We) may need to shake things up a little bit lineup-wise.”

But we also might not see any changes because the most powerful thing that Self said in the wake of KU’s latest loss had to do with how he would determine whether lineup changes were necessary.

“I think it's time to go back to the practice floor determines who plays,” Self said.

If that’s the way they proceed, it’s entirely possible that the five starters who have started 14 of the 15 games for the Jayhawks so far this season will rise to the challenge and prove that they deserve those spots with their performances during KU’s upcoming practices.

If they don’t, they risk being replaced. But if they do, it could do wonders for this team moving forward.

Call it a clean slate. Or a do-over. Stats to this point do not matter. Junior guard Ochai Agbaji may lead this team in scoring at 14.5 points per game right now. And Jalen Wilson’s season scoring average still may be in the low teens (13.1) on the strength of his strong play during the nonconference portion of KU’s schedule. But those numbers today don’t mean any more or any less than Dajuan Harris’ 1.9 points-per-game average or the 3.9 points and 2.6 rebounds Mitch Lightfoot is averaging this season.

It’s all about opportunity at this point. And all nine players who currently make up KU’s rotation, from Marcus Garrett, Christian Braun and David McCormack to Tristan Enaruna and Tyon Grant-Foster, all have the same opportunity in the week ahead.

Play hard and play well in practice and you’ll play in the game.

“You know, you go into a season and you want there to be five starters,” Self said Saturday. “You want there to be a little separation between your starters and your bench. And there has been for the most part this year. But (the play from the starters has) been too inconsistent of late. So I think we just need something to stir it up. That’s not being negative. It's just something to stir it up and try something different. And I don't know what that will be yet.”

It might be that the willingness to even talk about doing is the change that KU needs.

After all, Self said Saturday that his team’s confidence was shaken a little right now. But instead of them continuing to worry about wins and losses, Self wants them to get back to focusing on playing winning basketball.

That means a lot of things and can mean different things to different people. But for those around Self it primarily means elite execution in four key areas — defense, effort, attitude and toughness.

“Yeah, our psyche’s probably a little fragile right now,” Self said Saturday. “But good gosh, doesn't everybody’s psyche get fragile over the course of a marathon? I'm not going to use that as an excuse. We need to get some guys’ heads right. And I don't mean from a bad-attitude standpoint. But where we're thinking the right things more. That's obviously a concern, but you know that's the way it is everywhere. We just haven't had to deal with it much here.”

This team still has time to put it all together. Plenty of teams — even KU teams — have hit rough patches in January and February and still found a way to turn things around to the point where they’re peaking in March.

As Self put it Saturday, “it’s not lost by any stretch.”

But it is time for this group to find it again. To find their confidence. To find a rhythm. To find whatever helped the Jayhawks roll through non-con play with tough wins over ranked teams that carried the kind of swagger that Kansas is known to have.

Whatever it means and whatever it leads to all starts during the next few practices.

These Jayhawks will be this season what they decide to be this week.

Senior guard Marcus Garrett says 'something has to change' after KU's loss to OU by KUsports.com

So far from my humble observation, the last 2 loses, werent' too bad, there were positives, mostly from offensive pov: basically we can score easily when we cut, we throw good passes, we screen good screen, slip screens... and none of those are weaving craps and low-post feeds.
What's killing us in most loses: giving up TOs (again, weaving craps, no good screens), outrebounded, defending 3s and not making enough 3s, plus ref's favoritism.

What's wrong with our defense, that's correctable - that's where coach BS is genius in designing defense.

Bottomline is, if we increase our offensive pace a bit, and have 'no mercy' attitudes on both ends, launch attack - score high-margin from the beginning, fans would relax and enjoy March.

Remember, basketball is about scoring, who scores the most will win. It's not who can defend the best.

Self’s team can play better team defense but it won’t be elite because this squad lacks big-time athletes. Wilson and Braun, for example, have great attitudes but are not the knees bent, staying low, quick jocks with great lateral movement. And it looks worse next season...

KU lost two All American type players who brought elite speed and power to every matchup. Those advantages are gone, and the NCAA mess is having a lag effect on the pipeline to replace them. It is unrealistic to expect this team to perform at an elite level with their pace of play and lack of dominance inside. We are SO SPOILED by the consistent ability of KU's coaches to find emerging talent that is not quite in the top tier of the charts to go alongside those one-and-done talents who were willing to come to Lawrence for the coaching to get them to the top of the draft. Having said all that, I have confidence that Coach Self and his staff are among the best at getting the most out of the players on the roster. They'll figure out a course correction and this team will end up as a 3 or 4 seed in the tournament. And, I commend them for giving us high quality basketball in the midst of a pandemic. Rock Chalk!

Commit to starting Harris as PG. He's our only true PG & we play so much better with him running the show. Move Garrett back to SG & free him up to score & play defense.

Play faster, run more, get in our offense quicker. Won't make us an elite team, but gives us a much better chance to win & play more to our current roster's abilities.

I think a zone may help us stop the parade to the basket that all teams are doing to us. They are all going downhill with alot of success against us.