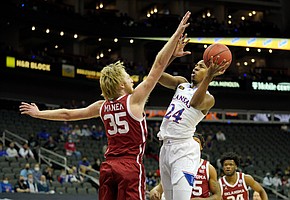 Kansas freshman guard Bryce Thompson goes in for a shot attempt versus Oklahoma's Brady Manek during the Phillips 66 Big 12 Basketball Championship at the T-Mobile Center in Kansas City, Missouri on March 10, 2021.

The Tulsa World caught up with now-former Kansas guard Bryce Thompson on Tuesday night to get a little more insight on the former five-star prospect’s decision to leave KU.

In an interview with Kelly Hines, who covers all things Tulsa for the paper, Thompson said the fact that basketball was “stressful” for the first time in his life left him believing that a fresh start would be good for him and his game.

In the interview, Thompson said he was at his best last season when he “was just playing basketball” and not thinking too much about what he was doing.

Injuries and limited minutes on occasion kept him from finding his rhythm throughout the season, and Thompson, who averaged 4.7 points in 17.1 minutes per game in 20 games at Kansas, said he hoped to pick his next school in the next couple of weeks.

Thompson told Hines that his phone has been “ringing off the hook” since news of his decision to enter the transfer portal first surfaced.

A source told the Journal-World on Tuesday morning that Thompson was likely headed to Tulsa, but the 6-foot-5 combo guard told Hines his second run through the recruiting process was “wide open.”

“I’m just kind of weighing all my options with my family and trying to make the best decision moving forward,” he said. “I definitely want a place where I can be comfortable and just be playing. It’s a fun game. It shouldn’t be super stressful. There are times where I’ll be nervous because that’s natural, but for the most part it should just be calm and just playing.”

So basically having the expectations of a highly ranked recruit and the yearly expectations at KU were too much for him. That's what I just read. Wish the kid the best, but if you want to get anywhere in life it can't just be all fun. You have to put in the work and grind. Maybe KU just wasn't the place for him after all. Hopefully the next few seasons go better for his happiness and basketball career. Rock Chalk!

Pretty much the same as I was thinking when I read the article. It was tougher than he expected so rather than buckle down and earn the time he chose to look for someplace easier. That attitude will raise big questions with NBA people.

Some guys just can't handle the work ethic and expectation at KU. Like, yes we have very high standards here, we expect to win the conference and be a high seed and go to final fours and win championships. That takes a lot of work. You have to earn your spot here. Self is known for being an intense coach, especially in practice. You can't expect it to be a breeze like in HS when really just your talent and athleticism made you better. You have to do a lot more. If you weren't enjoying the journey, then yes clearly this journey isn't for you. But you can't expect it to be FUN all the time. In between that is a lot of grinding. When you work your ass off and win, the fun will come.

To sum up: Lawrence is stressful and not fun at all. You Lawrencians/Lawrencers/Lawrenceanians need to lighten up!

In other words he didn’t get playing time.

Who signed this guy anyway? No due diligence?

When is it considered a trend? Two 5-star transfers in three years. Hmmmmm.

This program is a complete mess. Thank goodness we have a lifetime to straighten it out.

Grimes was not and is not the player that the Jayhawks thought they were getting. He wanted to be the point guard and that wasn't going to happen (because he isn't a good point guard). He figured out at Houston where he played against much weaker teams that he could be a decent off guard. He was still inconsistent but that is not magnified as much playing in the AAC. Before anybody gets going about Houston making deep into the tournament this year bear in mind that they didn't play a single digit seeded team until the final four and they got their butts whooped.
As for Thompson, he sounds like all the other "kids" of his generation. I want all the rewards and praise without the hard work and perseverance.

2 - 5* transfers in 18 years is another way of looking at the “trend”. It is crazy what is happening with transfers though some argue it is appropriate given the fact that most coaches don’t have lifetime contracts and do tend to move about.

IIRC, a big chunk of the rosters in the NC game were transfers, but who wants that trend?

It’s a good thing we have all the medium recruits - neither high nor low, who have successfully won all the championships.

IIRC - Coach Self talked about the extra stress the players were feeling this year due to the isolation, crazy testing, and other pandemic pandemonium. It should be better next year no matter where he plays. Just a sha

Just a shame there wasn’t more Russell in him.

At least these 2 left early rather than later. Chemistry killer when you have someone loitering instead of developing.

Sounds like another weak-minded Gen-Z'er. Don't let the door hit you in the ass on the way out, Bryce!

Still baffled by this one

The rankings in high school are based on pure talent, not work ethic. Look what happened with Udoka because he was willing to work. Give me him or a Dmac any day.