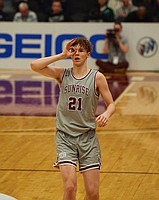 Sunrise Academy forward Zach Clemence celebrates a 3-pointer during his junior season. Clemence, a 6-foot-10, 4-star forward from Pleasanton, Texas, orally committed to Kansas on May 11, 2020. by Contributed photo

While talking with new Kansas basketball commitment Zach Clemence on Monday morning about his decision to pick KU, I asked him if his game compared to any player that Kansas fans might know.

Fair enough. After all, players like Clemence — long, tall, athletic forwards who both can shoot from distance and play down low — are starting to become a more regular part of the game and are popping up on teams around the country at all levels of basketball.

As the game continues to evolve and spacing becomes more important than ever, the idea of creating mismatches by dragging big bodies away from the rim to cover taller players who can shoot has become awfully appealing to coaches.

That includes KU coach Bill Self, who went hard after Duke’s Matt Hurt in the last recruiting cycle and has started to add players with height, length and legit shooting ability as often as possible.

Clemence is the latest and perhaps most obvious Jayhawk in that mold. And he absolutely loves the way the game has changed.

“When I was little, they would just put me in the post because I was always the tallest player,” recalled Clemence, who said he started playing basketball at age 8. “But I’ve always been drawn to playing on the perimeter and shooting the ball.”

Kevin Garnett he is not. But that’s the idea here.

Even if Clemence won’t say it.

“He has the same name, kind of looks like him and kind of plays like him,” Barnwell said. “We kind of give him a hard time, saying, ‘Hey, that’s your big brother. You play like him a little bit, can shoot it, can handle it, post and are kind of fiery competitive at times, too.’”

There certainly are worse comparisons.

After a solid one-year career at Gonzaga, Collins, a lottery pick, has been a strong contributor for the Trailblazers during the past few seasons, with the 2019-20 season being by far his best. Before the season was put on hold in March, Collins was averaging 9 points and 4 rebounds per game while shooting 47% from the floor and a career-best 43% from 3-point range.

Another player whose name came up in the conversation with Barnwell was former KU All-American Dedric Lawson.

Barnwell said Lawson was craftier in the post and a little bigger than Clemence, but that Clemence shoots it better and is more explosive than Lawson.

“He probably saw that that position was a valuable position for what coach Self does offensively,” Barnwell said of Clemence’s thinking.

Whether you’re talking Garnett, Hurt, Collins, Lawson or any other player who belongs on that list, they all are obvious examples of basketball’s latest trend.

“Where the game is going, Zach’s value is high,” Barnwell said. “The game is going positionless and all five spots have to be able to shoot and Zach’s smart enough to know that being a big that has complete versatility is something of great value right now.”

Barnwell said he thought that one of the biggest influences in the changing role of basketball's big man was the rise of highly skilled European players at the NBA level. And he added that there were some Euro tendencies in Clemence’s game, as well.

“Just a utility man,” Barnwell said. “You look at him and he kind of looks a little goofy, but he’s just really good at a lot of things.”

Beyond that, Barnwell said Clemence, who “works his tail off,” will quickly become a player that Kansas enjoy following.

“You always root for kids like that, and KU fans are going to love him,” Barnwell said. “He’s got such a great smile and he’s a joy to be around and a joy to coach.”

2021 Zach Clemence Is NEXT by TexasHoops Television

Being able to shoot is nice, but maybe the biggest thing learned and hopefully not lost from last year is that the real key is being able to defend the perimeter.

Dok obviously had trouble shooting even from 10-15 feet, but it became his ability to slide and defend the perimeter against any player that was the real difference last year especially late.

With today’s game becoming so 3pt dependent, it would seem advantageous to talk about individual stats in terms of ppp as well as team stats. A 40% 3pt shooter is about 1.2ppp, 33% us 1.0ppp. Dok was about 1.6ppp or about the equivalent of 53% from 3. Change is slow.

Welcome Zach! I like his game big time, blocking shots, smooth from outside, moving without the ball to space, all great for his age. Now just build up about 25 lbs of muscle and look out! Rock Chalk Zach!

I would like to see some film on Zach from Sunrise this past season. Not sure how old those highlights are from his Texas team, but based on those videos he definitely will be in for a shock to the system when he's playing against bigger and better athletes in college.

It's good to get his recruitment out of the way so that he can really focus on his body and his game this year.

This was from January. It's an actual game and I found it a lot of fun to watch given the current lack of live sports in our day-to-day lives. Enjoy!