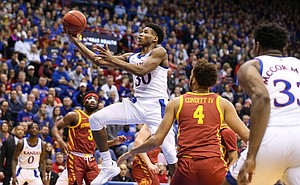 Kansas guard Ochai Agbaji (30) coasts to the bucket between the Iowa State defense during the first half on Monday, Feb. 17, 2020 at Allen Fieldhouse. by Nick Krug

Now that several members of the Kansas men’s basketball team have shared their plans for next season, it’s time to start looking at where the national pundits think the 2020-21 Jayhawks fit into the national landscape.

In short, nearly all of them believe Bill Self’s bunch is still a Top 10 team.

Most of the major outlets that coverage college basketball have put out their early Top 25 lists for next season and the Jayhawks have landed in the Top 10 in nearly all of them.

Jeff Borzello, of ESPN.com, currently has the Jayhawks at No. 6, up four spots from a previous edition of his way-too-early Top 25 list.

Like most analysts, Borzello is curious how KU will replace the production by Devon Dotson and Udoka Azubuike. But he's banking on Self to figure it out.

"He has lost players to the NBA before and not missed a beat," Borzello wrote. "We expect that to continue. He also has plenty of talent left on the roster. Marcus Garrett, arguably the best defensive player in college basketball, should be one of the best overall players in the country next season, and Ochai Agbaji decided to return and not even test the NBA draft waters. The Jayhawks are bringing in two very talented perimeter pieces in five-star guard Bryce Thompson and elite junior college prospect Tyon Grant-Foster."

The one thing that appears to be keeping Borzello from putting KU any higher is not knowing exactly how Dotson and Azubuike's roles will be filled.

"There are two big questions I have for Kansas," he wrote. "First, point guard play. Garrett can certainly initiate the offense, but expecting him to be a dynamic playmaker in the mold of Dotson, Devonte' Graham, Frank Mason III, etc., seems to be a lot to ask. Then there's inside play. Azubuike was the most dominant physical force in college basketball; is David McCormack ready to fill his shoes?"

Prior to Borzello's change of heart, the highest the Jayhawks had been ranked was No. 7 by both Gary Parrish of CBS Sports and Andy Katz of NCAA.com.

And KU’s lowest ranking among the major outlets came from The Athletic’s Seth Davis, who had the Jayhawks ranked No. 11.

Here’s a quick look at some of the thinking behind those rankings.

In ranking the Jayhawks’ 7th, Katz said: “... we do know the top defensive player in the country — Naismith Award winner Marcus Garrett — (is) back. David McCormack should star in replacing Udoka Azubuike. And the addition of Bryce Thompson means KU will be the pick in the Big 12.”

Parrish also pointed to the addition of Top 20 prospect Thompson as a key part of next season.

“The arrival of 5-star guard Bryce Thompson, combined with an experienced core of Ochai Agbaji, Marcus Garrett, David McCormack and Christian Braun, should provide Bill Self with enough to compete for yet another Big 12 title,” Parrish wrote.

Davis also mentioned Garrett and Thompson, but threw a few other names into the mix, as well.

“The coaches are also hoping that Dajuan Harris, a 6-foot-1 freshman who redshirted last season, will play a lot of minutes,” Davis wrote. “Beyond that, the Jayhawks will be loaded on the wing, and both of their newcomers (Thompson and junior college transfer Tyon Grant-Foster) will have a chance to start. It will be especially interesting to see whether 6-9 senior forward Silvio De Sousa can end his controversial career on a high note.”

And SI.com’s Jeremy Woo, who ranked the Jayhawks ninth, brought up yet another young Jayhawk full of potential as justification for his Top 10 ranking.

“(Tristan) Enaruna has breakout potential as a sophomore assuming his minutes and comfort level trend upward,” wrote Woo. “This won’t be the most loaded Kansas team ever, but it should be plenty solid.”

Speaking of looking ahead, the 2020-21 Jayhawks are in a familiar spot in ESPN.com Bracketologist Joe Lunardi’s first glance at the 2021 NCAA Touranment.

Projected as a No. 2 seed in the Midwest regional in Minneapolis, the Jayhawks are one of three blue blood programs (Duke and Kentucky) seeded 2nd in Lunardi’s first guess for 2021.

Joining the Jayhawks near the of the bracket are recent champions Villanova and Virginia — both 1 seeds — along with Big 12 foe Baylor, a 1 in the South, and Gonzaga, a 1 in the West. Wisconsin is the other No. 2 seed.

“We recruited pretty well and we’ve got depth on the perimeter and we’ve got four big guys we can certainly play,” Self recently told ESPN’s Myron Medcalf. “The team has a chance to be pretty good.”

1] Hey Lunardi.....how about a prediction if KU will even be allowed to participate in the 2021 tourney?

2] Poor Mitch, he gets over-looked again. He is just as solid core vet as the other guys yet not a peep about him!

3] I feel like Bill Murray in Groundhog Day. Get up, stay at home, find things to do, look for toilet paper, long for baseball, go to bed. Repeat, etc......

4] Have watched the 2008 title game maybe a dozen times now......I am always struck at how close we came to losing that game in regulation!

Right on Tony! Another overlooked kid is Jalen Wilson, who people talked about being a possible star last year before his injury.

Interesting that Katz calls us the pick of the Big12, then list BU as a 1 and us as a 2. The teddy bears should be good again next year. Maybe they’ll get within 1 game of a championship 😉.

One of the beauties of this team is that Coach has a full roster to work with. 13 options this year whereas last year we were down to 8(?). Similar limitations in years past for various reasons. It is always interesting to see who steps up.

It has also been interesting to listen to Coach’s thoughts on the play of the team. So many things that he sees that we don’t, though some will complain and criticize anyway. Ultimately those are the things that make a difference in success; both in terms of PT and Ws.

There are some things that Dok & Dot did that were crucial and will be for every team in the future:

1. Can the big defend the perimeter? Doesn’t matter if the big can shoot the 3, but he must be able to defend it. Dok did this masterfully last year, especially in the 2nd half, not only against other bigs but also against smaller, quicker players.

2. Who will be a reliable ballhandler late in the shot clock and game in order to a) create O out of nothing and b) make a high percentage 80%?) of his FTs. Real confident in Marcus doing all the little/Self things to lead the team, and many of the big things too. Not as confident in these 2 crucial aspects; haven’t seen it previously.