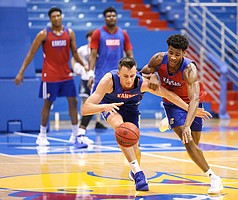 Kansas forward Mitch Lightfoot and Kansas guard Ochai Agbaji compete for a ball during a scrimmage on Tuesday, June 18, 2019 at Allen Fieldhouse. by Nick Krug

The first official practice of the 2019-20 Kansas men’s basketball season lasted one hour and 59 minutes.

But don’t tell that to the six newcomers on the KU roster going through a real Bill Self practice for the first time.

“They did well,” Self said of the KU rookies shortly after Thursday’s first practice wrapped. “But I think about an hour into it they thought we’d already practiced two and a half hours. And at the end they probably thought we went four.”

The reason for that was simple in Self’s estimation.

“The toughest thing for all young kids to overcome early is just the pace,” he said. “Everything is fast. Even your pass-and-go-aways are quicker or whatever is at a much quicker pace. That’ll be the biggest thing (for them to pick up), but they did well.”

While the speed and conditioning demands of Day 1 proved challenging, the KU veterans said the attitudes and approach of the Jayhawks’ newcomers were right where they needed to be.

“They’re doing great,” junior guard Marcus Garrett said Thursday. “They did great today. Knowing that they didn’t know things, they didn’t act like they did, they were just learning on the fly and practice went smooth.”

Added sophomore guard Ochai Agbaji, who, in his own right, seems like a veteran on this roster: “Today was their first day. We didn’t have a lot of subs, but we got up and down and got after it. The workouts and practice are different. A lot more stuff tailored to game-like stuff and we get more into scrimmaging and stuff like that. … They’re all working hard every day.”

“It’s finally here,” Agbaji summarized of the overall feeling on Day 1. “It feels like summer was long a little bit, with all our workouts and new guys coming in. I’m just ready for it to get going, and I’m excited that we got started.”

Thursday's practice came three days after Kansas received a Notice of Allegations from the NCAA regarding the school's recent recruiting practices, and Self, who released a statement on the matter on Monday evening, answered a few questions about the situation after practice.

The Jayhawks entered the opening day of practice with all bodies fresh and available but did not emerge completely unscathed.

Neither player seemed too concerned about their injuries, with Moss moving well while walking to the locker room with his teammates after practice and Lightfoot smiling about the shiner above his left cheek as he walked out of Allen Fieldhouse to go back to the dorm.

With the 35th annual Late Night in the Phog now just one week away, the Jayhawks did discuss the annual season tip-off event a little during Thursday’s practice, Self said.

While most of the talk was about the routine, how to put on a good show and what’s most important about Late Night, Self hinted at some news of interest that could come any day.

“Hopefully we’ll announce who’s going to be entertaining us soon,” Self said Thursday.

Asked if he knew who the musical act would be this year, Self simply said: “I’ve got a good idea.”

Friday afternoon, it became clear Self did know. In yet another Rock Chalk Video production starring Self, the KU coach was shown in a gold chain and a record store searching for CDs when he winked at the camera to load a montage of legendary rapper and producer Snoop Dogg, who will be in Lawrence for Late Night 2019.

This year’s Late Night is set for roughly 6:30-9:30 next Friday and will again feature all of the video skits, team dances and scrimmages you have seen in years past.

For the fourth year in a row Kansas Athletics will host Phog Fest on the front lawn of Allen Fieldhouse, with activities starting at 11 a.m. and ending at 4 p.m.

Phog Fest will have activities for all fans to enjoy leading up to Late Night, including the Hawk Zone, radio remotes and music.

The event also will include food trucks, giveaways from a variety of sponsors, interactive displays and more throughout the day.

Phog Fest and Late Night are free to the public. Doors open for KU students at 4:30 p.m. and to the general public at 5 p.m.

It may have been just the first practice but the squad brought the energy got after it 💯#LockIn 🔒 | #KUbball pic.twitter.com/wvS10IgJJR

KU head coach Bill Self on impact of notice of allegations by KUsports.com

"..senior forward Mitch Lightfoot caught an elbow to the face that required six stitches after practice." Good grief. You're going to look like Prison Mitch if you keep that up.

For those too young to remember the 1989 NCAA Post Season ban {and those too old, for that matter :-) } it was a different feel in that our NCAA streak was only a handful of games, we got to keep our Final Four and National Title, Uncle Roy become our new Head Coach and, with Danny's graduation, it could have almost been considered a rebuilding year. Even so, at 19 wins we could have been included in the Tourney if no ban was in place.

2019, however, is much different. We have a team with a legitimate shot at the National Title, our NCAA appearance streak is unprecedented, our head Coach supposedly isn't going anywhere and anything less than a Final Four appearance will be considered a failed season. Also, the real possibility of loss of games from last season, loss of scholarships from this and future seasons and a potential suspension of our HOF Coach is truly daunting.

I understand loss of games if there was a player on the court who was ruled ineligible. You might not have won those games if that player wasn't there. But no such players ever played last year. Could the loss of games penalty be applied to last season? And if so, how and why?

The thought of loss of games seems to be rooted more in the previous year when SDS did appear and prominently.

Guns and scars! The ladies really aren’t going to be able to resist now 😎

I'm not worrying one bit about the NCAA. For me, I just want us to go out and throttle everyone. The NCAA can do whatever they want. I will get my joy from 25-30 wins this season.