Jayhawks’ beat down of Boston College a real attention grabber 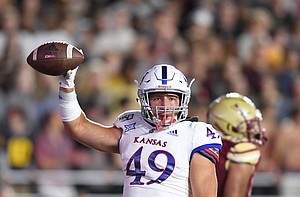 (Boston, MA, 09/13/19) Kansas Jayhawks fullback Hudson Hall (49) celebrates after scoring a touchdown against the Boston College Eagles during the first half of an NCAA football game at Boston College in Boston, Mass., on Friday, September 13, 2019. by Chris Evans

OK, Kansas Jayhawks. You have our attention.

For the first time in who knows how long — years if you’re going by the calendar, 1,000 lifetimes if you’re measuring in heartache — the Kansas football team stepped onto the field and thoroughly dominated an opponent to the tune of Friday night’s where-did-THAT-come from 48-24 road win at Boston College.

When is 2-1 a better record than 2-0? When the 2 comes in convincing fashion just six days after the 1 that nearly sent everybody running for the exits.

Maybe it’s appropriate that this is the first year of the no re-entry, beer sales experiment at David Booth Kansas Memorial Stadium. Maybe this will be the year that Kansas fans won’t care where the exits are.

That word is important right about now because, through three games of the Les Miles era, we’re not quite sure what to make of this KU football team.

We know they’re imperfect. Miles likes to use that word himself.

We know that they’re tough. You don’t respond to a brutal home loss to Coastal Carolina one week with a stellar effort like Friday night without being tough as hell.

And we know that, against all odds, they’re coming home, with an extra day of rest and preparation, for a chance to move to 3-1 with a home game next Saturday against West Virginia.

If there’s a disappointing part about Friday’s wild win back east it’s what it wasn’t. Had Kansas taken care of business against Coastal Carolina in Week 2, the win over BC would’ve made the Jayhawks 3-0. Heads really would’ve been spinning then.

Then again, had they taken care of business against Coastal Carolina, they may not have had the drive of disappointment, embarrassment and anger to carry them to Friday’s victory.

But alive. And interesting. At least for now.

Big 12 play promises to bring new challenges, tougher opponents and even less room for mistakes and miscues. The Jayhawks know that. Miles certainly knows that. And things are only going to get harder from here.

So let’s hold off on the bowl talk and win predictions for a little while longer. After all, things have not changed enough yet for anyone to know for sure that more days like Friday are ahead for this football team.

It’s possible, of course. However improbable that may be. And the kind of confidence a team can take from handing out a beat down like the one the Jayhawks delivered on Friday can be significant. In many ways, it felt significant while the Jayhawks were running all over the Eagles, like a turning point of sorts or, at the very least, a game and date you might want to circle to come back to if things really do finally turn.

There is, of course, a long way still to go before any real declarations about a turnaround can be made. Years, perhaps. After all, if a team can flip the switch and transform so dramatically in a positive direction like KU did from Coastal Carolina to Boston College, can’t it bounce the other way just as easily?

Time will tell on that. And while we wait for the verdict, Miles and company will continue to work to do the one thing that hasn’t been done in a decade around here: find a way to sustain success.

Friday night provided a glimpse of what’s possible. The question now is: When will we see it again?

If the answer is next Saturday against West Virginia, people may really start to believe things are happening.

Points. Pride. Fight. These were all things the KU football fan base needed to see from their team on Friday night, and KU delivered with its strongest sign of real progress in who knows how long.

The Jayhawks have our attention again. How long can they keep it?

"For the first time in who knows how long - the Kansas football team stepped onto the field and thoroughly dominated an opponent ..."

Didn't we dominate Rutgers last year? It's somewhat understandable to try to develop amnesia about the past, but there have been some positives. Hopefully, we will see it again. My guess is a chunk of HCLM's job this year it teaching the team how to properly prepare for this level of competition. How to prepare to win.

My intuition is that Les Miles' job is even more rudimentary than that at this point. Not simply preparing to win, but *how to prepare* to prepare to win. It's not just a point made for argument's sake, or some hair-splitting difference just to have something to say. But erasing the loser's mentality out of these players is a difficult task, because you will play like you *think* you will play. And if you think you're a loser, then you're preparing to lose. If you TRULY think you're destined to win--not a "whistling past the graveyard" kind of hope--then you can begin preparation to do so.

After Coastal Carolina, I thought the "dominant football" was a joke.

Kansas came to play! Good to see. Let's turn on the tap for those kind of games. Have no choice but to trust Miles on the long road to respectability. But when Miles was hired, *this* was the win people wanted to see in his first year.

Totally agree. I believe this program has been sorely lacking in confidence for most of this decade. The players say the right things but when things go south they have to be thinking in the back of their minds, here we go again. More valuable than the win itself, I hope this game builds confidence and instills the belief that they can actually win no matter who they line up against.

Take it Quarter by Quarter.Half by Half.Then Game by game!Whatever happens this season good or bad will be decided at the end of the season!Yeah we had a bad game last week and we did okay today!It will happen like this with a new coach this season!We will proabably have more game like CC maybe a game like today here and there but this is still a rebuilding year for us unfortunately! Its one good looking win but this still will be a long season.Well at least sabor this win! At least I will!Good win today got alot more work to do RCJH!

I think the team did better than "okay today"! The team played great. End of story

I had long forgotten how good it feels to wake up the morning after a football game win. And to have the Game Day folks talking up the Jayhawks was amazing. Coach Miles had those kids prepared! That was a confidence builder!

Well whatever lies ahead, a win when we were given no chance, even in my mind, is a treat. Im going to enjoy it. Rock Chalk.

For Fun. Here is Keegans article on the game.https://www.bostonherald.com/2019/09/14/kansas-backs-expose-boston-colleges-lack-of-speed-in-major-upset/

A good highlight reel. Carter had some very impressive passes.

they have my curiosity, beat wvu and they'll have my attention.

At least we didn't look impotent last night. Im convinced the pain from gacking up the Costal Carolina game motivated them to go all out last night. It appeared that worked well.

Who knows what the rest of the season may bring. Beating WVU next weekend would certainly turn a lot of heads. Not just in Lawrence, but around the college football world.

The pre-game meal of 100% boston baked beans did the trick!

Several of us , like me, are now eating Crow today!

I was poking around the Net to see what other media outlets were saying about the upset, and came across our old pal Tom Keegan's article: