Kansas coach Bill Self pleased with current state of recruiting 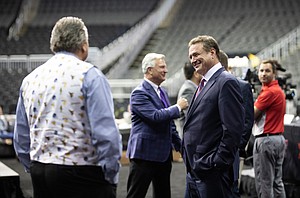 With two four-star prospects already committed despite lingering questions about NCAA allegations, Kansas coach Bill Self is feeling pretty good about where the Jayhawks sit in recruiting future talent.

That much was made clear on Wednesday at Big 12 media day in Kansas City, Mo., where Self spent roughly half of his time fielding questions about the allegations, their meaning, his legacy and the future and the other half talking about basketball.

Occasionally, the two topics collided, with KU’s current trials and tribulations on the recruiting trail being the perfect blend of future uncertainty and basketball reality.

Per NCAA rules, coaches are not allowed to comment on recruits until they sign. But Self did talk, in general terms, about the status of KU’s recruiting efforts in the current landscape.

Four-star commitments Tyon Grant-Foster, a juco wing from Indian Hills Community College in Iowa, and Gethro Muscadin, of Aspire Academy in Louisville, Ky., give the Jayhawks two quality pieces in the 2020 class. Both project as multiyear players at Kansas and both are long, athletic fast-risers who could play multiple positions at KU.

Together, they make up what 247 Sports considers the 42nd best haul in the 2020 class to date. But, as Self mentioned on Wednesday, he believes the Jayhawks are far from done.

It’s not yet known exactly how many players Kansas will need to sign in the 2020 class to fill the roster. But it likely will be in the 3-5 range.

Even though Self said KU's current battle with the NCAA might force him and his staff to "grind a little bit and maybe work a little smarter and target a little differently and things like that," the Jayhawks remain in pursuit of some top-tier talent. Most notable among them is five-star shooting guard Bryce Thompson, who recently visited both KU and Oklahoma and appears to be zeroing in on a decision in time for the early signing period Nov. 13-20.

If KU were to land Thompson, the Jayhawks’ 2020 class would vault into the Top 10, according to the 247 Sports class calculator, which projects the impact of a program landing a particular player.

Beyond that, picking up a commitment from a player of Thompson’s caliber not only would add talent to the roster but also could serve as a sign to other prospects that things are going to be OK in Lawrence.

Picking up oral, non-binding commitments and getting kids on campus as enrolled student-athletes are two different things, of course. But Self remains confident in KU’s sales pitch and what the program has to offer.

Although he did not go into great detail about much on Wednesday, Self did briefly explain the message he has told recruits and their parents during recent months.

“I’m not going to speak to any details concerning the case,” he added. “But anybody who’s ever played for me or worked for me knows how I go about my business and I’m very proud of how we conduct our business and that hasn’t altered at all.”

Self concluded: “Recruiting is hard regardless. When you’re recruiting at an elite level, you have obstacles each and every year. (The allegations are) something that we certainly explain out and are very transparent with everything going on. There’s not anybody that we recruit that we don’t tell them how it is, at least the way we know it to be.”

The game can also be viewed by replay on ESPN+ Yes you mist sign on to ESPN+ but lots of viewing on other sports as well. Plus the weekly Lots of Miles is informative.

Currently, ESPN+ is scheduled to broadcast 9 KU basketball games between now and March 4th. I would like to see it added to the "next games" box on the kusports.com home page. I need the reminder and I'm sure other KU sports fans would appreciate it.