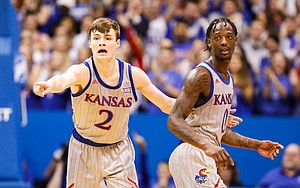 Kansas guard Christian Braun (2) and Kansas guard Marcus Garrett (0) get back on defense during the first half on Friday, Nov. 15, 2019 at Allen Fieldhouse. by Nick Krug

Three games into his KU career — head spinning, heart racing and time flying — Kansas freshman Christian Braun has gotten a pretty good feel for what college basketball is all about.

There will be new lessons learned — from both successes and failures — pretty much every game and each week for the next three months. But what Braun has picked up during the first month of KU's season has been incredibly valuable and has helped make him a key part of KU’s rotation.

Credit Kansas coach Bill Self for making sure the hard-nosed, 6-foot-7 freshman was ready to absorb everything that has come his way.

“It’s different for sure,” Braun said of playing at the college level. “But I knew coming into it there was going to be a lot of ups and downs. Coach told all the freshmen there were going to be ups and downs all year. But I've learned a lot.”

The biggest thing Braun has learned thus far is simple: don’t take anything for granted.

“The attention to detail you have to have at this level is so different,” he said.

Whether that means devouring the scouting report leading up to each game, watching intently from the bench during the action or executing while on the floor, Braun has learned that there is very little down time in college basketball.

What you might have been able to conquer with size, speed and athleticism at the high school level takes an entirely different focus in college. And while so much of that lesson comes from experiencing it for yourself, Braun has been lucky to learn firsthand from one of the biggest no-nonsense players in the game in teammate Marcus Garrett.

“Super tough,” Braun called Garrett. “All the time. Everything he does. He plays super hard.”

Those same words have been used to describe Braun’s game. Dating back to the summer, both Self and several of Braun’s teammate marveled at just how hard the freshman from Blue Valley Northwest competes.

Whether that’s defending with his nose in the chest of the man with the ball or diving into walls and over tables to save a possession, Braun, like Garrett, knows just one way to play the game. And it’s that mindset that inspired Garrett to compare Braun to himself during the exhibition portion of KU’s schedule.

“I just feel like he can do everything on the court,” Garrett said after KU’s exhibition win over Fort Hays State in which Braun tallied 8 points, three rebounds and three assists in 24 minutes. “He can pass. He’s athletic. He can defend. He can rebound.”

Braun called the comparison “awesome” and said he was thrilled to be linked to such a complete and talented player as Garrett. He also said he understood why Garrett might have said it.

“I don’t know if you’ve watched, but my defense really needs some improvement to be compared to him,” Braun joked. “But I think our mentality, when it comes to the game of basketball, just playing hard and being tough, that’s where we’re most similar.”

Although he finished with 11 points, two rebounds and an assist in last week’s blowout win over Monmouth, the 17 minutes he played in that one more than doubled his minutes played in KU’s first two games of the season.

“He’s just not where he needs to be yet,” Self explained this week, when talking specifically about Braun’s defense. “But how many freshman are? I’m real pleased with Christian.”

And Braun is pleased with where he sits heading into Game 4 of his freshman season.

He’s learning, he already has a spot in the rotation and he knows that if he keeps putting in the work and striving for consistency, more minutes will come

“I think we’ve all had that urgency,” Braun said of wanting to get things right as quickly as possible. “We all want to do our thing and just help the team in any way we can.”

KU and Braun will play host to East Tennessee State tonight at 7 p.m. at Allen Fieldhouse on Big 12 Now and ESPN+.

Pretty excited to watch this kids contributions grow over the next few years. Rock Chalk