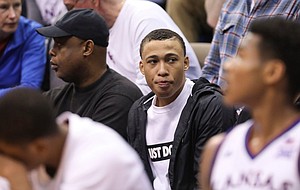 Kansas 2020 recruit R.J. Hampton watches from behind the bench during the second half, Saturday, March 9, 2019 at Allen Fieldhouse. by Nick Krug

According to ESPN recruiting analyst Paul Biancardi, Kansas basketball target R.J. Hampton has moved up the timeline for his college decision.

Hampton, a 5-star prospect from Little Elm, Texas, who recently reclassified into the 2019 class from 2020 told Biancardi that he now plans to pick a school at the end of May instead of waiting until the completion of the AAU circuit and making a decision in July.

Kansas is one of four programs in the running for Hampton’s services, with Kentucky, Memphis and Texas Tech also in his final four.

“I want to go where I fit in, can be myself and help a team win,” was the quote from Hampton that Biancardi attached to his recent Tweet.

The 6-foot-5, 180-pound combo guard who many have called the best prep guard in the country regardless of class is the top remaining uncommitted player in the 2019 class — ranked No. 5 overall in the latest Rivals.com rankings — and is the type of instant-impact player that would provide a serious boost to whichever program he chooses.

Earlier this week, 247 Sports recruiting analyst Evan Daniels entered his crystal ball pick for Kansas in the Hampton recruitment and several other recruiting analysts have said they too are leaning toward Hampton picking KU.

Kansas coach Bill Self has been recruiting Hampton and his family for a long time and has been ultra-aggressive in his pursuit of the 5-star prospect since during the past several weeks.

Landing a player of Hampton’s caliber would be an immediate lift to KU’s 2019 recruiting haul and likely would move the Jayhawks’ current class into the Top 10.

Currently, with 4-star guards Christian Braun and Issac McBride already signed and 4-star forward Tristan Enaruna committing to Kansas Tuesday night and expected to sign his letter of intent today, KU’s 2019 class ranks 29th in the Rivals.com team rankings and is tied for 11th in average star ratings of the players in the class.

With that trio on board, Self and his coaching staff figure to have at least two more spots to fill in the 2019 class this offseason.

De Sousa, who is still waiting word on his appeal of a two-year suspension by the NCAA, has said he will return to Kansas if he wins the appeal. And many people close to the program expect Dotson to be back for his sophomore season after testing his draft stock this month in Chicago.

If so desired, all four players have until May 29 to pull their name out of the draft pool, which would clear the way for their return to Kansas for the 2019-20 season.

I presume this decision comes from schools telling him they'd insist on him being on campus in early June and doesn't come from him being any closer to a final decision. Still, I think this decision increases our chances of landing him.

He will have to take High School summer school classes. He's a few credits short as I understand it. I don't think he will be on Campus all that much regardless of where he goes until about August.

Because he just reclassified, it would seem likely that he does not currently have all the HS credits he needs to graduate but will be completing them in summer school. While it is always nice to have the players together to get to know each other on and off the court, there are plenty of exceptions each year- especially for exceptional players. My guess is that he continues to play AAU ball while finishing classwork and arrives in late July or early August - wherever he lands.

Landing him would finally give KU a complete class...I wish KU would just get their incoming classes signed earlier

Kids want to play now-a-days...... we always have so much roster uncertainty each year. That's why we get them so late. Look at things right now, we have 3 guys that could come back and then minutes go away. I'd rather a kid wait than say he's in and then back out like so many do. It's stressful as a fan, coach or administrator...... but I hate decommitments.

Funny thing is that ESPN hasn't said squat about him committing to us. If Duke or UNC had landed him, it would be all over the place. We're like the red headed step child now-a-days. I hope that we have a great year with our "weak roster" everyone keeps talking about.

Are we all pretty certain Grimes is gone for good? If not, I am curious how much room we will have for him if he returns. If we get RJ and the grad transfer from Arkansas Little Rock.