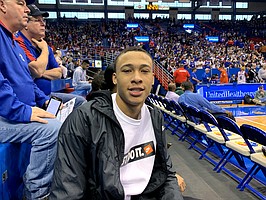 Five-star prospect R.J. Hampton, the No. 6-ranked player in Rivals.com's 2019 rankings and top Kansas target, announced on Twitter on Friday afternoon that he had picked a date to reveal his college decision.

"The time has come," Hampton Tweeted. "Watch Get Up ESPN on Tuesday, May 28. I have an announcement to make."

This news on the same day that Kansas learned that Silvio De Sousa had won his appeal and would be eligible for the 2019-20 season, sent the Kansas fan base into a frenzy. But until Hampton actually announces there no doubt will still be some uncertainty surrounding the 6-foot-5 guard's future and whether KU is a part of it.

Hampton's father, Rod Hampton, earlier this week, said his son likely would wait to see which players at his three finalists stayed in the draft and which elected to return to school. But the decision date that Hampton has announced is scheduled for one day before the deadline for underclassmen to pull their names out of the 2019 draft pool.

The Little Elm, Texas, native who just finished his junior year of high school reclassified into the 2019 class several weeks ago and has been trending toward Kansas and graduation ever since.

Although Memphis and Texas Tech remain factors in the race to land Hampton, many recruiting analysts believe Kansas will be the pick.

Hampton visited KU last December and has said he might come again in the near future, when best friend and KU target Jalen Wilson makes his visit to Kansas May 30-June 1. If he does, it appears it could be as a committed member of the Kansas program.

If he doesn't, his decision on Tuesday will likely lead him somewhere else.

One way or another, KU fans likely will know early next week whether this latest Top 10 talent is on his way to joining the Jayhawks.

That is interesting that it is the day before. Maybe he knows that others will have decided by then.

If he visits with JW and JW is on a sponsored visit, does that get into a recruiting violation? I'm guessing KU wouldn't allow it if it was, and there could obviously be other players on campus on non-official visits.

I found you comment interesting and I also wonder why the day before the NBA deadline of May 29th
is his annoiuncement. I wondered if his announcement might influence others instead of the other way around. Do you what time his announcemen is. ?

What's the current status now on available scholarships with De Sousa returning? If we land Hampton and Dotson returns, is that it? Or one more for either Jalen Wilson or an unexpected Grimes return?

IMO if Dotson Returns Hampton is not coming.

From posts, etc., that I have seen Grimes has made his decision and he is gone and he is not looking back. So Grimes is no factor.

The real question is if Dotson doesn't come is Jalen even interested. They could be teaming up for a move.

From what I hear projections have Dotson going in the top 40.....that's probably good enough to go and not take chances of getting hurt. He would pretty much be set. So I am not expecting Dotson to return. Hence, I predict if Dotson really is gone that Hampton and Jalen are coming to KU. RCJHKU!

Fine. Dotson has all the tools just not enough. By next March, Dotson alone will have this one.

Brian Wilson, I heard the opposite. Hampton said in one of his posts, that if Dotson and Grimes returned, he would be coming to Kansas. If they don't, he would probably pick another school, most likely Texas Tech.

It's sad that this year's biggest recruiting news is that Silvio is finally eligible. We should add him to this class as a recruit.[

I know, too late for that but it does seem to be a recruiting success in many ways. Silvio has a lot of fight in him. How many other players would have stayed and fought it out? He easily would have made money in the European leagues.

Jesse - to your question:

2 Pending: Grimes and Dotson. I'm not counting Dedric as he's all but gone.

Available scholarships: 2 for sure and up to 4 depending on Grimes and Dotson decisions.

Dotson comes back and we get Hampton. Too many power forwards and centers, so Wilson stays at Michigan with the new Fab Five NBA Coach

Who are the players at the other schools on his list who are "on the fence" that he would be waiting to hear about? Most of us probably had not been too optimistic about Silvio's return, so that could have added some edge for him to lean elsewhere, Hope not. And I don't forsee any redshirts being possible to make room if we get to that point.

Good question. I have an educated guess that Memphis is pretty much not an option. They are fairly full, if not completely full.
Tech is in a rebuilding year and even though they may have plenty of room, I don't see him going there either. They have few returning with experience. He and his dad said they want him to go where he is surrounded by returning experience. Also, Tech doesn't have any returning players that are testing the waters. They are either gone or back.
I think it's safe to say that he is choosing KU. I don't think Dotson is an issue. IF you read what he and his dad have said that Dotson would actually be a big plus for him coming to KU. I think SDS's decision is also a huge plus. All these players are only going to benefit Hampton. Grimes is the X factor and he is gone. Hampton is in Crimson and Blue...RCJHGOKU.

I'm guessing that Dedric is 100% lost, but sadly he is only selected in about 1/2 of the mock drafts. It would be sad for him to go undrafted. He could improve his chances so much by coming back, but I don't see that happening.

He has nothing to prove in coming back. He isn't going to get more athletic and that is his biggest NBA shortcoming

Grimes could really use another year at KU, but I think his pride will not allow that to happen. He didn't get the love he expected from the KU fan base. The NBA will not want him, with the Freshman year he had. So, he is probably going into the European circuit.