Is former Jayhawk Marcus Morris headed to the Knicks? 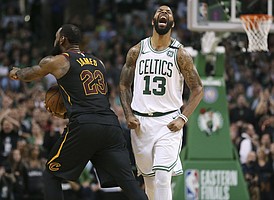 Boston Celtics forward Marcus Morris, right, and Cleveland Cavaliers forward LeBron James react after James didn't cross the half court line in the allotted time during the second half in Game 7 of the NBA basketball Eastern Conference finals, Sunday, May 27, 2018, in Boston. (AP Photo/Elise Amendola)

Kyrie Irving and Kevin Durant may have not wanted any part of playing for the New York Knicks. But, believe it or not, there are players out there who are interested in doing just that.

And one of them is a former Kansas Jayhawk.

A few days after agreeing to a two-year, $20 million free agent contract with the San Antonio Spurs, reports surfaced that forward Marcus Morris may have changed his mind and was interested in heading to the Big Apple.

A New York Post report cites sources as saying the Knicks were wildly impressed with Morris’ 2018-19 season with the Boston Celtics, which included averages of 13.9 points and 6.1 rebounds per game to go along with 37.5% shooting from 3-point range.

All three numbers are higher than Morris’ career averages of 11.5 points, 4.6 rebounds and 36% 3-point shooting, and even Morris’ free throw percentage with the Celtics (84.4%) was significantly better than his career mark of 74.7%.

Morris, who will be 30 at the start of the 2019-20 NBA season, is entering his ninth year in the league and has played for four different teams during that time.

According to the Post’s report, the Knicks have offered Morris a one-year deal worth $14.8 million, which not only may be enticing for the per-year salary but also for chance for Morris and his agent, Rich Paul, to get into the New York market.

Morris’ change of heart, however, has ruffled a few feathers in the NBA, with the report making note of the fact that many agents have quietly voiced their displeasure about Morris’ move, both because of what it does to the Spurs today and what it could mean for the future of free agency in the league.

Beyond that, Morris also is putting himself at risk for future negotiations once he becomes a free agent again, which could be as soon as 2020 if he joins the Knicks.

It remains to be seen how it all plays out, but a Thursday report from Ian Begley, of SNY.tv, indicated that the Knicks now believe that obtaining Morris is “a likely scenario.”

Add this to the list of interesting moments regarding the Morris twins. There’s never a dull moment with those two.

Speaking of Morris’ twin, earlier this summer Markieff Morris agreed to a free agent deal with the Detroit Pistons, his fourth team in nine years.

Playing for the Knicks is like the company Dilbert works at - it's a resume stain you will never be able to get rid of. DON'T DO IT, MARCUS!!!!

I don't care for players who change their mind after already agreeing to a contract. Poor execution by Marcus and his agent!

Thomas Robinson and Jeff Withey are featured in this article about former NBA players trying to return to the league by playing at Summer League. Interesting comment about how T-Rob has tried to change his attitude and prep after being bluntly told by a GM that his basketball IQ was crap