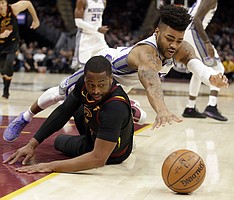 Two years ago, Kansas point guard Frank Mason III was on top of the basketball world, sitting as the reigning college player of the year and just a couple of weeks removed from being drafted into the NBA with the No. 34 overall pick by the Sacramento Kings.

Today, Mason, who has been dealing with a nagging right hip injury, is fighting to find his footing with the Kings’ summer league squad and is in search of a new NBA team to play for during the 2019-20 season after recently being waived by the team that drafted him.

Mason has not appeared in any of the Kings' three Summer League games thus far. Sacramento will look to improve to 3-1 in the Las Vegas league with a 9 p.m. clash with the Clippers tonight.

While big time college hoops fans and Kansas fans who have followed Mason’s career closely — in Lawrence and beyond — are probably not surprised by Mason's current situation, the more casual basketball fan may be a little confused.

How is it that one year a guy can be named the best player in all of college basketball and two years later that same guy can find himself battling to be a role player at the next level?

It’s actually much more common than the college honor might suggest and, in many ways, mirrors the trials and tribulations of many college football Heisman Trophy winners.

Several Heisman winners have gone on to have less-than-stellar pro careers, and that certainly also has been the case with a handful of college basketball’s best over the years, as well.

It’s different, of course, in that nearly half of all Heisman Trophy winners — 34 of 83 — have been quarterbacks, many of whom were drafted to be franchise-saving players, while college basketball’s players of the year have come from all positions and often been drafted onto teams that already had solid and established players at the position.

But you’d still think that if a player was good enough to be the cream of the crop in college basketball — as Mason so clearly was during his senior season at Kansas — he would be able to not only stick with an NBA team but carve out a pretty nice pro career, as well.

Maybe Mason still will. I certainly wouldn’t bet against him. But things are tough these days, with pro prospects getting younger every year and NBA teams constantly searching for ways to upgrade their rosters with youth and talent.

Through two seasons with Sacramento, Mason holds career averages of 6.8 points, 2.6 assists and 1.9 rebounds in 15.8 minutes per game over 90 career appearances.

So where does that leave Mason in comparison to the other Naismith Award winners during the Bill Self era at Kansas?

Because he’s still so young and still has time to build his career, Mason seems to be in a better shape today than a lot of these guys.

The biggest difference? All but three of the 16 Naismith winners since Self arrived at Kansas went on to become lottery picks in the NBA Draft. Only Mason, Jalen Brunson and Jameer Nelson were picked outside of the lottery.

So in that regard, when weighing expectations versus production, Mason is ahead of the game and may only be able to help himself from this point on.

Here’s a quick look at the pro careers — some finished and others ongoing — of the 15 other Naismith Award winners since 2003-04:

The reigning Naismith Award winner and No. 1 pick in last month’s draft, Williamson has all eyes on him along with the potential to be a franchise-changing player.

Played in 73 games for the Dallas Mavericks during his rookie season, starting 38 and finishing the season with per-game averages of 9.3 points, 3.2 assists and 22 minutes. Brunson was drafted by Dallas with the No. 33 overall pick.

During his first three seasons in the league, the former Oklahoma star has appeared in 244 games and made 149 starts with two franchises, Sacramento and New Orleans. Hield owns NBA averages of 14 points, 4 rebounds and 2 assists per game while playing 27 minutes per night. Hield was a lottery pick of New Orleans in the 2016 NBA Draft, picked No. 6 overall.

Although he played in 81 games as a rookie, Kaminsky’s first four seasons have been full of inconsistency. Drafted with the No. 9 overall pick in the 2015 NBA Draft, Kaminsky has made 23 starts in 282 career games with Charlotte, holding a career scoring average of 9.8 points in 22 minutes per game.

Another former lottery pick (No. 11 overall in the 2014 NBA Draft), McDermott has played for five teams in his five pro seasons and owns career averages of 7.8 points and 2.1 rebounds in 341 career games, 14 of them starts.

Drafted with the No. 9 overall pick in the 2013 NBA Draft, Burke has played in 361 career games with four different franchises and owns career marks of 10.9 points and 3.6 assists in 24 minutes per game.

One of two bona fide NBA superstars on this list, the newest Los Angeles Laker who has been a fixture on all-defensive teams and at the NBA All-Star Game owns career averages of 24 points, 8 rebounds, 2 assists and 2 blocks per game while playing 35 minutes a night. Davis was the No. 1 overall pick in the 2012 NBA Draft.

Drafted in the lottery with the No. 10 overall pick in the 2011 NBA Draft, Jimmer played in 235 games during his first five NBA seasons (including just six during the 2015-16 season) before heading overseas for the 2016-17 and 2017-18 seasons. Back in the NBA a season ago, Fredette played in just six games for Phoenix, bringing his career totals to 7 starts in 241 appearances while averaging 6 points per game on 41% shooting.

Solid but not spectacular, Turner has appeared in 686 games and made 295 starts during his NBA career, averaging 10 points and 5 rebound per game. Turner was drafted with the No. 2 overall pick in the 2010 NBA Draft.

The next best pro on this list behind Davis and Kevin Durant, the former OU star has racked up career averages of 22 points, 9 rebounds and 4.5 assists while starting all 604 games of his NBA career with the Los Angeles Clippers and Detroit Pistons.

One of the baddest dudes on the planet, Durant has started all 849 games in which he has played and owns career averages of 27 points, 7 rebounds and 4 assists per game with Seattle/Oklahoma City and Golden State. He also has two world championships and two NBA Finals MVP awards and just signed a monster deal with Brooklyn despite injuring his Achille’s tendon during this year’s playoffs. Durant famously was drafted No. 2 overall — behind Greg Oden — in the 2007 NBA Draft.

Still going strong after 836 games in 13 NBA seasons, Redick owns career averages of 13 points per game on 41% shooting from 3-point range while playing with four different franchises and recently signing to play for a fifth in Year 14. The former Duke sharp-shooter was drafted as the No. 11 overall pick in the 2006 NBA Draft.

Although his contributions in the NBA have slowed to a crawl during the past three seasons, Bogut’s still out there and has racked up 661 career starts in 706 games while averaging 10 points, 9 rebounds and 2 assists in 28 minutes per game. Like Davis in 2012, Bogut was the No. 1 overall pick in the 2005 NBA Draft.

Parting thought: If you’re confused about why I included the “Heisman comp” for each player, join the club. But, hey, it’s July and it seemed like a fun thing to do. Beyond that, I really do think the pro success of Heisman winners and college basketball's MVPs is eerily similar.

I liked the heisman comp but wish you would have added a note about what they had/hadn’t done.

Similarities between the 3 is that they are all smaller PGs.

While I mean no disrespect to Frank or what he accomplished for KU that season or in general, there is an argument that he wasn’t the cream of the crop, which is why he was drafted 34th, though he certainly did have great stats.

Matt, I really like the unique views you take of current Jayhawks and Jayhawk Alumni [ I hate the term "former Jayhawk"..once a Hawk, always a Hawk in my book! ]. Anyway, a question from far, far out of left field.......is Mitch Lightfoot related in any way to Gordon Lightfoot, the ballad singer from the 70's? Just asking.... thanks.

The thing is, neither the Heisman Trophy not the National Player of the Year Award has anything to do with the players's future pro potential. It is simply given to whoever a handful of media and/or coaches believe was the best D-I college player in a specific season. And more often that not, the awad goes to the highest profile player on the best, or one of the best, teams. That's why we never see a NPOY or Heisman Trophy winner from a smaller school, even though the small school player may have far more potential as a pro.

Frank was a 2nd rd draft pick, which suggests that NBA talent evaluators didn't see him as a surefire NBA pro. He's way undersized at 5'10" and his one real skill that people expected to translate to the NBA was his 3-point shooting. But he shot 22% from behind the arc last season. So no one should be surprised that the Kings waived him. Hopefully he finds a team to sign him, but, as I've said in other comments, he's probably better off trying to build a career overseas

While we're dreaming up stuff in July... What if, you had a franchise in the NBA and you told your scouts to go out and get guys with skills, who can play the game. Height, wing span and leaping ability is secondary and used as tie breakers but I want guys who can shoot, handle, play defense, rebound and/or pass with great skill at all positions.

While I doubt you'd win championships, would you be in the playoffs every year with say, the guys on this list less the two superstars?