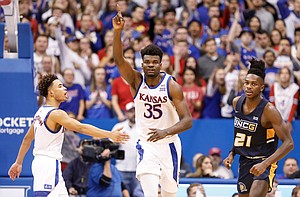 Kansas center Udoka Azubuike (35) signals the ball going the Jayhawks' way as he and Kansas guard Devon Dotson (1) celebrate a UNC-Greensboro turnover during the second half, Friday, Nov. 8, 2019 at Allen Fieldhouse. At right is UNC-Greensboro forward James Dickey (21). by Nick Krug

In the moments following KU’s Maui Invitational title game victory over Dayton, Kansas coach Bill Self mentioned that the 1-2 punch of Devon Dotson and Udoka Azubuike may be the best the program has had in a while.

Whether that’s true or not is largely a matter of opinion and also depends on your definition of a 1-2 punch.

For instance, Devonte’ Graham and Frank Mason were a heck of a 1-2 punch for Kansas during the 2016-17 season. The same was true for Graham and Svi Mykhailiuk the following season.

But all four of those players were guards.

So if we are to assume that by 1-2 punch, Self was referencing one lead guard and one big man, the case for Dotson and Azubuike becomes a little stronger. Even if it is still in its infant stages.

Remember, these guys have played a total of just 16 games together in their lives. And in those 16 outings Azubuike and Dotson have combined to top 35 points just three times, including last week’s Maui Invitational title game when they went for 60 points — the most by a KU duo since Terry Brown and Alonzo Jamison combined for 65 points in a 1991 win over NC State.

So there’s little doubt that, for that particular game, Dotson and Azubuike were as dynamic a 1-2, big-little punch as the Jayhawks have had in years.

“When he has it going and the attention is on him, that opens it up for other players,” Dotson said of Azubuike. “So it’s just kind of a 1-2 punch. We read the defense, take what’s given to us. We know that if we can get the ball down low, we’re going to go there every time.”

Given their roles, experience and importance on this season’s team, it’s fair to expect that more games like that are on the way.

But they’re not here yet. And because of that, the two current Jayhawks aren’t quite in the upper echelon of Self’s best 1-2 punches just yet.

They’re close, though. And there’s still a lot of time remaining in the 2019-20 season for them to make an even bigger impact.

Here’s a look back at the best guard-big man 1-2 punches of the Self era in terms of their offensive production and usage.

Surrounded by players who fit their roles and helped this Kansas team make a run all the way to the national title game, there was never any disputing that Taylor and Robinson were the two Jayhawks who stirred the drink.

Both shot over 50% from the floor, and they combined to score 46.7% of this team’s total points by playing the most minutes of any guard-big man 1-2 punch in the Self era at 33%.

The only two players left with any real experience from the 2008 title team, Collins and Aldrich were very much Batman and Robin during the 2008-09 season.

Like Taylor and Robinson, they were the leading scorers on this team, combining to produce 44.2% of KU’s offense while playing 32.3% of the team’s minutes.

The duo led the Jayhawks in scoring and shot over 50% from the floor while making the adjustment from Roy Williams’ run-and-gun style to Self’s high-low offense.

Their numbers in Year 1 under Self were only slightly better than their numbers as seniors, when they again combined to lead the Jayhawks in scoring, producing 41.4% of the team’s total offense in 28.8% of the available minutes.

While Langford’s scoring average dipped a point from Year 1 to Year 2, Simien’s went up by 2.5 points per game, pushing him above the 20-point mark and earning him All-American honors.

This might surprise some of you, but it probably shouldn’t. If you think back to last year’s team, Dotson and Lawson were the two players the Jayhawks could not take off the floor.

They both played more than 1,100 minutes — combining for 32.2% of the team’s playing time — and they were responsible for 41.9% of the team’s scoring, finishing 1-2 in points per game during their first seasons as Jayhawks.

Of all of the duos on this list, this (not surprisingly) is the one the Dotson-Azubuike duo most closely resembles. That’s partly because it includes one of the same players and partly because of the offensive sets the Jayhawks currently utilize, with Dotson as the primary ball handler and Lawson as a player who was virtually unstoppable down low.

Through seven games, Azubuike and Dotson have been KU’s top two scorers, scoring 42% of KU’s points in 30.5% of the minutes.

Although McLemore was not a point guard and Withey more of a center than a power forward, this duo stepped right in for Taylor and Robinson the following season and put up strong numbers.

In finishing as the Jayhawks’ top two scorers, McLemore and Withey combined to score 39.4% of the Jayhawks’ points while playing 31% of available minutes. Both shot over 50% from the floor and, like Taylor and Robinson, they provided Kansas with weapons on the perimeter and in the paint, which made it tough for opponents to set up their defensive game plans.

Two seasons before he became the unanimous national player of the year, Mason was a key part of the KU offense, teaming with Ellis to lead the Jayhawks to the Elite Eight and another strong season.

This duo combined to score 36.6% of KU’s points while playing 31.5% of the available minutes.

Although this team was known for its deadly 3-point shooting and four-around-one offensive attack, Azubuike’s presence cannot be overlooked.

Although he was injured late in the season, he still played in 36 of KU’s 39 games and averaged 13 points and 7 rebounds per game while shooting 77% from the floor.

That kind of production is going to make any point guard look good. And Graham certainly knew what to do with it. Bumping his assists up by more than three per game from his junior season, more than a third of his 282 assists directly set up Azubuike buckets, many of them lobs that energized the KU lineup and demoralized opponents.

Together, these two combined to score 36% of KU’s points in 29.7% of the minutes, numbers that both were slightly lower than they could have been simply because the Jayhawks had weapons like Malik Newman, Svi Mykhailiuk and Lagerald Vick doing plenty of scoring to help KU’s cause.

Had Graham and Azubuike played on last season’s team or this one, they could have pushed for one of the top three spots on this list, which is why Self and others believe Dotson and Azubuike can do the same in time.

The follow-up to their stellar 2008-09 season was not quite as impressive, simply because the Jayhawks did not need it to be.

With reinforcements named Xavier Henry, Marcus and Markieff Morris and Tyshawn Taylor joining the roster, Collins and Aldrich had more help this season than they did the year before.

Collins still ran the show and was the heartbeat of the team. And Aldrich, who wound up becoming lottery pick, focused more of his efforts in becoming a defensive enforcer instead of producing on the offensive end.

One might think that the No. 1 and No. 3 picks in the NBA draft would have been much higher on this list and a much nastier combination.

But injuries and the fact that both were freshmen playing in their only season of college basketball contributed mightily to what Wiggins and Embiid could do.

This was the hardest one to decipher because the 2008 title team was so balanced. You easily could look at the production of Brandon Rush and Darnell Jackson as this team’s 1-2 guard-big man punch, but because Arthur and Chalmers were both in the top three in scoring I went with them.

They lost to a bad Duke team, almost lost to an unbanked mid-major and have won nothing - though I did see Dok complete two trips up the floor without calling for oxygen. That’s got to put them in the top 500 KU duos of all time.

After what they did to Michigan St, yeah that's a real terrible Duke team

and how do you unbank a mid-major team?

Right up there with remembering that they have only played 16 games together.

I would call them dynamic duo 1-2 punch IF Dotson facilitates Dok like Graham did. As Matt said, they only played 16 games, and most of Dotson's assists to Dok are not even near as good as Graham's. Things will change from now on. Let's hope Dotson continues to share the ball with Dok while keep driving and scoring.

It's great to have a 1- 2 punch, but as Matt stated in punch line #10, look what a 1-2-3 punch can do for you. How many of those 1-2 punch combos have won national championships? How many times have we seen a team neutralize one of those guys and there isn't anyone to step up and change the game. Usually it's the big man, as has already been done to Dok, and to Perry Ellis in recent years. As much as I like the 1-2 punch of Dotson and Dok, I'm holding out for that third player to be the 1-2-3 punch that wins big time games. Maybe it's Mac, Agbaji, Moss, Garrett, who knows, but one more guy needs to step up.

I still think shooting is going to be the Achilles heel of this team. At some point in time they are going to run into a good team that is on fire from the 3pt line and throwing lobs to Dok ain't going to cut it, especially if the other team doubles and hacks Dok. This team's strengths are Dok in the middle and 2 or 3 guards who drive the ball...all a defense has to do is pack the lane and KU loses its advantage since it doesn't have any other tools. Combine that with a Coach that believes the 3pt shot is "fools gold." Smaller lineups and outside shooting are fast becoming the norm in basketball in all levels...High School through NBA.

I think coach's stance on 3's being "fools gold" has changed since then. In fact if I remember correctly he may have pulled back on that statement a couple years ago.

Its a bit of a double edged sword. As much as its great they are doing so well, a bit more balance on the team would help insulate us should Devon or Dok be out for a game. My dream has always been to have 5 players averaging double figures. Probably has never happened.

That's where player like Marcus becoming more vital to the team. He has developed to be a scorer. And I hear you, Barry. You dream of a team where everyone is a slasher, a scorer, can dribble drive. That ain't gonna happen with hi-low, but it might happen with a hybrid hi-low + dribble drive that we saw earlier by trio Dok, Dot, Marcus. We just have to be a bit patient: Moss needs to hit his 3s consistently, Enaruna has got to use his length to score easily, Braun has no fear and has to operate that way more, David n Souz needs to model Dok, Ochai will pick up. It might happen. Soon.