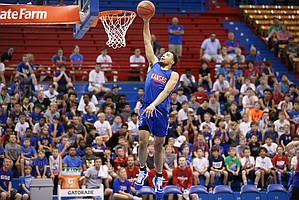 Kansas guard Devon Dotson cruises in for a layup during a scrimmage on Tuesday, June 11, 2019 at Allen Fieldhouse. by Nick Krug

Sure, the opportunity was greater than what most get, and, yeah, the numbers were good not great.

But there’s no disputing that Kansas point guard Devon Dotson, now on the brink of his second season with the program, had a solid freshman season for the Jayhawks in 2018-19.

Earlier this summer, I took at look at just how much of a workhorse season Dotson had as a freshman and it sure seems like the experiences he gained then will help him immensely during the 2019-20 season, as well.

That knowledge accompanied by some serious offseason work has Dotson poised for an all-Big 12 season and a major jump from what we saw during his freshman year.

We already know he has talent. Speed, toughness, the ability to finish and ball handling are all among his biggest strengths.

But a short video that Dotson recently Tweeted out shows we might not have seen anything yet.

I know it’s a 1-minute video and it’s designed to highlight his best moments of recent workouts, but it’s pretty darn impressive nonetheless.

The thing that jumps out to me here is just how strong he looks. Strong physically. Strong with the ball. Strong and explosive at the rim.

Check it out for yourself (if you find foul language in rap lyrics offensive, watch it with the sound turned down) and see what stands out to you.

Whether it’s the same as what I see or something different, I think we can agree on the fact that Dotson is in for a monster year.

Only a matter of time ...🀄️ ✍🏽 pic.twitter.com/EVpoJSpCkx

awesome! Devon's experience is going to be priceless this season!