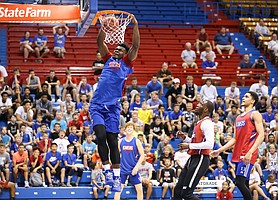 Kansas center Udoka Azubuike comes in for a dunk past former Kansas guard Tyshawn Taylor and current forward Tristan Enaruna during a scrimmage on Tuesday, June 18, 2019 at Allen Fieldhouse. by Nick Krug

Earlier this week, we took a look at a few “He Will, He Won’t, He Might” predictions for the player who figures to make the Kansas basketball offense go this season — point guard Devon Dotson.

Now, let’s shift gears — and uniform sizes — to the player on KU’s 2019-20 roster that figures to anchor everything the Jayhawks want to do this season.

From his spot on the block as a force who draws double and triple teams most nights and dominates players and teams who dare guard him straight up, to clogging the paint and protecting the rim on defense, Udoka Azubuike arguably is as important to his team as any player in the country.

After missing most of the 2018-19 season with yet another fluke injury, the 7-footer is back at Kansas for a senior season that no one expected him to be around for and determined to make the most of it.

The goal is obvious and it has as much to do with being on the court with a chance to contribute as it does points, rebounds, blocks or dunks.

He Will: Play a full season for the first time in his KU career

Even during the 2017-18 season, when he played a huge role in leading the Jayhawks to the Final Four, Azubuike missed time because of injury.

His MCL sprain just before the start of the Big 12 tournament in 2018 forced him to miss three games there and nearly all of a fourth in the opening round of the NCAA Tournament and similar wrist injuries during his freshman and junior seasons caused him to miss all but a handful of games those years.

Enough is enough, right? I know there’s no science behind the claim that Azubuike will play a full season for the first time in his Kansas career, but it sure seems like he’s due to catch a good break in the injury department, so we’ll go with it.

Mark it down. No missed games. No major injuries. Nothing but Azubuike in the starting lineup from start to finish for the 2019-20 season, however long that may last.

He Won’t: Average more than 25 minutes per game

Partly to keep his conditioning issues in check and also because of KU’s depth behind him, I foresee a season in which Azubuike goes as hard as he can while he’s out there and gets the necessary rest on a per-game basis to keep that kind of production consistent.

In years past, KU coach Bill Self has talked about Azubuike’s presence on the court being a huge component of KU’s chances to not only win games but also control them. So the temptation to keep him out there as much as possible certainly could be there.

But Azubuike is a different player when saddled with foul trouble. And even though his foul issues might not hurt Kansas as much this season as they did in the past, they are still likely to cut into his individual production.

Playing Azubuike around 25 minutes a game (which, by the way, would be better than his career mark of 21 mpg and better still than his best season at KU when he averaged 23.6 mpg in 2017-18) limits the impact that any of his five fouls can have and also would help him stay fresh and hungry for the minutes he is on the floor.

He Might: Shoot 50 percent or better from the FT line

All of the injuries, his new physique and the excitement surrounding his return have taken a little of the focus off of Azubuike’s issues at the free throw line.

That’s what not shooting (and missing) free throws in front of thousands of people can do for a guy.

But make no mistake about it, we still have to wonder if Azubuike can improve enough at the free throw line to stay on the floor late in games if Self and company need him out there. The guess here is he just might.

Remember, heading into last season Self said he thought Azubuike could reach as high as 60-65% from the line because of the time he had put into fixing his free throw form and working on different routines that made him more comfortable at the line.

Because of the injury, he never got a chance to show whether Self was right or wrong, although the early returns weren’t good. In the nine games he played in last season, Azubuike made just 11 of 32 from the free throw line, good for a 34.4% clip.

That brought his career mark below 40% (39.4) and certainly did nothing to suggest he was heading in the right direction.

So the theory here is simple: There’s really nowhere to go but up. And with this likely being Azubuike’s last run at KU and him knowing that he actually has some big man help on the bench this season, that could be the right recipe for a more-relaxed, better-free-throw-shooting Azubuike during the 2019-20 season.

Self has said that Dok’s foul trouble correlated strongly with extending his minutes when he got tired. Improved conditioning along with more support from Silvio, David, and Mitch should reduce both his minutes and fouls. IIRC all the others are good FT shooters and very capable so it is even less important that he play late.

Most importantly, good conditioning should mean he won't be as susceptible to injuring himself.

I would hope that he improves his free throw shooting. since being injured I would think that he would have been shooting 500 free throws a day.

And, I would hope, with improved conditioning, his shot block average should almost double.

Ok we hope he has a great season. But maybe my opinions are questionable but here goes.
He throws the ball toward the goal by free throws. He needs to shoot the ball. He definitely needs to not clog the lanes for guard driving. He also needs to set a post so a pass to him won't be intercepted. Some bounce passes for example. I hope McCormack gets playing time as that means Udoka can not be wore out while playing.

Brian - The extra FT practice applied the first time around but I believe the latest injury was to his right wrist so not as much this time. IMO, tho the % didn’t rise to start last year, there was at least some improvements in his form. I think Coach made the comment early last year that he needed to see some success which breeds confidence and more success.

I for one expect huge things. He probably will lead nation in field goal percentage ... dunk very high percentage.. clog the lane I am fine . No team in nation can handle his size to maturity .. he will be unstoppable to goal .. turn stuff it. Great year for the big man and he totally deserves it !