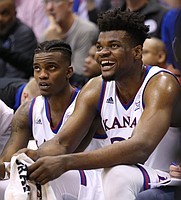 Kansas center Udoka Azubuike, right, has a laugh with Kansas guard Lagerald Vick during the second half, Saturday, Jan. 27, 2018 at Allen Fieldhouse. by Nick Krug

Monday's 2-of-5 free throw showing, which included two makes in a row late in the game, might have removed Kansas big man Udoka Azubuike from the free throw dog house.

But it does not mean Azubuike's free throw woes are fixed for good.

Kansas coach Bill Self was asked about every detail of Azubuike's free throw fix during his Hawk Talk radio show on Wednesday night, and the veteran KU coach who personally worked with Azubuike to help reset his form following an 0-of-6 performance at Oklahoma that, at least in part, contributed to KU's loss there, again explained that improving Azubuike's free throw shooting was a work still in progress.

“I don't think there's an overnight formula that, all of a sudden, he's going to go from a 40 percent to an 80 percent free throw shooter,” Self explained of Azubuike, who currently is shooting .377 at the line. “But hopefully he can get a little bit more consistent and, most importantly, get some confidence there.”

Consistency has been the biggest key in this whole experiment, which is just over a week old now. That's not to say that Azubuike and his coaches did not recognize and address his free throw woes prior to that OU loss. They did. But it was not until the player who already was known as a poor free throw shooter came up short on the biggest and brightest stage that inspired real change.

“He's trying and he's doing better,” Self said. “It's not going to be fixed. I mean, it's going to take months to get it where it's a habit and he can repeat it. But he's doing a lot better, he's trying hard and he's shooting a lot of them and he's practicing the right way, so he'll continue to see more success.”

Self again on Wednesday said he was the one specifically working with Azubuike on his new form, which looks markedly better than what he showed at Oklahoma and features a tighter, more compact approach rather than arms and elbows pointing every which way.

“This was me,” Self said. “So I'll take the blame if it doesn't go well and he deserves all the credit if it does. One thing in shooting, you can't hear more than one voice and everybody's got their own idea on how he should do it. He needs to not listen to anybody. And I don't think he is. He's been pretty committed to doing the same things that we've been working on.”

Asked if he had received any tips or advice from inside the coaching world on how to help Azubuike, Self said simply, “No. No. Coaches don't do that.”

“We've all been taught how to shoot a certain way and there are certain things that some people think are more important than others and I certainly respect that,” he continued. “But the way that (one coach teaches) it doesn't necessarily fit everybody. So you have to make adjustments based on who the individuals are. … You don't change something that's been practiced a certain way for 12 years in a weekend or whatever. I think his routine is better and more consistent and he's going to be fine.”

We all make mistakes so best to learn from them. Keeping him in the game against OU was a huge factor in its outcome. It appears he only shoots goals very close to the rim. Until he gains experience shooting away from the rim his success will be limited. The odds that he will go pro after this season aren't very high. Hack a Doke might get popular

Every time Dok came out of the OU game, OU put in Manel or whatever his name was and he killed us. But he couldn't handle DOK. If I recall, in one article that's why Self said he left him in, to keep Manel from coming in and icing the game and also hoping Dok would get a couple of those free throws. In this case the gamble didn't work. So, had he taken Dok out and Manel came in and killed us we'd all be criticizing the move to remove Dok.

Shooting them one-handed is the best drill. Your elbow can't splay out on a one-handed shot--it has to stay firmly underneath the ball.