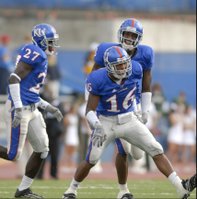 Former Jayhawks Chris Harris (16) and Aqib Talib (3) will be reunited in Denver in 2014 after the Broncos signed Talib on the opening day of free agency Tuesday. by Matt Tait

There's a heck of a reunion taking place in the Mile High City and, believe it or not, at the center of it are a couple of former Kansas University football players.

When news broke Tuesday night that the Denver Broncos had reached an agreement with free-agent cornerback Aqib Talib on a six-year, $57-million deal, my mind immediately shifted to the 2008 Orange Bowl, where Talib lined up at one corner position and true freshman Chris Harris lined up at the other.

Together, Harris and Talib helped lead the Jayhawks to an Orange Bowl championship that capped off a magical 12-1 season. Harris recorded an interception and four tackles in that game and Talib, never one to be outdone, made the most memorable play of the game, a pick-six interception in the first quarter that, after the game, led to these four famous words: “I felt like Deion!”

With Talib joining Harris in the Broncos secondary, the move qualifies as an instant upgrade at one of the biggest areas of weakness for the team that represented the AFC in last year's Super Bowl.

According to a report from the Denver Post's Mike Klis, in the 6-foot-1, 205-pound Talib, the Broncos have secured the kind of big, physical cornerback that Broncos general manager John Elway has coveted since he took control of the team's football operations three years ago.

Talib, 28, snagged four interceptions and 14 pass break-ups during the 2013 season with the New England Patriots, who often lined him up on the opponent's best wide receiver.

While all of that — the age, the talent, the size, the swagger — is great news for the Broncos' defense, I can't help but think about how pumped Harris must be about reuniting with his old KU teammate. Because of the timing of Harris' one season with Talib in Lawrence — Talib was a junior and Harris just a freshman — the relationship between the two always felt like one of big brother, little brother. Harris had great admiration for Talib's skills and always appreciated how he helped him along as a true freshman playing big-time college football for the first time.

Now that both are starters in the NFL, it doesn't to figure to be that way in Denver, but, in Harris, Talib will have a friendly face who can help him break into the Broncos' culture and show him the ropes of how to play for head coach John Fox, defensive coordinator Jack Del Rio and, perhaps most importantly, a team led by future Hall of Fame quarterback Peyton Manning.

The early days of Talib's career were marred by off-the-field incidents and immaturity but his talent and ability were never questioned. After leaving Tampa Bay midway through the 2012 season, Talib latched on in New England, where Patriots coach Bill Belichick helped him clean up his image and focus on making plays and helping the team win. Although Belichick and Manning will never be mistaken for one another, being under Manning's eye figures to help keep Talib on the straight and narrow the way playing for Belichick did during the past season and a half.

Of course, being around an old running mate like Harris, who is wildly respected in the Denver community and arguably was the Broncos' most important player on defense last season, won't hurt either.

And, of course, having a pair of starters in the secondary of one of the preseason Super Bowl favorites, is nothing but good news for Kansas football. 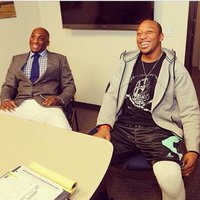 Denver cornerbacks Aqib Talib, left, and Chris Harris at Wednesday's introduction of Talib to the Denver media. by Matt Tait

Cool article, Tait! You must have loved this news. I immediately thought of your reaction.

Completely agree with Mr. Kelly above^^. The fact that Talib says North Dallas High School is an abomination and injustice to the football program that put him on the map and gave him a chance when UT and OU said no thanks. Denver's going to have a slew of primetime games next year. It sure wouldn't hurt recruiting to hear
'Kansas' back-to-back on Harris and Talib. Forget the fact that Talib actually attended Berkner High in Richardson, TX, not North Dallas High or whatever the hell he says. This drives me crazy.

Thanks, Tino. I've heard that people have reached out to Talib about his intro so hopefully that along with rejoining Chris Harris and Steven Johnson will inspire the guy to change his mind about it... Wouldn't hold your breath, but it's possible. Hope all's well, man!

Bronco's are really making it really hard on me this coming season. I've been a Chief's fan since the early '80's (basically when Joe Delaney was a rookie RB for the Chief's). What a rookie season Delaney had that season, and to leave this earth performing a heroic act as he did). What a TRUE hero Joe Delaney was.

But, I've always been a Peyton Manning Fan. Now, John Elway's went and added Aqib Talib with Chris Harris and Steven ''I'll Never Listen to the Doubters'' Johnson to the team. And, they have Montee Ball (from Timberland High here in St. Charles County, Missouri on the team as well). To many guys on the Bronco's roster for me to NOT pay attention to them. TOMAHAWK CHOP.

"And, of course, having a pair of starters in the secondary of one of the preseason Super Bowl favorites, is nothing but good news for Kansas football."

I know you're a Broncos fan, Matt, so I'm sure you're understandably psyched.
As a Chiefs fan who just saw his team get gutted and Denver upgrade their D, I'm less than psyched.

It's cool that they're on the same team, but it would be so much better if they were not on a division rival.

i imagine that might be a problem for the time being, but if more states follow Colorado and Washington in their legalization and medical marijuana efforts, I wouldn't be shocked if the NFL eliminates that from whatever banned substance list it is on some time in the future.

Forgive my ignorance, but isn't Chris Harris a free agent? So isn't there a possibility their reunion could be over before it even begins?

He's a FA, But they put a second round tender on him, so it sounds like they're a little interested in keeping him.

Chiefs could use a corner!

Amen. Gotta respect a legendary player. But the team is another story.

Yep. Another KC fan here, but will always tip my hat in respect to John Elway, what a competitor. Best KC/Denver game of all time was when Elway went against KC's Montana, and SuperJoe threw a 4th down pass to KC's #84 Willie Davis, who did a toe dance and stepped right around the TD cone in a perfectly timed play for the win. Classic.

Of course, I can never get the image of Joe Montana in the AFC Championship game in Buffalo, NY, after he got knocked to the ground, holding his head on the ground, slow to get up. The end of an era, right on that play. The Chiefs have never made it that far again.