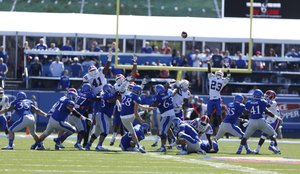 Kansas kicker Matthew Wyman watches his 52-yard field goal sail toward the uprights for a 13-10 win over Louisiana Tech during the on Saturday, Sept. 21, 2013 at Memorial Stadium. by Nick Krug

Lost in the craziness of Saturday's 52-yard game-winning field goal by KU sophomore Matthew Wyman and the wild celebration that followed it was an important aspect of the game that was just as critical to the win as Wyman's kick.

No, it wasn't junior tailback Tony Pierson's 29-yard catch that set up the field goal or the back-to-back passes that junior quarterback Jake Heaps put right on the money that covered the final 37 yards of the drive. Heck, it wasn't even senior running back James Sims going into beast mode and running like the James Sims of 2012 that kick-started the drive in the first place. All of those plays — each of which were huge — got the credit they deserved from the Jayhawks, the coaching staff, the media and even the fans following the victory.

The one that did not was one that rarely does — the snap and the hold.

Forget about the stakes for a minute. We all know what was on the line when KU coach Charlie Weis called timeout with 2 seconds left and sent the field goal team onto the field to try to win it. The situation itself obviously added pressure to everyone on the field, not just Wyman. And because of that, the kick would have been tough enough even from 20 yards closer.

But when you're talking about a 52-yarder, the margin for error on every aspect of the play shrinks dramatically. Had the snap not been perfect and the hold not impeccable, Wyman would have had a much tougher time becoming the hero. So give credit to long snapper Reilly Jeffers and holder Blake Jablonski for doing their jobs to perfection.

I'm sure there are those out there who would say that these guys shouldn't be celebrated just for doing their jobs and I understand that. But these are not professionals. They're still kids. Former walk-ons, no less. And they did their jobs in damn fine fashion and that led to something that KU has not had the chance to enjoy much of during the past four or five years.

I'll admit it. I barely even thought about these two guys during the few hours following the game. There were too many other guys to talk to and too many things to write about. Here's a quick recap: Jayhawks move to 2-1; Streak of 22 straight losses to FBS opponents is snapped; KU finishes non-conference schedule with winning record; Defense comes up huge again; Smiles return to team's postgame; Kansas victorious for just the 8th time since Mark Mangino left town. I could go on and on, but I think you get it.

The reason for bringing all of this up is to tell you that I had to go back and watch the film of the snap and hold myself just to see it. Obviously, since Wyman drilled the kick, I figured things went well, but I wanted to see how well. It was better than I expected.

It's clear that Jeffers was trying to be perfect with the snap because the ball did not set any speed records on its way back to Jablonski. But it was right on the money and it almost looked as if Jeffers snapped it in a way that made the snap and hold become one motion — I'm guessing that's what you want. Jablonski did not have to move left or right to catch the snap and it was soft enough that he had no trouble handling it. He simply leaned forward, put it down and then joined the celebration.

These plays get taken for granted so often and this was such a big moment for this KU team that I thought the efforts made by Jeffers and Jablonski were worthy of a little extra attention.

I realize the Jayhawks did not win the Big 12 with this kick and, based on what unfolded during the four quarters that came before it, it's quite evident this team still has a lot of work to do if it wants to reach the point of being consistently competitive in the conference. But having guys like this deliver in moments like that, to me, is just more proof of the discipline and attention to detail that are starting to become staples of the KU football program again.

At some point, just like they did on Saturday, those little details are going to start mattering more and more.

I read an interesting book awhile ago. "Confessions of a Long Snapper" It was about the long snapper for the Patriots during one of their Super Bowl years. The guy was cracking up under the pressure. Paced the sidelines during the Super Bowl praying the game wouldn't come down to a field goal (it did). Yep, the snapper and holder don't get much credit. But they can screw up it pretty easily.

The thing I keep coming back to is that last year this wouldn't even have been an option. KU would have tried a hail mary and then just taken its chances in OT. To even have the ability to attempt a kick like this shows marked improvement from last year. Now, let's get the offense into a rhythm and see what we can do!

Thank you Jeffers and Jablonski!! You've got a tough job. Do it well, and almost no one notices (except for Matt Tait -- thanks for bringing it to our attention!). Make a mistake, and everyone comes down on you. Not an easy job.

Saturday, you rocked it, and it was awesome. Thank you, and Rock Chalk!!!!

I didn't give one thought to this, and are you ever right. Great insight and dispensation of props, Matt. Jeffers and Jablonski were crucial and came through. I tip my hat as well. Thanks, guys.

Something to keep in mind about the La Tech game. They had just gotten embarrassed and were going on the road vs a Big 12 opponent, they were going to play very, very hard. That is no excuse but just saying that perhaps we got a better shot than some of their previous opponents. They weren't about to come up here and get blown out again.

Nobody notices when those guys do a good job. But we sure notice when they screw it up. Pretty much a thankless job but my hat is off to Jeffers and Jablonski for the great job they are doing, not just on that snap but on all of them. And thanks to Matt for pointing this out.

Long snapper is one of those positions on the field where you don't want people to know your name because they only time your name gets mentioned is when you screw up. Long snapper is definitely one of the most underrated and taken for granted positions there is in sports because you may only be on the field for about ten plays, but screw one up and you just lost your team a game.

I too never gave a thought to a holder's role until I heard about a former Lawrence High athlete who supposedly was as good at the job as anyone ever has been. He's now coaching baseball at Wiley College in Marshall, Tex. He held for the Lions in about 1994. His name: Ryan Goodwin.

I have heard of Ryan Goodwin too (Goody!). Some have said that he could be in the NFL right now if he didn't love baseball so much to pursue coaching. I think we need to get him out there as a holder to see if he still has it!

Thanks for the shout out Tom. Between you and Matt, it's about time quality holders get the pub they deserve.

Looks like Jablonski has been watching some Ace Ventura. Laces out, Jablonski! Great job!

For what it's worth...Rice lost to Houston!