What caught my eye at Wednesday's practice: Sept. 19 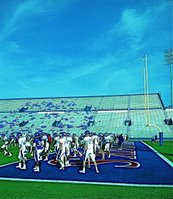 The Jayhawks practiced inside Memorial Stadium on Wednesday, as preparations continued for this weekend's Northern Illinois game in DeKalb, Ill. by Matt Tait

The Jayhawks practiced inside Memorial Stadium today and, during the time I was there, I watched junior running back James Sims pretty closely.

Here’s what I saw:

• Lots of energy and excitement

• And he looked very shifty and much quicker than I remember. Part of that could have been the nature of the drills they were doing, but even during the basic drills, it was obvious that he’s carrying a fewer pounds than before and seems to be a different back.

With that said, I’m expecting that we’ll see a lot of the same things from Sims. His vision was always above average and his nature is to take what’s given and not try to be too flashy. That will bode well for this team and his place on it.

A lot of people are curious about what Sims will do this weekend. I’m right there with you. My best guess is that he’ll get around 12 carries and he’ll make the most of each one.

Running backs coach Reggie Mitchell said Tuesday that Sims is faster and that his new-found speed was not just benefiting him on breakaways but also in getting to the holes quicker and making guys miss.

It’s certainly going to be fun to watch, as Sims is one of the most pleasant guys I’ve ever covered and deserves to bounce back from his mistake in a positive way.

Here’s a quick look at what else caught my eye at today’s practice:

• Since I watched Sims for a while, I also caught a good look at what the running backs were up to. Most of it was normal stuff, but I did notice an emphasis on catching passes. And I’m not just talking about the nice, easy-to-snag lob passes that QBs throw on screens. Charlie Weis Jr. operated as the quarterback for the drill and he was absolutely zipping the ball at these guys from less than 10 yards away. Mostly catches. So that was a good sign. I wouldn’t read too much into that being a part of the gameplan, though. I think it’ll be in there, but I don’t think it’s their secret weapon or anything like that. If it were, there’s no way they would’ve worked on it while we were there.

• Offensive lineman Sean Connolly was the only guy on the exercise bike today and even he spent a little bit of time off of it. Bad news for him, though. When he wasn’t riding the bike, he was walking the steps at Memorial Stadium, with his hands tucked behind his back. Try it. It’s harder than it sounds, especially at his size and in pads and a helmet.

• Finally, the Coach Weis song of the day was “I Believe” by Bon Jovi.... No comment.

A game of inches. Having Sims back could be bigger than we know.

Sims back is huge. He is a better blocker than Pierson and can also catch out of the backfield. Although Pierson showed some flashes last week in the receiving arena he has trouble feeling out a leak out option for the quaterback, maybe that's why he was going downfield. Sims possesses the leak out talent. So I think we'll see him on passing downs as well, maybe picking up a screen or a broken leak out catch and run.

I'd also like to see Sims and Pierson out of the shotgun next to Crist. . . maybe Pierson in motion to the slot.

Let's not forget he runs pretty mean too.

Maybe they should try another song genre. It's all Bruce and Bon, why not Barry (Manilow), that is, play better or we play Barry for your efforts.

I like some of his music, but it's not very aggressive, with the exception of Copacabana. Yay.

Matt ..read my post in the Change of Pace comments..its near the end ...Oh by the way...you are doing a heckuva job .and I read your stuff as often as I can...very impressive
P

i like the slight jab at Gill at the end. lol

I like Sims and Turzilli getting in the game more. I think our offense might look a little different this week.

Sims better be improved if he wants playing time because that Cox kid is better than the Sims of old (and the Sims of old was pretty good.) Sims probably is the better blocker though.

Yes. Sim is the best RB we have at picking up a blitzing LB.

With Sims back in the lineup and Randall Dent starting on the O-Line, I wonder if our rushing game will be able to open up our passing game a little more. Lord knows we need it.

And it's probably only a matter of time before Pierson busts a long TD.

Seems like Sims' return will allow for Pierson to take on the role Weis was envisioning in the spring. And the fact that he's a good pass catcher is huge. When he caught that deep ball over the shoulder, my feelings about this offense started to change a little.

On that note, somebody posted the highlights of the Nebraska beat down yesterday. The one we scored 76 points in. At the 1:25 mark you see Jake Sharp take off like a bullet from backfield. No move, no fake, no chip block, nothing. Just a a flat burn toward the corner of the end zone. That linebacker had zero chance of covering the speedy Sharp and Reesing hit him in stride for an easy 6.

Pierson is a little faster than Sharp. Do the math. This would be a great first play. You have to get the safety locked on a receiver underneath and the LB alone with Pierson, but that shouldn't be too hard.

Somehow we have to break Pierson loose. I'm dying here. I need a Pierson fix. I think it was the Rice game where the commentator was so taken by that speed that he said "He kind of takes your breath away". Exactly. Hopefully now with Sims back, Weis can use Tony in the most efficient manner, and we get to see that speed wide open more often.

Please tell me you were the old guy dancing...

LMAO. I wish! White Owl is awesome! I wonder if he ever comments on here. I doubt it, but he should.

LOL on the pic Matt. Trippy! I'm going to go dig my old black light out of the attic and see if it works. Just a smidge contrasty, eh?. Might want to ease off the effects a little. Ha! Just kidding, always appreciate your efforts.