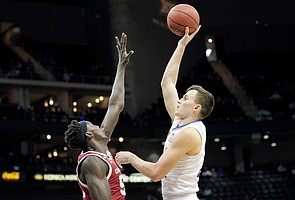 Kansas forward Mitch Lightfoot gets up a shot over Oklahoma during the Phillips 66 Big 12 Basketball Championship at the T-Mobile Center in Kansas City, Missouri on March 10, 2021.

Kansas had to play without its best big man in its postseason debut Thursday night at the Big 12 tournament. But at least the Jayhawks had one true post player to throw at Oklahoma — and a confident one at that.

Bold words for a backup who only played 33 combined minutes in KU’s four most recent games. Lightfoot spoke his productive night into existence, though, playing a key role in a 69-62 victory.

The 6-foot-8 senior didn’t start, as KU opened the night with a five-guard lineup, due to junior David McCormack following COVID-19 protocols and being unavailable. But once Lightfoot checked in near the midway point of the first half, he made sure to have an impact and give Self reasons to rely upon him more as the night progressed.

KU’s killer bench combo, Dajuan Harris and Lightfoot, connected for the first time seconds after Lightfoot subbed in, as the big man’s layup set the tone for his 11-point, four-rebound night.

“Obviously we’re missing David. He’s a huge piece of our team. I think I need to go out there and give us that inside presence. I wouldn’t say that I was trying to replace his shots — I don’t think we can replace him. He’s a great player,” Lightfoot said, when asked how he avoided feeling pressure while taking on more responsibilities in the tournament quarterfinal. “I’m looking forward to when (McCormack) gets back, but in the meantime I’m going to make sure we stay winning until he gets here.”

Lightfoot isn’t exactly the physical force that McCormack is defensively, but Lightfoot’s presence didn’t lead to routine opponent layups and points in the paint — which at times has been an issue with KU’s Lightfoot lineups in recent weeks.

He said he just tried to stay active on defense, especially when it was his responsibility to keep up with OU’s Brady Manek (19 points, 3-for-6 on 3-pointers).

“When Manek’s in it’s different than when their other big guys are in, because he stretches the floor so well,” Lightfoot said. “There were a couple of times he got the better of me, but great player and he can really shoot the ball. Most of the time the big guy isn’t the best shooter on the team, so there were a couple of mental errors by me.”

No doubt, Lightfoot had a longer leash than usual as KU’s sole rotation big. Good for the senior for recognizing that, and even cashing in on a 3-pointer (his second of the season) once he got into a groove.

“Mitch was great tonight,” said KU guard Ochai Agbaji, whose 3-point barrage in the second half held off an OU rally. “(Lightfoot) got a 3 in. He was great on the block. Defensively he was there, being active on Manek when Manek was in the game.”

His savvy showed up late in the first half, too. If you were wondering why Lightfoot was so quick to fire his second 3-point attempt, which wasn’t as attractive as his first, well, it was a two-for-one situation.

“Marcus (Garrett) was telling me to shoot it,” Lightfoot said of firing with 42 seconds left in the half and KU up 20. “If it goes in, great, but if it doesn’t go in we still get another possession to end the (half.)”

Eventually the game wasn’t so lopsided, as the Sooners’ offense revved up in the second half. But Lightfoot delivered in crunch time, as well. KU only had a three-point lead as the clock ticked down below 3 minutes.

But the 23-year-old Lightfoot, an old man by college basketball standards, wanted to keep winning, so he ran a side pick and roll with Harris to near perfection, pushing KU’s lead back to five with 2:40 to go. Lightfoot praised Harris (five assists) for his “great feel” in the moment.

“He fit that into a window that was about this big,” Lightfoot said, placing his hands close together in front of him. “He did a great job. Obviously I’ve got to convert on my free throw, but that’s neither here nor there.”

15 pts from bench, 4 steals, etc.. - that's one of the best production out of this year's team, i believe. Done in perfection by 2 bench players. Amazing! That was a different Lightfoot we used to see on the court. That's Professor Lightfoot! That's Lightfoot I was hoping to watch each and every game. He's got guts to score through physical, a perfect pick and roll. Let's hope he continue to shine. He's definitely the right big man tonight!

Loved seeing Mitch contribute. And he did a lot of little things that led to good outcomes. Twice he set screens that allowed for a lane to open up for a drive for a layup. He blocked out on the boards and tipped balls out, once inappropriately getting called for a foul. Making shots of course is key and he got 5 down. Who would have thought he would put up 10? Career high attempts?