Jayhawks will take scoring however they can get it 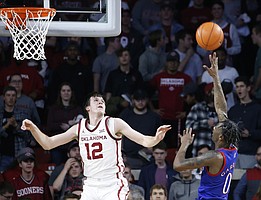 Replacing the 18 points per game leading scorer Devon Dotson typically brings to the floor wasn’t going to be a cinch for Kansas at Oklahoma.

Garrett said that formula isn’t ideal if Dotson’s out, which may or may not be the case Saturday at Texas.

“I feel like we need to have more balanced scoring,” Garrett said of three Jayhawks carrying the bulk of the scoring load. “I think Ochai (Agbaji) can help us out a lot with his offensive threat. But I think we definitely need more balance than just three.”

In this year’s low-scoring Big 12, though, beggars can’t be choosers when it comes to points.

Ask head coach Bill Self if he’d like to see KU with more than three players acting as scoring options without Dotson and he explained why he’ll take what he can get.

And he’s right, of course. If Dotson can’t play against the Longhorns, the Jayhawks (13-3 overall, 3-1 Big 12) won’t mind how the scoring is split up or who provides it — as long as it’s coming.

Self discovered a long time ago there are no absolutes in college basketball.

“I think it would be nice to have that, but I'm not going to say that that's a must,” Self said of spreading the wealth on offense and keeping defenders worried about more than three players.

In his early days on the sideline, when Self was in charge at Tulsa, he said, “one of the smartest players” he ever coached, Michael Ruffin, taught him a lesson about flexibility and adjusting.

“I said we’ve got to do this to win,” Self recalled.

Ruffin responded: “So, coach, if we don't do that, does that mean we're going to lose?”

Reflecting on the back-and-forth, Self called it “a great lesson” for him, and sometimes as a coach you just have to figure some things out as you go, within the flow of a given game.

“So, yeah, in a perfect world we'd love to have five guys in double figures, but I don't know if that's going to be possible,” Self said, “if you’ve got your leading scorer sitting out.”

The Jayhawks can’t bank on Moss getting 20 points again, like he did at OU, even if they’d love to see him once again go 6-for-11 from 3-point range. Maybe he will, but you can’t expect it.

They should be able to get more than the 7 points Agbaji had at OU. And it shouldn’t be too much to ask, between the four of them, for David McCormack, Christian Braun, Tristan Enaruna and Silvio De Sousa to put up more than the 8 combined points they contributed earlier this week versus the Sooners.

It doesn’t matter who shines, as long as the Jayhawks continue to play the kind of defense they have on the road this year (55.5 points per game for KU opponents) and cobble together 60 points. However they can get it.

It's the system, been saying that all along. If you rely too much on high-low inbound passing, how are you going to expect other players creating shots for themselves?
But if you teach those kids to play lots of pick and rolling, cuttings, lobbing, encouraging 3pt shooting; everyone - I repeat, everyone can become a threat night in night out. You don't rely only on 1-2 guys anymore.
It's that motion attack play - on the perimeter that screws players. They can't think creatively on their own, but to follow the same damn play - how do you expect them to excel in scoring? They see only one direction around the perimeter, not knowing the guy behind is cutting. It's a very inefficient offense play. A guy should've been able to shoot from the FT line, instead standing around just to pass the ball back out. Change the system, and improve players skills through drills, they'll become shooters/scorers!!!

Bingo Steve. We do have shooters but we suppress them due to the emphasis on getting the ball inside.

We are playing 4 on 5 with Garrett in the game.

He continues to have late game turnovers. His defense is going downhill, including going under on screens.

He can lob or drive if it's wide open. Otherwise it's a turnover or he stalls the offense.