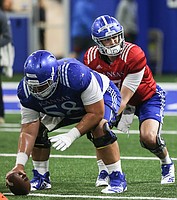 If Kansas football coach Les Miles and his assistants currently have a depth chart they feel good about during the final stage of spring practices, they’re certainly not making it public.

However, during the Jayhawks’ open practice on Thursday — a light, pads-free warmup for Saturday’s spring game — the 11-on-11 session provided a glimpse of what KU’s two-deep just might look like right about now.

The first-string units that were in place for the 13th practice of the spring may not even look exactly the same when the Jayhawks reconvene under the lights for No. 14, when fans will get to watch KU scrimmage at David Booth Kansas Memorial Stadium.

Still, this particular practice was the first prolonged opportunity those outside of the program have had this spring to watch the offense and defense go toe-to-toe.

More players will join the roster in the summer, and some undoubtedly will factor into the two-deep at preseason camp. So it’s safe to describe the current state of the various position battles as fluid.

For Thursday at least, here’s who started on each side of the ball when the team period began inside KU’s new indoor practice facility.

After all of those presumed current starters took a fair amount of reps, coaches rotated in other Jayhawks.

Here are the players who showed up most often in reserve roles as KU spent most of its afternoon session pitting the offense against the defense.

Other reserves got their fair share of reps at the practice, as well. These are the other backups who participated during the 11-on-11 work.

Again, there were no pads involved, so there wasn’t any real hitting or tackling. But there were some players who stood out as the KU football program opened its practice up to both the student population and members of the media.

A senior safety, Mike Lee, intercepted two passes on the afternoon. Another defensive back from New Orleans, junior safety Ricky Thomas, made another pick.

Although several receivers had a crack or two at some deep shots, it was junior Stephon Robinson Jr. who hauled one in successfully, despite solid coverage.

What was the most impressive catch of the day? Quarterback Thomas MacVittie gave that honor to one of the tight ends.

“I think our tight end, Sosa, had a one-handed, kind of behind him,” MacVittie recalled of a snag by senior James Sosinski that drew oohs and ahhs from his teammates nearby on the sideline.

“That just shows how athletic he is,” MacVittie added of the grab.

James Sosinski with the snag on a pass from Miles Kendrick #kufball pic.twitter.com/n9WR1GWZV3

KU’s spring game is scheduled to begin at 6 p.m. Saturday. It will be available to stream on ESPN+ and broadcast locally and throughout the state on various cable platforms.

Where is Petty Tom Keegan and his idiot minions complaining about disclosure of depth chart and no other head coach would keep information private?

Hi there. Not disclosing a depth chart before even having the spring game is much different than waiting until the first week of the season to announce who your starting QB will be.

Benton - Parker was the big catch in recruiting. Do you see him making the 2 deep? Are there others to look forward to?

I'm seeing on the e-network that we signed a kid named Kenny Logan out of Saint Augustine, FL. I don't remember any discussion of him on NLOISD, and haven't heard anything about him since. It says he signed 2/6/19. It is a real nice list of schools/offers.

Will you do a post-spring FB roster update, look into the future?