Some hope for Daylon Charlot's future with Kansas 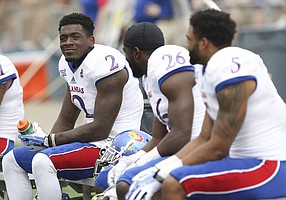 Kansas receiver Daylon Charlot sits with his fellow position players during the 2017 Spring Game on Saturday, April 15 at Memorial Stadium. by Nick Krug

Believe it or not, there may be a Saturday in the future when Kansas football fans don’t feel inspired to file a missing persons report for receiver Daylon Charlot.

A much-hyped sophomore who transferred to KU from Alabama, Charlot expected to put up gaudy numbers and star alongside Steven Sims Jr. in the Jayhawks’ Air Raid offense this season.

However, as a borderline second- or third-string wideout during KU’s 1-3 start, Charlot has experienced few in-game reps. A third of the way through the season, the 6-foot, 195-pound, former four-star recruit has made just one catch for zero yards — a reception that didn’t amount to anything versus Central Michigan. The names of 13 Jayhawks (four of them running backs) appear before Charlot’s on a list of the team’s most productive receivers.

So why should we expect anything to change on the “Where’s Charlot?” front? It’s possible he could be on the path to a breakout game in the near future.

Look to Khalil Herbert’s head-scratching rush totals from earlier this season — one carry for 4 yards vs. Southeast Missouri State; two rushes for 6 yards against Central Michigan. The numbers puzzled at the time but look even more outrageous now, following outings of 137 and 291 yards for the sophomore running back.

“Yeah, Daylon’s kind of a combination. He’s been nicked up as well. He’s doing so much better now out at practice. He had a really good day yesterday, I thought,” Meacham said. “As a coach, that’s what our job is, to assess what you see, and put a guy in based on what he’s doing. You’re going to get what you see.”

There was a time just a few weeks ago when Herbert hadn’t given coaches enough reasons at practices to use him more during games.

“I know a lot of people are like, ‘Yeah, you’re really smart. The guy rushed for 300 yards and he was on the bench.’ But the thing that fans, I urge them to kind of take a look at, is that they’re not at any of our practices,” Meacham explained. “They don’t see any of our kids day-to-day. They have no idea why. You can only assume, which is fine. Because if we didn’t have fans, we wouldn’t have a job, so I appreciate every dadgum one of them. But we’re making decisions based on practice. And I hadn’t seen (Herbert) play in a game yet, but I’d seen him in practice a lot, and he just didn’t look very good.”

Meacham said KU’s coaches have since learned Herbert is a “gamer,” and now they’re seeing him practice “a lot better,” as well, because his confidence is growing.

The man in charge of KU’s offense didn’t claim Charlot will be able to reproduce Herbert’s trajectory to a starring role, but there’s no denying the former Alabama receiver and other Jayhawks now have an easy example to follow if they want to burst out of the depth chart’s lowest rungs.

The only way to see if he's a gamer is to let him play. It's not like he's a no talent bum and we picked him up from some community college in Montana. We got him from Alabama, a team that could probably beat the Browns. And Saban wanted him to stay, that has to say something. So he's obviously talented and needs to be on the field regardless of the coaches stubborn habits. This program doesn't have time for stubbornness, we need wins asap, and to do that we need to find the gamers and get them on the field.

I wouldn't put too much faith in what Saban had to say after his departure. It's easy for a coach to say he wanted him to stay when he knows the guy is gone. You notice he didn't play him when he was there. If he's loafing in practice now, he'll be on the bench until he puts out the energy the coaches want from him. I was disappointed, too, but it sounds like he's getting in the groove.

Saban is the best coach in college football. He doesn't need to say things just to say things. Also, not many freshmen play their first year at a school like Alabama. Try again.

This certainly fits the mold of those who love the game enough to practice hard and also have a high FB IQ and learn quickly.
Our offense is very different from that of 'Bama.
There was always going to be an adjustment. Maybe he has been discouraged some as well while enduring the learning curve.
Let's see if this kid can hang in there and become what his potential indicates.
Let's see if he will listen to the coaches and trust them and work as they teach.

Hopefully this is evidence of no hypocrisy in #EARNIT