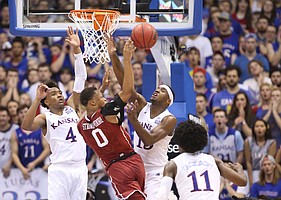 When discussing the strengths of the top-ranked Kansas basketball team, one of the last facets likely to come up is the Jayhawks’ bench.

KU’s substitutes definitely haven’t derailed the team’s efforts — Kansas enters its regular-season finale Saturday at Oklahoma State at 27-3 overall and 15-2 in the Big 12. It’s just the backups haven’t blown anyone away, either.

Even so, coach Bill Self has to feel more positive than negative about the state of his bench with the postseason approaching, due to the recent resurgence of sophomore Lagerald Vick. The 6-foot-5 guard from Memphis has established himself as the clear sixth man.

Reserve bigs Carlton Bragg and Dwight Coleby, though, have not left the same kind of impression on their coach. Asked earlier this week what he likes about what the Jayhawks are getting from Vick, Bragg and Coleby, KU’s coach mentioned his big men only to acknowledge each had one memorable performance over the past few weeks.

A 6-10 sophomore from Cleveland, Bragg turned in his best performance of the season against TCU, going for 15 points and 7 rebounds. The very next game, at Texas, 6-9 junior transfer Coleby had his foremost showing in a KU uniform, posting 12 points and 4 boards in 13 minutes.

Still, Self wants more from them, and he doesn’t even worry that much about how many points Bragg or Coleby — or even Vick — add to the Kansas mission. KU’s coach, who has navigated the program to 13 consecutive Big 12 titles, referred to bench scoring as a statistic that is “way, way, way, way overrated.” So he couldn’t care less that the Jayhawks’ bench players out-scored their counterparts in six straight games before losing that battle by 2 against Oklahoma earlier this week.

Vick’s scoring and shooting aren’t always there, but Self mentions him as the vital component of the bench unit because the springy sophomore can inject the lineup with energy.

Obviously, Bragg and Coleby can’t fly around the court the way Vick does. But they could win their coach’s favor by emulating the least showy player on the roster, starting center Landen Lucas. 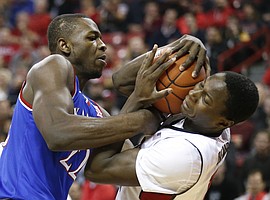 Kansas forward Dwight Coleby (22) wrestles for a ball with UNLV forward Cheickna Dembele (11) during the first half, Thursday, Dec. 22, 2016 at Thomas & Mack Center in Las Vegas. by Nick Krug

So much of a glue guy it wouldn’t be surprising to see his face on a bottle of Elmer’s, Lucas provided an easy guide for Bragg and Coleby. According to the starter, here’s what KU needs out of either relief big when the fifth-year senior is on the bench:

- “Just to come in and defensively be in the right positions, making sure that it’s tough for the other team’s bigs to score,” Lucas began.

- “You know, use your fouls wisely — if you’re gonna foul, foul somebody. Make sure there’s not and-ones.”

- “Making sure that you just make the people that surround you better. That’s what I try to do and hopefully when I come out the game they can come in and continue to make the other guys better.”

- “And that really starts with the defensive end … and also rebounds and doing the small things.”

There you have it, straight from an expert on the subject. Bragg and Coleby can impact KU victories by taking the Lucas approach. When big men do that type of dirty work, the more enjoyable rewards, such as dunks and blocked shots, tend to follow, as well.

Vick might be the most reliable member of the Kansas bench right now, but there’s no reason Bragg and Coleby can’t try to catch up. Self knows Vick can make winning plays even without scoring. Now it’s time for the backup big men to do the same.

Clearly we still need Bragg and Coleby to follow Lucas's advice. No matter how high Vick can jump, he still can't guard bigs. I guarantee that foul trouble for Lucas will become a bigger issue in the tourney as we start to encounter elite big guys.

I have no hope for Carlton Bragg. He is working on becoming my least favorite Jayhawk of all time.

I can't say you're totally off base, Freddie. Going into the season, I thought Carlton had the biggest upside on the team, and sadly, he hasn't come close to getting there. Of the two, I have a lot more hope for Coleby in the tournament.

With Carlton and Dwight both coming into their own, KU occasionally will have the luxury of two bigs on the court together against teams with monster front courts. That will make our regular lineup seem like a change of pace and force opponent to make mid-game adjustments. Same for a few minutes of zone, or putting on a press for a couple of possessions. Five seconds o.o.b., ten second violations, shot clock expirations are the BEST turnovers we can force.