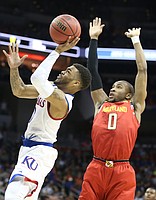 Kansas Jayhawks guard Frank Mason III (0) gets to the bucket past Maryland guard Rasheed Sulaimon (0) during the first half, Thursday, March 24, 2016 at KFC Yum! Center in Louisville, Kentucky. by Nick Krug

Perhaps it is far too early to claim Player A will beat out Player B and Player C for some college basketball award that will be handed out 10 months from now. Maybe we should save such discussions for weeks before the season starts, instead of months.

Whatever your take on that front, it is at least noteworthy that those debates already are taking place in some circles, and a Kansas veteran might be in line for some major hardware by the end of the 2016-17 season.

While looking ahead to next year in the Big 12, NBC Sports predicts not only a 13th consecutive regular-season championship for Bill Self’s Jayhawks, but also a Player of the Year honor for senior-to-be Frank Mason III.

It’s not too farfetched of a conclusion when you consider all the talent the Big 12 has lost from this past season.

Even the all-conference third team featured three players who won’t be back next season: seniors Rico Gathers, Isaiah Cousins and Ryan Spangler. Baylor’s Johnathan Motley and Wesley Iwundu of Kansas State will have a crack at making bigger names for themselves and contending for a first-team spot in 2017, or perhaps even challenging the Big 12’s other top talents for the honor of Player of the Year.

So if Mason is one of the top contenders for the coveted award next season, who else might push him or surpass him in the race? 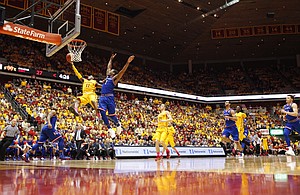 You have to start with Morris. The Cyclones, like the rest of the mostly rebuilding Big 12, honestly, don’t seem likely to threaten KU for a league championship. However, if ISU can finish in the top three or four and Morris puts up big numbers — and he’ll have a chance to lead Iowa State in scoring while still distributing as much as ever — the Cyclones’ lead guard could turn out to be the favorite.

Athletic Baylor big man Motley could become one of the league’s breakout stars next season, now that Prince and Gathers won’t be part of the Bears’ frontcourt.

Looking at other younger players in the conference poised for a leap in productivity, one would think West Virginia’s Jevon Carter will become Bob Huggins’ featured guard next season, and the Mountaineers seem to remain competitive in the Big 12 regardless of who Huggins puts on the floor.

Texas guard Kerwin Roach Jr. (12) drives inside and shoots over TCU forward Devonta Abron (23) during the first half of an NCAA college basketball game, Saturday, Jan. 9, 2016, in Fort Worth, Texas. (AP Photo/Ron Jenkins)

With all the upperclassmen Shaka Smart is losing at Texas, a blossoming player will have to carry the load. Here’s a vote for Kerwin Roach Jr. emerging as a havoc-inflicting guard. The Longhorns might be a year or two away from really challenging KU for a Big 12 title, but next season Texas will start looking more like a Smart VCU team and less like a Rick Barnes team.

Implausible as it sounds, Oklahoma State, which finished ninth in the Big 12 in Travis Ford’s final season as head coach, might have a pair of dark horse candidates for player of the year. If either veteran Phil Forte III (who only played 3 games last season after suffering a ligament tear in an elbow) or young dynamo Jawun Evans put up eye-popping enough numbers and new coach Brad Underwood gets the Cowboys back into the top half of the league, don’t count out one of these explosive guards.

Kansas guard Devonte' Graham (4) delivers on a lob jam before Baylor guard Al Freeman (25) during the first half, Friday, March 11, 2016 at Sprint Center in Kansas City, Mo. by Nick Krug

If you think about it, though, Mason’s toughest challenger in the race for Big 12 Player of the Year just might be in his own locker room. Should the Jayhawks roll through the conference as expected it would be hard to make a case for a player from another school winning. But it isn’t too difficult to see Devonté Graham becoming just as legitimate a candidate as Mason for the league’s top individual honor.

Plus, can we really count incoming KU freshman Josh Jackson out of this conversation? Probably not at this point. Should Jackson indeed come in and essentially play as much as Selden did this year on the wing, while at least matching the freshman-year production of Andrew Wiggins, Jackson would deserve some consideration, too.

If Self has the team dominating all season, the discussion might not be if a KU player will win Big 12 Player of the Year. The better question could be: which one?

Can this be? I'm sure that the Chicken Littles were calling Mason (and Graham) a mid major guard last January and panicking because a new starting PG hadn't been recruited...

"Should the Jayhawks roll through the conference as expected it would be hard to make a case for a player from another school winning."

I don't think that it's ever been hard to make a case for a player from the also-rans winning the CPOY award. It was an easy case for Buddy Hield this year. In fact 9 out of the last 12 years the award has gone to someone other than a Jayhawk, including the names Kevin Durant, Michael Beasley, and Blake Griffin.

Talking about the odds that our Jayhawks have of winning the award, I'd give the edge to Jackson based on the expectations we all seem to have for him. Then I'd say Mason is close second, Graham is right on his heels, and Landen Lucas is the potential dark horse candidate who could have a surprisingly strong season. Svi may be poised to challenge as the team's leading scorer however.

The way a typical Coach preaches sharing, KU players are sometimes overlooked in POY voting, too bad. Having said that I don't see Frank getting it. He might be the only third best starter on the Jayhawks. Which is cool, if Frank is third best on your team, you're good.