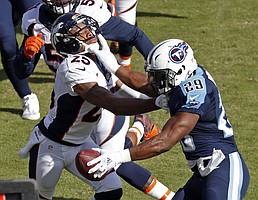 On a full Sunday slate of NFL games, few drew as much attention as a low-scoring affair in Nashville, Tenn., between Denver and Tennessee. But as you probably know by now, the buzz generated for all the wrong reasons.

Former standout Kansas football cornerback Chris Harris Jr., now one of the league’s top defensive backs with the Broncos, took what appeared to be a malicious cheap shot from Titans wide receiver Harry Douglas in the first half.

On a rushing play for Tennessee’s Derrick Henry, Harris came nowhere near making a tackle, but Douglas dove low toward Harris’ right knee as if to make a block.

"I never had a player try to end my career before," Harris told reporters afterward. "That's not football. He tried to end my career with a hit like that. ... [The officials] didn't call it, but hopefully the league can take a look at that."

Added Harris, who avoided suffering significant damage on the play by pulling his leg backward just in time: "Whatever the biggest fine is, that's what he should get."

The questionable play by Douglas might have been a footnote for the weekend had Harris’ pal and former KU teammate Aqib Talib not gotten involved, too. On the very next play, Denver’s other top-notch cornerback let the Titans receiver know what he thought about the low hit on Harris.

Talib went right after Douglas, inciting a small brawl on the sideline.

Aqib Talib went after Harry Douglas on the next play. pic.twitter.com/3Y6cEkiTS2

Following the game, Talib wasn’t done, calling Douglas a “sorry player,” and vowing to “beat his ---" when he sees him next.

Harris, too, didn’t mind sharing his thoughts on the Tennessee receiver.

"I was nowhere near the play, but that's why he's out there, to be a dirty player," Harris said.

"I'm a tough player. I'm a gritty player," Douglas responded, through reporters. "I'm not a dirty player, no matter what anybody says."

Thank God for covering me cuz I thought my knee was gone . 🙏🏿

Both the defending Super Bowl champion Broncos and Harris consider themselves fortunate the play didn’t cost the star corner playing time, with the end of the regular season quickly approaching. At 8-5 following a 13-10 loss at Tennessee, Denver currently holds the sixth and final playoff spot in the AFC, with three games left to play.

Despite Douglas’ low “block,” Denver won’t be cheated out of the use of one of its top players, which should be good news to Kansas football fans, even if they prefer another team from the AFC West.

NFL needs to lay a serious penalty on Douglas......

I don't see any way that's a "questionable play." If you watch the gif you see there is no way that is not intentional. Douglas should be fined and warned and if he does it again then ban him from the NFL. There is no call for that kind of play.

Totally legal play according to NFL rules. Now should he have done that...well that is up to the player and coaching staff that he is under. When I initially I saw that I thought it was a dirty play that does not belong in the NFL. Looking back on it Harry Douglas use to play in Atlanta where his position coach was Terry Robiskie, who is notorious for teaching his WR to cut block. You want to send a message to a corner that he better keep his head on a swivel and not chase downfield. You LEGALLY cut his knees. You don't have to do it every play; all you have to do is do it once. I guarantee for the rest of that game Harris kept his head on a swivel. The NFL is a win at all costs, us against them league. What HDJr did is frowned upon but he has every legal right to do it.
For a play like that and without looking back at the film no prior bad blood between HDJr and Harris that is totally a players call (morals) to send a message that you are wiling to do anything you can to win.

That's absolute BS. The player was nowhere close to where any action was. This was not to provide a block to clear space for the runner, nor to provide space for a pass or for any reason other than to do injury to Chris Harris Jr. The player should have had a flag thrown for unnecessary roughness and a warning issued for unsportsmanlike conduct, a second one would have resulted in an ejection. This type of play is not in the name of sportsmanship - recall the penalties handed down by the NFL for "bountygate". When penalties are handed down by the NFL for this, you'll see this is not something the NFL is willing to allow in your bad-boys image of the league. Maybe 20-50 years ago, but not today, with tens of millions of dollars wrapped up in contracts for players.