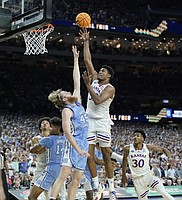 He also broke down, at least partially, what will go into his decision on whether to play another year of college basketball or make the jump to the professional ranks and also talked about how having the option to even consider coming back to KU was a luxury that many players do not get.

KU coach Bill Self said he thought McCormack, Christian Braun and Jalen Wilson all would make their decisions about their futures known in the next week or so. Self also said no one should hold their breath over All-American Ochai Agbaji considering doing the same.

"It's time for him to go," Self said of Agbaji, who joined McCormack and Mitch Lightfoot in winning this year's Danny Manning Mr. Jayhawk Award.

Kansas forward David McCormack on the emotions of the team banquet & his upcoming decision by KUsports.com