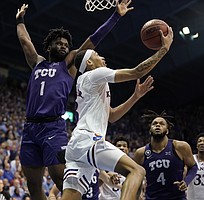 Kansas guard Dajuan Harris Jr. (3) gets past TCU guard Mike Miles (1) for a reverse layup late in the second half on Tuesday, March 3, 2022 at Allen Fieldhouse. by Nick Krug

1 – Dajuan Harris Jr. – If you just look at the numbers, you might not necessarily agree here. But nobody, not even Agbaji, had as much of a direct impact on winning and losing in Thursday’s game. Sure, the block at the end was massive, with KU clinging to a 3-point lead. But much earlier than that, when Harris seemed to ditch the 1,000-pound weight on his shoulders that was holding him down and holding him back, was the moment when things really started to click for him. It was as if he simply said, “I’m tired of this. I’m just going to play ball.” And then he went and did it. He was more aggressive offensively, seemed to find his confidence and finished with 11 points on 5-of-9 shooting, sparking the Jayhawks’ surge in the second half. Kansas coach Bill Self said after the game that KU is a better team when teams have to guard Harris. They’ve known that all season, but the reminder — and subsequent big time victory — might have come just in time.

2 – Jalen Wilson – No one embodied the idea that the Jayhawks were willing to give better effort than they did in Tuesday’s loss to TCU better than Wilson, who finished with 10 rebounds in 34 minutes. He also scored nine points, drew seven fouls, dished three assist and swiped two steals without a turnover. It didn’t matter if he got to the rim on the drive or if he got anywhere near the rebound on a miss, Wilson was going to go and go and then go some more in this one. He spoke after Tuesday’s loss about needing to be better on a personal level. And then he backed it up.

3 – Ochai Agbaji – For a while, it looked as if Agbaji was going to go for one of those re-donk-ulous nights. He scored 12 points on 5-of-6 shooting in the games opening minutes, making one more shot and scoring one less point than he did in the entire game during Tuesday’s loss at TCU. It eventually leveled off and he made just three more shots the rest of the night. But he never stopped being aggressive and he was perfect at the free throw line, leading Kansas with 22 points in 39 minutes.

4 – Joe Yesufu – Joe’s numbers don’t look like much, but they also don’t nearly show how important he was in this game. Self said multiple times this week that TCU was a bad matchup for Kansas because of their extreme athleticism and interchangeable parts at the 2, 3 and 4 positions. Yesufu is one of the Kansas players that can match that athleticism. And when his mind is right, like it appears to be currently, he’s quite good at it. I thought Yesufu looked quick, explosive and athletic for the second game in a row — albeit in limited minutes — and also was absolutely fearless. Kansas is going to need more of that and Self said Yesufu needs to play more moving forward. That line on Thursday night might’ve unofficially signaled the beginning of the end for Remy Martin.

5 – Christian Braun – Braun was his own worst critic after this one, saying he didn’t do enough and wasn’t aggressive enough to help the team like he believes he should. Self gave him a bit of a pass, again pointing to TCU’s athleticism and the difficultly that present for Braun while trying to get open. Regardless, he hit two huge 3s in the second half and finished 4-for-4 from the floor for 12 points and 6 rebounds in 35 minutes. It’s good for the Jayhawks that his standards and expectations are higher, but those aren’t awful numbers. He could’ve shot more. But he could’ve done that and also been 4-for-10 instead of 4-for-4.

6 – David McCormack – McCormack’s best contribution on Thursday night was his 6-for-6 clip at the free throw line. Most of them were big free throws and they led to him finishing with 10 points. The athleticism and size of TCU created problems for McCormack throughout the night, but give the guy credit for working his ass off to fight through it. He battled for position, sacrificed his body on offense and defense and made one key pass out of a double-team that led to one of Braun’s key 3-pointers. Heading into the final game of the regular season, McCormack is averaging 10 points and 7 rebounds per game. Those numbers probably look and sound better than many think he has been. But they’re also pretty darn good on a team that has three clear-cut scoring options ahead of him.

7 – Mitch Lightfoot – Lightfoot was one of those guys who showed beyond a shadow of a doubt that, come hell or high water, he was going to give better effort on Thursday night than he did Tuesday night. At one point, he gave a little too much. After jawing with TCU bruiser Eddie Lampkin before an inbounds play, Lightfoot and Lampkin were warned by the officials. On the play that followed, Lightfoot flushed a lob and was whistled for a technical that Self called “senseless” because of what the conversation with the referee should have told him. All eyes were on the two of them and nobody was going to get away with anything. Lightfoot didn’t, but the sequence still had value. Not only did it give Kansas two points but it also was plain-as-day evidence that KU was not interested in getting bullied and punked in this one like they were on Tuesday night. That’s big for the psyche of a team and Lightfoot deserves a lot of credit for making sure his team felt and operated that way in this one.

8 – Jalen Coleman-Lands – Coleman-Lands airballed his only shot attempt and played just 3:41. But he also fought for a couple of rebounds and showed the kind of grit and fight that Kansas was missing the other night. That’s a senior and a mature dude knowing how to find a way — any way — to help. The only real knock on him is that he again put the ball down on the deck before launching the shot. He has to stop dribbling so much. It’s simple — shoot it or move it and then move to get it back to shoot it. He knows that. But knowing that and executing that, in the heat of the action, can sometimes be two dramatically different things.

9 – Remy Martin – For the first time all season, there’s really nothing to say about Martin. He played just 3:33 and didn’t look particularly good or bad while he was out there. He may continue to get looks and it might wind up being a hot hand sort of thing. As in, if he happens to look good and be productive Self will leave him out there until he doesn’t. But given the talk of Yesufu’s minutes and the fact that Joe looks faster, more explosive and more confident, it would make sense for Martin to be an as-needed type of player the rest of the way instead of a part of the rotation.

10 – Zach Clemence – He yanked a couple of questionable 3-point shots and sagged off of TCU’s Mike Miles Jr. when he should have done anything but that. It wasn’t the encore performance that many KU fans hoped from the 26 seconds of magic that Clemence gave at TCU. But that doesn’t mean there might not be more ahead. It’s a complete wait-and-see proposition at this point.

11 – KJ Adams – Adams didn’t shoot or miss as often as Clemence did, but he did foul a 3-point shooter in his 20 seconds on the floor. That will get you last in these rankings just about every time.

Kansas' Bill Self on beating TCU, Dajuan Harris' emergence and the Big 12 title by KUsports.com

Hmmm? It was just a few games ago that DaJuan had an 0-fer game and was ripped for not belonging.

Remy Martin is not helpful. He is a mess.

I agree. I said that he might be a distraction if things were not going his way when he signed, that was wrong. He isn't even a distraction.

Your right Dirk. I guess whoever was ripping on him was thinking like Bill Self. DaJuan himself said coach had to call him out in the film study to get the motivated Harris we saw last night.

Instead of his box score looking like a baseball scoreboard of a no hitter, he had a rebound, steal, block, a 3 pointer, 11 total points to go with 3 assist.

His play was actually the difference in us winning this home game to be candid. Just like he could have helped us win at TCU, if he was motivated.

Are you saying that us janitors cannot call out poor play, even when the coach does and the player agrees, as one of the reasons we lost at TCU? Or that we are never ever again allowed to question anyone's performance, or lack of one?

It would be interesting to do a line graph of player trends with these scores. I know it would be all over the map, but to me the bright spot would Wilson in a trend improvement graph analysis. He's really taken on a huge share of the load in terms of aggressiveness and rebounding. He seems to be epitomizing what is good about KU basketball right now.

I remember how coach was really so optimistic early on. He this was a much better team than average for KU. I was optimistic that was the case as well. I have to adjust to the current realities that is a good team, but not a great team as Jay Bilas would say. Thank goodness we built early good W-L overall and league records I guess Kentucky seemed to be a major wake-up call for me re this team's realities absent intangibles that can change game outcomes.

Really thrilled about Dajaun's play last night. I really think he has a lot more inside him that can come out. Just needs a confidence level to match his ability level.

I like the line graph idea. Lemme see if my old man skills can pull that off when I get some more time. Thanks!

Remy Martin has been a true disappointment all season. The guy who was named preseason Big 12 Player of the Year, has rather been the Big 12 Dud of the Year.