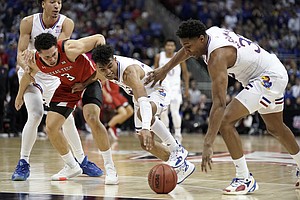 1 – Remy Martin – He played 26 minutes in KU's 74-65 Big 12 title game win over Texas Tech on a night when — full disclosure — I said I’d take the under on 10 minutes. And they were all important and all ultra-productive. Arguably Martin’s best game as a Jayhawk featured him scoring the final 10 points of the first half for Kansas, which led by one at the break. He looked quick, made shots, pushed the pace hard and also seemed to be having a ton of fun — Remy-type fun. He continues to say that he’s here to win and happy with any role he gets. And that’s what you want to hear. But it’s clear that when he’s more involved and can feel like his coaches and teammates trust him, Martin brings an entirely different look and dimension to this Kansas team. That’s great news for the Jayhawks and not so great news for their future opponents.

2 – David McCormack – McCormack had a big time double-double (18 points and 11 rebounds on 5-of-10 shooting and an 8-of-9 clip at the free throw line) and you could see it coming pretty early on. He started the game with a bucket in the post and was fearless in there all night long. I cannot remember seeing McCormack work quite so hard for position, constantly posting and sealing bigger and smaller players and letting his teammates know when he wanted the ball. His limited minutes in the first two games of the tournament kept him fresh and allowed him to be a big time factor in the title game and he took full advantage of it. The KU big man may not always be the easiest on the eyes, but no one should question his heart and desire. They’re there every night. And on this night they led to massive numbers and an even bigger KU win.

3 – Jalen Wilson – Scoreless in the first half and a little too content to settle for jump shots, Wilson flipped the switch in the second half and started getting grown-man buckets on the regular. He scored all 12 of his points in the second half and got all five of his baskets right at the rim, either in the post or on downhill drives. Wilson also grabbed 5 rebounds on the night and, like many of his teammates, was up for the challenge of battling for every square inch of space in the paint. Kansas coach Bill Self said Wilson was the Jayhawks’ best player in the second half, and the KU sophomore continues to look so comfortable on the court and play with so much joy. Those two facts lead to serious confidence in most cases and Wilson is playing with plenty of it.

4 – Ochai Agbaji – Agbaji’s buckets all seem to carry extra weight right now. For one, they fire up the crowd more than almost any other. For two, they seem to give his teammates an insane amount of confidence. And, for three, he seems to be getting them on his terms and where he wants them. He hit 3 of 6 3-point attempts tonight and also made 5 of 6 free throws for 16 points. His five turnovers, along with the strong play of many of his teammates, knocked him down a few spots, but he still did more than enough to lock up Big 12 tourney MVP honors, making him just the fifth player in the conference’s history to win regular season player of the year and tournament MVP in the same season. For those who might be interested, my Big 12 all-tourney ballot included: Agbaji (as MVP), Lightfoot, Bryson Williams, Umoja Gibson and Mike Miles Jr.

5 – Christian Braun – He was just 3-of-7 from the floor, but 8-of-9 at the free throw line. And the hard-charging left-handed finish late in the game that put Kansas up 66-60 was as good a basket as there was all night long. Braun snagged a couple steals and grabbed 5 rebounds on a night when it felt like he had twice that many. The reason? Simple. He showed up ready to match Texas Tech’s intensity and physicality and played 36 minutes as a result.

6 – Dajuan Harris Jr. – Wasn’t his night. He picked up a couple of fouls early and played just 19 minutes total, missing all three shots he took, all of them 3-pointers. Self made sure to point out to anyone who would listen that Harris is still rock solid and a huge part of this team. The talk, along with his absence on Saturday, was less critical because of the play of Martin. And if both can factor into KU’s run in the next couple of weeks, the Jayhawks suddenly have even more variety and options to choose from.

7 – Mitch Lightfoot – After back-to-back strong outings, Lightfoot was much quieter in this one. Part of the reason for that was Texas Tech’s relentless attack inside. Lightfoot, who has outstanding timing on blocked shots, was this close on at least two or three Texas Tech shot attempts and nearly got them. The other part of the reason was his departure from the game with a knee injury. It was not known after the game how serious the knee sprain is. And Lightfoot’s spirits seemed good, both during the final minutes on the bench and during the postgame celebration. We’ll know more tomorrow, I’m sure. His availability might be in question heading into next week and it also seems to be pretty important.

8 – Joe Yesufu – I have continued to like what I’ve seen from Yesufu in terms of his competitiveness and sense of belonging. He hits the glass hard, pushes the ball up the floor even harder and seems to be comfortable doing both. His offense is pretty hit-and-miss right now, and it seems like he might be better off moving the ball more and shooting less when he’s out there. That said, if he finds an open shot and can stay in rhythm, his teammates and coaches will all want him to take it.

9 – Jalen Coleman-Lands – He played just 2 minutes and seemed to get eaten up defensively. Just wasn’t his night. Nothing has changed for J-Cole, though. He knows his role. He’ll be out there when he’s asked to be and he’ll be ready.

10 – KJ Adams – I remember seeing him check out, but I don’t recall seeing him check in. Think he only played a handful of seconds. Depending on the status of Mitch Lightfoot moving forward, both Adams and Zach Clemence (who did not play on Saturday) might need to be ready for more action. Might. With Remy Martin doing his thing of late, KU could elect to play small if Lightfoot is limited and McCormack needs to rest. Time will tell.

Kansas players cut down the nets following their Big 12 tournament win vs. Texas Tech by KUsports.com

Kansas' Bill Self, Christian Braun and Ochai Agbaji speak after winning the Big 12 championship by KUsports.com

Remy Martin on the title of Big 12 champion & his play in Saturday’s title game by KUsports.com

Tourney MVP Ochai Agbaji during the on-court celebration of KU’s win by KUsports.com

Kansas coach Bill Self on the court after winning the Big 12 tourney title by KUsports.com

Matt. as usual, great write-up. I agree with the ratings. Good thought and support behind your choices.

Remy provided such a spark! Such intensity. Remy's fast improvement seemed like quite the intangible he brought. Intangibles can be all the difference, especially in March madness games where a loss stops dead the "survive and the move-on" path forward.

I can see why our HOF coach reads this column. I don't know how to get into print so much in so little time, but we are all glad you do.

I also got to thinking about Remy’s comment that this is his first time cutting down the nets. Got me wondering about how many players, even great players, go through their careers without experiencing that celebration.

A month ago, Joe made a comment about Remy talking him through some frustration to realize the value Coach puts on all the little things. It seems to me that has made the difference. I couldn’t begin to tell you what all the little things are. My guess is that Joe not only is doing more of them, but also appreciating Coach’s guidance that much more vs complaining to himself about “it was just something little”. Really common for ordinary Joes, and Janes, but why Coach is among the best. Why some leave and others stick it out to celebrate.

Great to see Remy getting some props. It has become fashionable to pick at certain parts of his game, while all of our other players get a pass. Ochai makes more than his share of TO's, but he carries us in so many other ways. You could look at any of our other starters and find weakness in their defense, coach would clearly tell you this is not one of his better defensive squads, yet Remy is the guy people love to pick on when he slips up. Both him and Harris are always getting backed into the paint when an opponent can do it and there is not much either can do due to their size. They both do alot more as far as steals (Harris) taking charges (Remy) and both are great on assists.

Matt - Do you ever get to talk to the redshirts, Cam and Kyle? Gauge how they are doing? Obviously not a March Madness article; just a bit of wondering about the future. Maybe something for April/May when players start to declare (nba and portal). There could be a scenario where next year is almost a total reboot.

And they were all important and all ultra-productive. --- Matt, spot on. Martin has court vision, split sec decision - he's the reason why Wilson got his points, CB started to wake up - all of a sudden, team played fun ball. McCormack did what he's supposed to, he'd have to watch out on D, though. I noticed he left the rim unprotected helping out the perimeter, more than a couple times. He played bigger than any TT players yesterday. Gotta give props to him for those hustle plays!

To Dream the impossible Dream comes to mind with our wayward Remy.

To dream the impossible dream

To fight the unbeatable foe

To bear with unbearable sorrow

To run where the brave dare not go

This was his quest,

No matter how hopeless,

No matter how far.

And one man, sore and covered with scars

Still strove with his last ounce of courage

To fight the unbeatable foe

Mom all those endless trips when I was young to Starlight were not wasted!!!