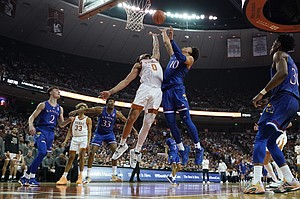 1 – Jalen Wilson – Wilson was great from the jump, attacking the UT defense and showing that he could get whatever he wanted most of the night. He was not immune from mistakes, of course. He turned it over three times and also missed two free throws. But his team-high 18 points and team-best 11 boards showed his value. Two of the rebounds came from air balls by teammates that he cleaned up and almost made look like passes. The craziest part of Wilson’s stat line was the two zeroes in the 3-point column, as in zero attempts and zero makes. The irony there, of course, is that Self desperately wanted Wilson to yank a 25-footer in the final five seconds before Texas could foul to put him on the line with KU trailing by three. He didn’t. The foul came. And Texas won the game.

2 – David McCormack – McCormack’s value in this one showed most when he was sitting on the bench. KU simply had to have him out there, banged up, foul trouble, winded, whatever. He played physical, battled hard and put up 16 points and seven rebounds on 6-of-10 shooting. The missed free throw late was a blemish. As was him getting tied up by a smaller player after grabbing a defensive rebound late — which he got after falling to the floor and still getting up fast enough to go grab it, by the way. McCormack was the least of KU’s issues in this one and it’s too bad he didn’t get a chance to get the ball down one with the game on the line the way Self drew it up out of the timeout. Coming through there could’ve been massive for McCormack’s confidence. Still, he should feel good about his night, individually speaking, of course.

3 – Dajuan Harris Jr. – Give Harris credit for knocking in a couple of 3-pointers when Texas made it clear they were going to live with him shooting. But he needed seven shots to score his eight points. When you combine that with his two turnovers and zero steals, you’re looking at a pretty un-Harris-like, inefficient night. No turnover was bigger than the last one, which came with KU trailing by 1 in the final 10 seconds. But KU coach Bill Self said after the loss that he could live with Harris’ decision to drive it because he had made those plays before. It just wasn’t his night to make one and Texas had plenty to do with that.

4 – Christian Braun – The 5-of-8 shooting for 13 points part of his night was fine. The zero rebounds and 2-of-4 performance at the free throw line was not. Braun also dished just one assist to go along with two turnovers. He played 33 minutes and Self acknowledged after the loss that all of his starters needed a couple of days off. But Braun’s a gamer and we’ve seen him shine brightest in those super big moments so many times before. He didn’t quite do that in this one, and a couple of his miscues contributed to the outcome.

5 – Ochai Agbaji – Texas defended Agbaji in a way that forced someone else to beat them and, in terms of the end result, it worked. It wasn’t Agbaji’s fault that his numbers were pedestrian — 4-of-7 shooting for 11 points in 38 minutes. But the fact that he knew the Longhorns were taking him out of the game and yet he finished with zero assists made it a bit of a lower grade than normal kind of night for KU’s leading scorer. It’s one thing for teams to want to defend Kansas and Agbaji this way. It’s another for them to actually be able to do it. Credit UT’s Courtney Ramey for handling the assignment and expect Agbaji and the Jayhawks to go back to work in figuring out what to do the next time a team tries this strategy — or the next time they face Texas (March 5 at Allen Fieldhouse).

6 – Joe Yesufu – He played 14 minutes and contributed again — while looking comfortable at the same time — by hitting 3 of 4 shots including a huge steal and two-handed rim-rattler to give KU a two-point lead late. It’s amazing to think that a guy who appeared to be unplayable just a few weeks ago can have morphed into a key part of the KU rotation. At this point, he seems to be a better option than Coleman-Lands, both because of what he gives the team and because of where his confidence sits.

7 – Mitch Lightfoot – Most nights, Lightfoot is a very capable and reliable back-up for David McCormack, whenever the KU starter finds foul trouble or needs a breather. On this night, that was not the case. Lightfoot struggled to defend Texas’ post players and, as a result, played just 5:44 in the loss. He did draw a nice charge after getting clobbered by Mitchell along the baseline. And he grabbed two rebounds, as well. But he wasn’t out there long enough to do much and the reason he wasn’t was because he couldn’t do much in this matchup.

8 – KJ Adams – Adams, more than any player on this team, so often delivers in the first moments after checking in. He did so again on Monday night, hitting a shot shortly after hitting the floor. But his time was limited to 4:27, as he, like Lightfoot, offered very little resistance against UT’s Tre Mitchell in the post.

9 – Bobby Pettiford – Played just 39 seconds — late in the first half while KU was trying to survive having five players with two fouls — and wound up giving away a tough turnover that led to Marcus Carr’s buzzer-beating 3-pointer before halftime. That’s a tough spot for Pettiford to be tossed into, but he still has to be better than that when given his opportunity. A missed shot or a bad read would’ve been more tolerable than the turnover. But, again, this is a guy who has not had a ton of playing time because of injury and, therefore, can’t be expected to be perfect.

10 – Jalen Coleman-Lands – His stints were short and not so sweet over the 3:05 he played. His defense was an issue on Monday night and he was yanked another time after holding the ball too long in the corner, shot-faking and jab-stepping three times before turning it over. Not his night any way you slice it.

Kansas coach Bill Self on what cost the Jayhawks in 79-76 loss at Texas by KUsports.com

One quibble: you can't really say that Jalen missed two free throws when the last one was intentional. (Unfortunately, the miss before that was huge, of course, so maybe that should count as two by itself.)

Under Mitch Lightfoot's write-up, Matt, did you mean to write "McCormick struggled to defend..."?

Not sure why this doesn't show in the kudports.com feed. I have to "Google KU sports ratings" to find these excellent write-ups.

More time on the floor to mess up. That's one way to look at it anyway. I get what you're saying, but Bobby was only out there one time. And, yeah, he made a mistake in that time, but who knows what he would've done with more time or, conversely, who knows what mistakes could've been avoided if JCL played less time.

Splitting hairs, I know. Usually pretty tough to separate guys at the bottom of these.