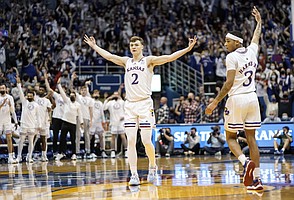 Kansas guard Christian Braun (2) and Kansas guard Dajuan Harris Jr. (3) celebrate a three-pointer by the Jayhawks during in first half on Saturday, Feb. 5, 2022 at Allen Fieldhouse. by Nick Krug

1 – Christian Braun – If you didn’t know any better, you’d have thought someone told Braun that the Jayhawks were playing Missouri on Saturday. Much like he did against the Tigers earlier this season, the KU junior came out with a major chip on his shoulder and looked to take great pleasure in making the Bears pay for it. He defended, tried to rip the rim off the backboard and got back to that attacking style that made him so hard to stop in late November and December. That led to 18 points on 8-of-14 shooting to go along with 10 rebounds, 3 assists and a steal. Braun also finished with a game-high 4 turnovers, but not one of them mattered because of the tone he set for Kansas and for the game and the rest of the production he delivered up and down the stat sheet. Other than the obvious lift from his energy, the best thing about Braun’s day was that he constantly looked to get others going and managed to get his in the process.

2 – Jalen Wilson – If Braun was the heartbeat and inner fire of the Jayhawks on Saturday, Wilson was the motor that made the Jayhawks go. And he was wildly efficient in the process. His numbers were great – 15 points, 7 rebounds, 4 assists and 2 steals in 29 minutes. But the way he attacked was worth more than all of those numbers combined. His relentless pushing of the pace led to a stellar afternoon in transition for Kansas and kept Baylor in retreat mode all afternoon. And then in the half-court, when he attacked both as a scorer and by going to the glass, he helped Kansas dictate the way the entire game was played. Wilson took a while to get going this season. But he has hit a stretch now where he has been consistently good for a long period of time. And, as I’ve written here before, it seems as if he’s still just getting better, too.

3 – Dajuan Harris Jr. – Seven assists, just two turnovers and, more important than either of those, a big zero next to James Akinjo’s name on the stat sheet. Harris made just 1 of 5 shots and finished with 2 points, but he delivered his third consecutive strong game by simply doing what the Jayhawks needed him to do. Against Kentucky, he was KU’s best player because he found a way to be both aggressive and effective on a day when the Wildcats bottled up the rest of his team. At Iowa State, he was far and away the Jayhawks’ best player, stepping up as a scorer and also leading the charge defensively and confidence-wise to make sure the Jayhawks won without Agbaji. And in this one, with Agbaji back, he put his emphasis on defending and made Akinjo miserable as a result. There’s something to like about this guy’s game every time out simply because he plays hard, he plays smart and he’s the ultimate team player. On those occasions when he puts everything together, he’s far more of a beast than his slight frame and quiet demeanor might have you believe.

4 – Ochai Agbaji – By far the most impressive part about Agbaji’s return to action was how aggressive he was in going after the basketball on the glass. He finished with 9 rebounds — all 9 on defense — and dropped 18 points on 5-of-11 after a one-game break because of COVID-19. He didn’t look winded or overly rusty. His outside shot took a minute to get dialed in, but that’ll happen when you don’t shoot a whole lot for most of the week. Regardless, he failed to let it take him out of the game and found a way to be pretty efficient and effective while playing a team-high 32 minutes.

5 – David McCormack – Scored 9 points and grabbed 8 rebounds, but, most importantly looked aggressive right out of the gate in going after the ball. McCormack couldn’t get his shot to fall in this one (just 1-of-6), but he hit 7 of 8 from the free throw line and grabbed four offensive boards. He’s laboring a little on that sore foot, and Kansas is going to have to do whatever it can to manage that injury the rest of the way. Because, even on a night when he didn’t exactly stand out, McCormack showed yet again how much he can bring to this team when he’s locked in and confident.

6 – Mitch Lightfoot – Add his totals (8 points and 5 rebounds) those of McCormack (9 points and 8 rebounds) and Self got awfully close to that magic mark of 20 & 12 from the 5 position. Lightfoot feasted on the Baylor big men with his jump hook and crafty skills inside, knocking in all four shots he attempted. He played 15 minutes and McCormack logged 21. This outing, minus the 1-of-6 shooting by McCormack, was about exactly what the Jayhawks need from the 5 spot night in and night out. And neither player had to do anything outrageous to accomplish it.

7 – Joe Yesufu – Playing as the first guard off the bench following his strong showing at Iowa State on Tuesday night, Yesufu looked more comfortable in this one — against a high-level opponent and tough guards, no less — than he had at any point this season. His numbers were irrelevant. He made just one shot — an early 3 — and didn’t record anything else on the stat sheet. But his defensive effort and that sense of belonging that he carried himself with both strengthened his case for more playing time moving forward. Came off the floor limping late, but KU coach Bill Self said he was fine.

8 – Jalen Coleman-Lands – Didn’t play until midway through second half and yet still found a way 8 points in 11 minutes on 4-of-5 shooting. The reason? He came in and played his part by shooting the ball when he was open. The two jumpers he knocked down after checking in forced Baylor to guard him and that allowed him to find room in the paint for a couple of easy layups a little later on. Coleman-Lands came to Kansas as a guy who can shoot the ball and Kansas has to love that he did exactly that, without hesitating, in this one.

9 – Bobby Pettiford – Played late and scored on a tough drive to the rim. At this point, though, Pettiford appears to be deep insurance at the lead guard position, behind Harris, Yesufu and, when he’s back, Remy Martin. That role should allow him time to fully heal from that abdominal injury. And don’t count out the idea of him finding a role down the stretch. If it comes, though, it will be pure luxury and less necessity.

10 – KJ Adams – Almost checked in late in the first half but was called back to the bench after KU got possession and had a chance to run a set play to close the half. After that, he didn’t get back in again until the game’s final minutes with the outcome long decided. Managed to make his presence felt with a couple of blocks, but he also turned it over via a shot-clock violation and was hardly a key part of the equation.

I find it encouraging that some of our freshmen and sophomores are performing so well at this point. Bodes well for the future.

In addition to the rankings, there aught to be a point value assigned to the performance, because one of the middle of the pack performances in this game is better than the top performances in a stinker game.

The collective 5 performance is nice, but cutting off the head, holding akinjo scoreless is priceless. Glad the lead trio recognized it in the post game.

As usual, awesome review and analysis.

Best game KU has played all year and perhaps in several years considering the opponent.