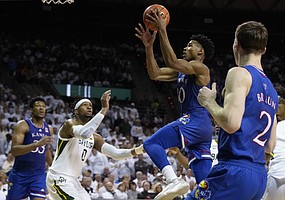 Kansas guard Ochai Agbaji, right, drives to the basket as Baylor forward Flo Thamba, left, looks on during the first half of an NCAA college basketball game Saturday, Feb. 26, 2022, in Waco, Texas. by Ray Carlin/Associated Press

1 – Ochai Agbaji – He shot just 8-for-22 and 4-for-14 from 3-point range, but he also damn near willed Kansas to victory. Constantly in attack mode, for better or worse, Agbaji made some big time plays and clutch shots, he just couldn’t make them all. His personal 7-0 run, following Bill Self’s technical foul, was as good of a stretch as he’s had all season. He got to the free throw line, hammered a vicious dunk and buried a deep 3-pointer. All of it halted Baylor’s momentum and, at least temporarily, put it back on the Kansas bench. Agbaji finished with 27 points and added six rebounds, three assists and a steal in 33 minutes. Looking back, sitting him for 7 minutes was probably too many. So he’s either going to have to play 38 minutes the rest of the way or KU is going to have to get better and more consistent production from its bench so that when he sits the drop off is not as drastic.

2 – Christian Braun – Braun finished with a double-double of 17 points and 10 rebounds in 38 minutes. He matched Baylor’s physicality and fought hard all night. But his two missed free throws — one on the front end of a one-and-one — were bigger than they appear on paper. Still, it’s hard to question Braun’s contributions in this one after he laid it all on the line. He seemed to play looser in the first half than the second, but it’s also easy to play looser with a double-digit lead.

3 – Dajuan Harris Jr. – He finished 0-for-6 on the night and missed a pair of wide open 3-pointers that would’ve been big at the time he shot them. But he still finished with 7 assists and just 1 turnover in 31 minutes. It was far from his best night and his poor shooting no doubt will continue to make opponents believe that leaving him open and daring him to beat them will be a good strategy. It’s up to Harris to make future opponents pay the way he made Missouri pay in the past. It did not happen in this one, but he still found a way to contribute, adding a block, a steal and four rebounds in his 31 minutes.

4 – David McCormack – McCormack struggled on defense but none of it was for lack of trying. He simply was facing tough guards and rough mismatches, having to chase down Baylor’s smaller 5 men. But give the guy credit for battling and for another big night on the boards. He added 13 rebounds to his 10 points in 31 minutes, with seven of them coming on the offensive glass. He looked better physically than he did earlier in the week, in KU’s win over K-State, but there’s little doubt that in a game like this one, all of that pounding his body has taken this season played some kind of role. Especially when you consider the hard fall he took early in this one when his legs were taken out from him on a rebounding attempt. Not a great night, but far from a terrible one. If not for the defenses issues, which were not entirely his fault, McCormack’s night would’ve been pretty solid.

5 – Jalen Wilson – Wilson couldn’t buy a shot in this one. He finished 2-of-10 overall and 0-for-5 from 3-point range in 38 minutes. That hurt not only his stat line and KU’s overall shooting but also his confidence and aggressive nature. He tried to attack at times, and it got him to the free throw line on a few occasions. But he didn’t find much luck turning the corner or pushing in transition and that seemed to take him out of his game entirely. I’m sure Wilson took Saturday’s loss hard and will be ready to bounce back with a much better showing when the Jayhawks play at TCU on Tuesday and home vs. TCU on Thursday. He’s been too good in recent weeks to think that he won’t get it back quickly.

6 – KJ Adams – Adams delivered a couple of big buckets in pressure situations and looked pretty good doing it. I’m sure it was easy for Kansas fans to daydream about him guarding BU’s Jeremy Sochan instead of McCormack, but the reality is Adams just isn’t quite ready for that role yet. Maybe in a do-or-die game, he’d get more of an opportunity. But this was not a do-or-die game. As much as the Jayhawks would’ve benefited from winning it, they had room to play with and margin for error. That has disappeared a little, but that fact only makes it less likely that Adams will have any type of sizable role the rest of the way. Still, he continues to stay ready and deserves to be commended for delivering with the minutes he does get.

7 – Remy Martin – Stop me if you’ve heard this one before. Martin was good on offense and bad on defense. That reality kept him to 11 minutes and also left Kansas searching for ways to cover his weaknesses on the defensive end. I can’t help but wonder if creating/developing some kind of automatic zone defense when Martin’s in the game would be a good idea. We know Self would hate it. And it might not work. Sometimes when bad defenders play in zones, they look even worse because the pride associated with trying to guard your man and keep him from embarrassing you does not hit quite as hard. But it makes sense for this team to want Martin out there for what he can do on offense. It’s just a question of how long can they handle it when they see what kinds of struggles he’s having on defense.

8 – Joe Yesufu – The return of Remy Martin significantly cut into Yesufu’s playing time and he looked like a guy who reverted back to the days of being uncomfortable in the 4 minutes he was out there. It’s worth remembering that this was his first experience in Waco. So it might not have been in the cards for him no matter what happened with Martin. But the Jayhawks have enjoyed his aggressive, attacking, athletic approach and they could have used it on Saturday. He has to figure out a way to stay valuable and relevant even with Martin back in the lineup.

9 – Zach Clemence – No stats in his 1 minute on the floor. Like Adams, Clemence one day will be a much bigger factor in a game like this, with athletes for days on the other side. But for a number of reasons, the coaching staff just doesn’t think now is that time. I get the idea of wanting to give him the opportunity to show that he can do it, but putting inexperienced freshmen out there in an environment like this one against a team like that one is a recipe for the Kansas deficit to grow to double digits like it did at the end much sooner. And in a tough road environment like this one, that’s awfully hard to come back from.

10 – Jalen Coleman-Lands – Played 4 minutes, missed a pair of shots and fouled once. The worst part? One of his misses came when he did the one thing that Self has continually tried to emphasize that he should not do — he put the ball on the deck and tried to create a shot off the dribble. Coleman-Lands is a catch-and-shoot guy. That is his biggest strength and that’s what the Jayhawks want him doing.

11 – Mitch Lightfoot – Four fouls and nothing else on the stat sheet. Not the best night for Mr. Lightfoot, who, because of his experience, heart and pride, could have helped KU a ton in this one, if he were just able to avoid fouling and go into scrap mode. Still, both of the guys Baylor played at the 5 in their small lineup were more athletic than Lightfoot and likely would have given him too much trouble to expect him to play a significant role in this one.

Kansas coach Bill Self reacts to the road loss at No. 10 Baylor by KUsports.com

KU guard Ochai Agbaji on a “lost opportunity” at Baylor by KUsports.com

There have been other games when JWil’s shot has been off, but he still found a way to contribute. He especially needs to step up when they play small.

Agreed It was tough to watch Baylor begin to claw back while the starters were out. The momentum switched, and we couldn't build a lead back. In a back and forth game, the advantage is with the home team. Give the crowd credit. It sounded loud even when they were down by 12 early.

It is bad news that our best player, and he was I agree, had a such a poor shooting night. At least he went 7/8 at the FT line.

Trying to cover for Remy on D, and he was horrible last night, sounds crazy. He has no idea at all some times. Like you said Matt, who knows if a zone would help him. He looks like a freshman playing his first game.

Maybe somebody should look at ASU game tapes and see how they covered for him on defense. If he was getting 15-20 points a game maybe we could live with wide open shooters, maybe. I think he throws off our whole defense when he is in the game.

Baylor was lousy shooting outside shots - so the Bears drove into the paint without much resistance. Looked like KU’s pitiful defensive performance against Texas Tech in Lubbock...The Kansas guards just aren’t capable of stopping that.

Accurate individual review Matt. I've posted it before and that has to do with the effort McCormack puts out in spite of some of his shortcomings. It was one of the biggest takeaways from the 2 games we saw when returning to Allen earlier in the month. I watched him up close from courtside seats and you could feel the energy and intensity as well was see it. He is relentless non stop, obviously sometimes to a fault. lf every one of our players played with that much intensity consistently, we'd be super tough to beat.
And that is the key for this team. BE CONSISTENTLY YOUR BEST