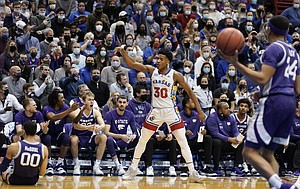 Kansas guard Ochai Agbaji (30) signals a made three and a foul on Kansas State guard Mike McGuirl (00) during the first half on Tuesday, Feb. 22, 2022 at Allen Fieldhouse. by Nick Krug

1 – Ochai Agbaji – Kansas coach Bill Self alluded to Agbaji being in “attack mode” after Tuesday’s win and that’s the absolute perfect way to put it. It’s not that Agbaji’s a lion on the hunt as much as he is a monster of efficiency. He takes good shots, makes sure he can let his mechanics work to his advantage and has such a good feel for his game and his teammates that everything looks smooth and easy while being extremely effective. He has displayed more of a killer instinct than ever before, but even that does not take him out of his optimum efficiency. In short, he’s playing like a player of the year candidate and an All-American. He’s a lock to win the honor in the Big 12 and probably a lock as a first-team All-American. In this one, he finished with 23 points on 9-of-13 shooting — 4-of-6 from 3-point range — and added 7 rebounds and 5 assists in 35 minutes. With numbers like that, who cares about the 5 turnovers, especially for a guy who touches the ball so much in a game with as many possessions as this one had.

2 – Christian Braun – So good again to start the second half, when he scored 9 of KU’s first 14 points. Don’t spend too much time celebrating that with Braun, though. He’ll be the first to tell you that what he did in the second half was what he was supposed to do and that he should’ve played better in the first half. Agbaji called it “balance,” and Braun’s numbers show plenty of that. 20 points on 8-of-12 shooting with 7 rebounds, 5 assists and 2 steals. None of those mean nearly as much as the fire and ignition-switch energy that Braun brings to KU when they need it the most.

3 – Jalen Wilson – Tuesday was one of those nights when Wilson’s shot was falling and he felt like enjoying that for a while. His 4 rebounds and zero assists are both lower than normal, but his 7-of-9 shooting and 3-for-4 clip from 3-point range was a product of a terrific offensive night for the Jayhawks. The fact that Wilson showed this kind of night will only make him more dangerous moving forward. People have known he can shoot, but if he can shoot it like this — or at least be a threat to do so — that’s going to make him even more dangerous off the dribble.

4 – Mitch Lightfoot – Self called Lightfoot part of KU’s four-headed monster, so fourth in the rankings sounds like a good spot for him. The numbers show he belongs. He finished with 13 points on 6-of-7 shooting and was a key option inside on a night when David McCormack didn’t have it. Heard that one before? That’s because that is the Mitch Lightfoot experience. Like it or hate it, he’s always going to be ready to go and more times than not he’s going to produce. Tuesday was one of those nights. But he won’t spend another second thinking about it. With Lightfoot, both in his mind and in the eyes of the Kansas coaches, you’re only as good as your next one.

5 – Dajuan Harris Jr. – Harris made three shots all night and all three of them were really tough floaters. He needed to see those go again and when they did that opened him up to play his game. That showed, too, as he finished with 7 assists and 2 turnovers to go along with one steal in 27 minutes. Harris moved well and attacked with a purpose in this one and it looked lik Kansas State respected him as a scorer. That made him more dangerous as a creator, but probably didn’t hurt anything in terms of his confidence in his own offense.

6 – Jalen Coleman-Lands – Call me crazy, but I loved JCL’s night. Big surprise, right? The guy made all three 3-pointers he took and finished with 9 points in 13 minutes. But it wasn’t just the results that I liked. It was the fact that he looked more confident in getting them than I’ve seen in a while. If he can find more of that in the weeks ahead, he’ll be a legit weapon for the Jayhawks in the postseason. He’s not quite to the level Isaiah Moss was at a couple of years ago because he’s not the same type of defender. But he can be the same kind of instant offense and this Kansas team, which isn’t elite defensively anyway, will take all of that it can get.

7 – Joe Yesufu – With Remy Martin out again and time winding down on the seaons, Yesufu got another opportunity — albeit in small doses — to play point guard for the Jayhawks and looked pretty good doing it. The funny thing about plugging Yesufu in as the lead guard at times is that it seems to have unlocked his aggressiveness. He made 3 of 5 shots, 2 of 4 from 3-point range and attacked hard whenever he found a crease. As long as he does all of that in the right spots and without taking opportunities away from his teammates (which he won’t), he, too, stands to have a strong finish and could be a huge factor down the stretch.

8 – David McCormack – Self said after the game that McCormack’s foot was sore on Tuesday and it certainly appeared as if something was off. He made just 2-of-6 shots, missed a couple of absolute bunnies and grabbed just three rebounds overall. The pace of the game didn’t help him much, and K-State might have wanted it that way. McCormack killed the Cats on the offensive glass in Manhattan and getting up and down all night made it less likely that a similar thing would happen in this one. He played 19 minutes but didn’t have much to show for it — 5 points, 2 assists, a steal and a turnover on 2-of-6 shooting. They’ll need much more than this from him in Waco, Texas, this weekend.

9 – Zach Clemence – Got in in the first half but didn’t do much. Played just 4:37 overall and missed his only shot while grabbing two rebounds and a steal. His emergence in recent weeks has been good to see and important at times, but this is still a guy who missed a month and is just a freshman. No need to expect major minutes out of him any time soon, whether he can handle them or not.

10 – KJ Adams – Adams played just the final 2:45 and logged a missed free throw, an assist and a turnover. None of it mattered in terms of real evaluation, though, because the game was over and the time on the floor was limited. He has prided himself on staying ready and will continue to do so. The question is how much will he be needed?

Fair points, for sure. I put Ochai ahead of CB because I thought he was more consistent with his efficiency. Ochai had two good halves. Braun, I thought, had just one. But, yeah, definitely good numbers across the board for a lot of guys last night.

Agree Mike. I get OA is the face of the team, but Braun had the better overall game.

Matt just an idea here - Maybe a better way to rank how the players, have you ever tried A, B, C, D? They do this in Football/Soccer and it takes into account that more than 1 player was key in the game.

For example Braun A+, OA A or A- only because of the turnovers.

Again just an idea. Not sure anyone pays attention to the standings.

I've considered it, but that gets really tricky with those guys who only get 2-5 minutes like Clemence and Adams last night.

You could probably get away with letter grades for the top 5 or 6 guys, but after that it gets watered down pretty quickly.

Thanks for the idea, though. The rankings have always been fun to track even if they don't mean much. For instance, a few notables from where things stand today:

• Remy's still ahead of every other bench performer not named Mitch Lightfoot???? Crazy to think. Shows his value when he was playing.

• Ochai and CB have clearly separated themselves from the rest. You probably knew that from watching, but this gives an indication of just how much.

• Speaking of Lightfoot, the guy people love to rip, he's clearly in the No. 6 position and not all that far behind McCormack, despite having played 235 fewer minutes so far this season.

I also think it's been fun to watch guys rise in the rankings like Yesufu has this season or the way Jalen Wilson has after starting in a 3-game hole.

Anyway, you get the point. They're fun and obviously just one man's opinion.

Going into the game I thought that it might be Zach Clemence’s time to shine. Instead, he had the deer-in-the-headlights look.

Great to see Zach, KJ, JCL and Joe get minutes, and for the latter pair to be productive. Didn’t it also take Moss a while to settle in to being productive? That team did have quite a bit more defensive leadership.

Good to point out the limited time Zach has had, though it’s almost the same for KJ, and even JCL and Joe. KJ didn’t miss a month, and JCL and Joe aren’t freshmen, but they all have only been learning “all the little things” from Coach for a relatively short period of time.

The important thing is they are learning and it’s fantastic to see them develop. At least for on night the sky is not falling.

How can anyone hate on Mitch Lightfoot? The guy has bled KU his entire career. He’s done exactly what was asked of him from the coaching staff. He’s been one of my all-time favorite players because of his blue collar mentality. He isn’t always flashy but he always comes to work. He does his best with the minutes he gets and honestly, coach trusts his play, and for good reason. He may not be a scoring machine but he does what he needs to do get the job done. And this isn’t saying he was #1 I just love ML and think he is very underrated as to what he contributes to the team. Always love watching his minutes to see what he will bring. He may not be our best player but he brings his lunch pail everyday and goes to work.

Chris - Coach was hating him going into halftime (2 shot foul with 2 seconds on the clock) but I get what you’re saying. Mitch is so thoroughly a Jayhawk.

Matt - I would propose a change similar to what Rodney is talking about but keeping it numeric so you can total the scores. Instead of it being first (10), second (9), …you’d assigned points based on performance. That would mean Ochai and CB could both get 10 points, or conversely nobody gets 10 when losing to the Topeka ymca. Then, it’s also not a perception of Zach and KJ failing as much as it just that they didn’t contribute much. Still quantifiable over the course of the season.

It might make it a bit tougher to create a scoring standard, but it’s been done before. You could probably even turn it into a commenter assisted project during the quiet summer days. Each point category could have guidelines and examples.

Or like in some of the subjective Olympic sports, there would be deductions for things like turnovers.

If you really wanted to get nerdy, you could even include a difficulty factor to the score based on the quality of the opponent (based on the tiers/groups used for evaluating W&L prior to the Madness).

I love this. Heck, I'd love to be part of a team creating this system! Great ideas, Dirk!