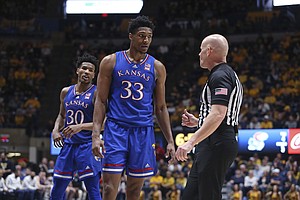 Kansas forward David McCormack (33) and guard Ochai Agbaji (30) speak with an official during the first half of the team's NCAA college basketball game against West Virginia in Morgantown, W.Va., Saturday, Feb. 19, 2022. by Kathleen Batten/Associated Press

1 – Ochai Agbaji – For a while, it looked like Agbaji might be headed toward a 30-point night and it wasn’t necessarily because he shot lights out or was even the player that Kansas was running everything through. There were times that that was the case, of course. And he did finish with 23 points. But he seemed to hit big shot after big shot even without you really realizing just how big each shot was. The biggest that I can remember came after WVU had just cut the Kansas lead to three and, less than 15 seconds later, Agbaji pushed it back to six with a smooth triple from the wing. He shot 8-of-15 overall, 3-of-6 from 3-point range and, most importantly, was 4-for-4 at the free throw line. He’s had better games. He’s had louder games. But after seeing opponents try to suffocate him in recent weeks, it probably was super refreshing for Agbaji to find himself getting free again, both on the perimeter and on his way to the basket. He made sure that freedom counted, too.

2 – David McCormack – McCormack’s double-double of 19 points and 11 rebounds seemed even bigger than that. That’s probably because a handful of those buckets and rebounds came in the absolute most clutch moments of the game. His and-one bucket late that started on the left block and finished on the right side showed off his footwork and fighting spirit. Had he not missed the free throw, it might’ve been the highlight play of the game. But it was still a big bucket at a big moment and McCormack played big — in terms of being clutch and his physical size — throughout Saturday’s victory. Kansas coach Bill Self called him “great” and you know Self doesn’t just throw words like that around for average or even good performances. It remains to be seen if McCormack can consistently play this way throughout the remainder of the season. But the confidence is there and he appears to be playing hard and being effective pretty much every time out right now.

3 – Jalen Wilson – How about this: Wilson shot just 1-for-5 from the floor and yet still finished with a massive double-double that helped Kansas win a tough road game. The reason? He attacked the defensive glass and was willing to mix it up with whoever, whenever, to preserve another possession for the Jayhawks. And he made 8 of 9 free throw attempts on a night when Kansas very well may have won the game at the free throw line, going 18-of-22. One of the most overlooked aspects of Wilson’s line, which included just one steal, one turnover and zero assists, was the five shot attempts. On a night he wasn’t hitting, he didn’t try to force it to the detriment of his team. Instead, he tried to get downhill, attacked the rim and forced WVU to foul him. And then he made him pay with the easiest shots on the floor.

4 – Joe Yesufu – Another solid night for the guy that Self keeps insisting is not a point guard. That fact made Yesufu’s contributions on Saturday night that much more important. With Dajuan Harris Jr. battling cramps in the second half and generally not all that effective overall, Yesufu filled it at the point and kept the show rolling. His numbers won’t wow you. And he probably didn’t look to score off the drive as much as he still can and should. But he made some of the game’s biggest plays — none bigger than that steal and free layup that put KU up 48-43 — and he was ready to be exactly what Kansas needed him to be when it mattered most — steady.

5 – Christian Braun – Braun was one point shy of a double-double himself, finishing with nine points and 11 rebounds, but this was far from his best game. He shot 4-of-9 from the floor, missed his only two 3-point attempts and also, uncharacteristically, turned it over a game-high five times. He should get credit for his defensive effort on Sean McNeil (a tough assignment) and he played 35 minutes, meaning that most of the good things Kansas did came with him on the floor.

6 – Dajuan Harris Jr. – Four fouls, a 1-for-4 shooting performance and a couple of iffy turnovers made this a pretty rough game for Harris, who still played 33 minutes while battling through cramping in the second half. It’s not like he was terrible. He dished four assists and swiped a couple of steals. But the WVU pressure and the intensity of playing in WVU Coliseum seemed to speed him up and force him out of his game a little. He’ll be back. I don’t think anyone’s worried about that.

7 – Jalen Coleman-Lands – Returning from a one-game absence with that migraine headache that kept him out of Monday’s home win, Coleman-Lands returned to the floor and played a pretty big role, even if it was in limited minutes. He made one shot early — an easy, rhythm jumper at the free throw line after picking up a loose ball — for his only two points of the night and had a nice chase-down block of Taz Sherman that sparked a Kansas fastbreak opportunity. Nothing flashy. Nothing spectacular. But he was out there and contributing during KU’s 11-0 run that turned a 9-all game into a 20-9 Kansas lead and set the tone for the rest of the night, with WVU chasing and never catching up.

8 – Mitch Lightfoot – Back in his regular role of primary backup to Big Dave, Lightfoot logged 13:24 and grabbed three rebounds and a bucket. He wasn’t great. He turned it over a couple times, including once with an illegal screen. But it was his experience that Self trusted and went with to help guide Kansas to one of those rare and tough wins in West Virginia and KU left the building with a 13-point victory. Hard to be too critical of what anyone did after that result.

9 – KJ Adams – Played just 19 seconds at the end of the first half and checked in to ensure that McCormack did not pick up a cheap foul right before halftime. Neither Adams nor Zach Clemence played other than that, further illustrating how much Self valued experience over anything in this one.