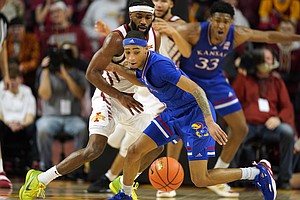 1 – Dajuan Harris Jr. – Kansas coach Bill Self said after Tuesday’s win that the outing by his sophomore point guard might have been his best of the season. It was. And it might’ve been the best of his career. It wasn’t just the numbers — 14 points, 6-of-8 shooting, 8 assists and 3 steals — as much as it was the degree of difficulty with which he got those numbers. He played basically the whole game. He hit some shots that Self described as “ridiculously tough” and played with an assertive edge, especially on offense. It came on a night when the team played with Ochai Agbaji (COVID) and needed someone to take charge. Credit to him for doing it so well and in such a hostile environment.

2 – David McCormack – The KU big man made all 7 shots he attempted and scored 14 points while grabbing 14 rebounds. He wasn’t exactly unstoppable Dave the way we saw him play at various points during Big 12 play last season. But he was super effective Dave and he played with great energy, effort and tenacity. Some of it, no doubt, had to do with Agbaji being out. The rest of it was surely a response to the way he played against Kentucky. The big question now is, can he sustain it from here?

3 – Jalen Wilson – Wilson was under the microscope in this one, with someone — or some people — needing to step up to offset the loss of Agbaji. Wilson’s track record and confidence made him an easy choice. And, for the most part, he did. He wasn’t perfect. He did turn it over five times. But the rest of his line was pretty great. Thirteen points on 5-of-8 shooting. Six rebounds. Four assists. Two steals. Thirty-six minutes. More than any of the numbers was the way he stayed in attack mode all night. Not just in transition and not just on offense. He played hard and with passion all night and showed, through that play, that Kansas still had enough to come away with a win.

4 – Joe Yesufu – Arguably the biggest single surprise of the season to date, Yesufu’s monster effort in 23 minutes off the bench included 7 points, 5 rebounds, 4 assists and 3 steals, all of which Kansas needed to grab the win. Self said after the game that it’s now clear to him that Yesufu needs to play more. Will he? With both Agbaji and Remy Martin out, playing Yesufu 23 minutes was easier Tuesday than it will be when those two are back. But even if he can become a reliable option for 12 or so minutes per game, funcitioning as the type of change-of-pace player who can quickly impact a game, Yesufu’s development and growth — if it continues — could wind up being pretty big for this team down the stretch.

5 – Christian Braun – If you’d have told me before the game that Braun would shoot 5-of-13 from the floor and make just one 3-pointer, I probably would’ve predicted a KU loss. It seemed, going in, that he needed to be better than that, production-wise. But others stepped up to handle that part and all Braun had to do was be out there. He only had 3 rebounds and 1 assist and also turned it over 3 times. He’s had much better games. But he played 37 minutes on a night Kansas never trailed, so the math there says he was solid even if the numbers fall short of expectations. I’d call him solid in timely spots.

6 – Jalen Coleman-Lands – For a few minutes in the first half, it looked as if Coleman-Lands might light his old team up and come through for Kansas in a huge way. And while his two 3-pointers early were big in terms of getting KU going, his minutes from there were limited, partly because of an injured left hand after getting called for a charge and partly because of Yesufu’s emergence. Still, JCL did what KU brought him to Lawrence to do — knocked down a couple of 3-pointers in a few valuable minutes. That role, no matter how big or small the number in his minutes played column gets, will be important the rest of the way.

7 – Bobby Pettiford – Pettiford’s getting closer and he was the first guard off the bench in this one. It also just wasn’t his night. His stats were non-existent and a couple of bad turnovers got him a quick leash. He played just 5 minutes but showed flashes in that time of being at least a little more comfortable out there. Not he needs to be more efficient and execute better. It’ll come. Largely because he wants it so badly and also because Self figures to keep giving him chances.

8 – Mitch Lightfoot – His lone bucket late was pretty important at the time, helping to keep Iowa State at arm’s length and eliminating any hopes the Cyclones might’ve had of a comeback. Lightfoot wasn’t quite his normal self in this one, though. He had just 1 rebound in 8 minutes and was pulled rather quickly after a couple of mistakes, including a moving screen that he immediately protested which Self then quickly explained, yep; you did it.

9 – KJ Adams – After starting at the 5 against the Cyclones in the first meeting and KU being short-handed in this one, it seemed like Adams could find some more minutes than he did. But he played just 5 minutes and produced very little while he was out there. With McCormack playing so well and the Jayhawks not wanting to go with two bigs against the smaller ISU lineup, Adams was the odd man out on this night.

Hopefully Joe can be the 3rd ball handler when Remy gets back so that he and Juan don’t need to play basically the entire game. Glad to see some things click to build his confidence.

Overall we need the same intensity even when we get back to full strength.

Glad to see DMac come through. He plays poor, we lose.

Whew! I had trepidations about this game, given the KU played terrible against Kentucky and Ochai being not available. Also, the Jayhawks have recently been pretty bad during the first halves of their games, and this game was at Hilton. I've always hated KU games in Ames, ever since KU lost all four there when Danny Manning played.

But KU played well enough the first half to lead by six points (even though they were sloppy with 16 turnovers). Then they kept on playing well, and won pretty easily.

I liked that Self finally gave Yesufu some time and he played well.