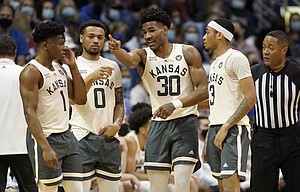 Kansas guard Ochai Agbaji (30) directs the other guards during a break in action in the first half on Monday, Feb. 14, 2022 at Allen Fieldhouse. by Nick Krug

1 – Ochai Agbaji – You could look at Agbaji’s 9-of-10 showing at the free throw line and say that was good enough for him to land on top of the ratings after this one given KU’s recent struggles at the free throw line. And then you’d see that he had 20 points, seven rebounds, four assists and three steals and realize he did plenty more to earn this perch. Agbaji continues to be all things for this team and he’s starting to get comfortable with teams trying to take him away. The funny thing about his night on Monday was that he never looked all that smooth doing any of it. That’s a bad sign for KU’s future opponents.

2 – Dajuan Harris Jr. – Harris scored and was aggressive as a scorer and that was big for Kansas. Things open up so much more when he’s looking to shoot the ball, which he did nine times, making five of them. The beauty about Harris’ game is that he doesn’t shoot just to shoot. He’ll take good shots. He’ll take open shots. And he’ll take necessary shots. But he’s not going to take shots just to shoot them. He still prefers to set the table for his teammates and he’s starting to become a menace defensively. At one point, after OSU big man Moussa Cisse grabbed a loose ball and started dribbling with it, Harris purposely avoided going to guard him, knowing that Cisse would want to give the ball up quickly. As soon as he did, Harris pounced and stole a possession for the Jayhawks, one of his two steals on the night. It was a thing of beauty, baiting at its finest.

3 – David McCormack – McCormack showed once again that as long as he’s active, he can be productive. Aggressive from the jump on the offensive and defensive glass, McCormack made a 4-of-10 shooting night seem acceptable simply because he got five offensive rebounds in the process. He finished with 12 points and 12 boards in 28 minutes and those are numbers you’ll take pretty much every time out.

4 – Christian Braun – CB delivered a couple of vicious dunks and he, too, was better at the free throw line, knocking in four of his six attempts. He didn’t shoot the ball great — 5-of-13 overall and 2-of-7 from 3-point range — and hasn’t found the same success attacking off the dribble against Big 12 foes as he did in the non-conference season. But he continues to scrap and grind and find a way to put up numbers. He finished with 16 points and four boards in this one in 36 minutes.

5 – Jalen Wilson – The reigning Big 12 player of the week shot just 4-of-11 from the floor and 1-of-3 from 3-point range, a bit of an off night offensively. But most of that came because of his outside shot. He was still really solid going downhill and attacking the rim. Wilson finished with 11 points and 7 rebounds in 25:18, less playing time than normal because of a little foul trouble. Put another seven or eight minutes on Wilson’s PT chart and you’re probably looking at another double-double.

6 – Zach Clemence – He was the first big man off the bench in both halves and he delivered a pretty solid encore to his breakout performance last weekend. KU coach Bill Self called him “active,” stopping short of saying he was that good but also not saying he was in any way bad. Just active. That activity led to 2 points and 6 rebounds — 3 offensive — to go along with two assists, two blocks and darn near half a dozen true hustle plays. Call me crazy, but it feels like the start of something big is upon us. Clemence may never get 25 minutes a game, but he could be playing his way into a very important role for this team moving forward.

7 – Joe Yesufu – Don’t look at the numbers like 1-of-4 shooting or 0-of-2 at the free throw line or one rebound or one assist. Look at the fact that he played 22:29 and was trusted to be out there that long. That’s what matters most for Yesufu right now. And it should come as no surprise given the fact that several Jayhawks talked repeatedly about needing to match OSU’s athleticism. Yesufu can and did do that.

8 – Bobby Pettiford – Played just one minute but looked solid in that time and dished an important assist to David McCormack late in the shot clock for a bucket. The poise of the freshman to get the ball to right spot was only surpassed by McCormack’s ability to drain the shot. It’s nothing to write home about, but in a game like this — after some of the outings Pettiford has had of late — it was enough to bump him up a few spots on this list.

9 – Mitch Lightfoot – Lightfoot surrendered minutes to Clemence in this one and may do so a little more often moving forward. He played just 2:52 and grabbed one rebound while not recording another stat. We’ve written this over and over in this space, but the great thing about Lightfoot is that no matter how much he plays or doesn’t play, who plays ahead of him or what’s going on with the team, you know he’s going to be prepared to do his job when asked to do it. There’s value in that. And even if it means he plays a little less because Clemence plays a little more, you can count on Lightfoot being one of the first guys to help Clemence be prepared for whatever role awaits.

10 – KJ Adams – It looks like we’re into spot duty time for Adams. He’s still capable of playing a bigger role at any given moment, but it’s no longer a lock to happen. Matchups will determine some of it and so with the play of a few of his teammates. Adams will be ready for whatever comes his way and you’ve already seen that he’s happy to go all-out whenever he gets in there. In this one, that wasn’t much, just 2:33 during mop-up time, which led to zero stats.

¢ -- Missed 1 game because of a migraine headache

Kansas coach Bill Self on KU’s 76-62 win over Oklahoma State by KUsports.com

“The funny thing about his night on Monday was that he (Ochai) never looked all that smooth doing any of it. That’s a bad!”

It won’t be a “bad” if Ochai continues to be challenged by Self and company to take his game up a notch and continue to kick in 20+ ppg. If he succeeds, his prominence on the national scene will grow further! Moreover, given the improvement of Jalen and Dave, and the prospect of high level play from a healthy Remy, Yesufu, Clemence, and the old standby, Lightfoot, the Jayhawks can have a good run this March.

Hmmm. Maybe you missed something? It says "that's a bad sign for KU's future opponents," meaning, even on a night when Agbaji didn't shoot it great, he was spectacular, getting 20 points, filling up the stat sheet elsewhere and opening up things for his teammates...

I humbly stand corrected Matt. Other than the “bad” part of my comment, I still stand by the remainder of my statement.

Are we ever going to see Remy Martin again? I’m beginning to wonder.

I've still got it at next Tuesday vs. K-State. Think you give him the rest of this week to rest/heal and hope he can start fresh on Sunday and Monday while preparing to play Tuesday vs. the Cats.

"was better at the free throw line, knocking in four of his six attempts." i am older but growing up and shooting 67% (effectively a D grade wise) would have earned me a lot of running during and after practice--especially as guard.