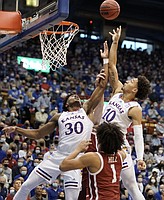 Kansas forward Jalen Wilson (10) gets a put-back bucket over Oklahoma forward Jalen Hill (1) during the first half on Saturday, Feb. 12, 2022 at Allen Fieldhouse. At left is Kansas guard Ochai Agbaji (30). by Nick Krug

1 – Jalen Wilson – Wilson’s on an absolute tear right now and it continued against the Sooners, really showing up in the second half. He’s been so good in transition, but equally good attacking the paint off the wing. He uses his dribble and his body in the paint to carve out angles and space to hit shots in tight. All of that has led to a smoother performance with the jumper, too. Wilson looks a lot like the Wilson who was so big for KU throughout last season. He continues to say that the switch flipped when he started caring more about his team and the greater good than his own numbers, and there’s no reason to think he’ll change gears away from that any time soon.

2 – Christian Braun – If we would’ve written these after the first half, Braun would’ve been down near the bottom. As Self said after the game, the KU junior was a non-factor in the first half and barely even drew your attention for any reason while KU struggled to a 34-31 halftime deficit. That all changed dramatically in the first 5 minutes of the second half, when Braun went wild, brought life to the Kansas side and helped the Jayhawks assert themselves and their style on the Sooners. Self said Braun was “terrific” in the second half and that might not even be a strong enough evaluation. One possibly overlooked highlight that Braun delivered came when teammate Ochai Agbaji was headed to the free throw line after a hard fall. With Agbaji grabbing his right wrist and his left knee, Braun went to a knee and took his sweet time tying his shoes. The impromptu shoe-tying session — full bunny ears on both shoes — gave Agbaji a little extra time to gather himself before stepping to the line for a pair of free throws.

3 – Zach Clemence – In his first game in a month, Clemence was good on offense, great on defense and even brought a spark of energy that the Jayhawks really needed. You can’t ask for much more than that for his confidence after such a long layoff. And those who know Clemence know that confidence is really not an issue in the first place. Still, he was sound and spectacular all rolled into one and he helped KU pull out a crucial home win in the league race.

4 – Dajuan Harris Jr. – Played 39 minutes, made 3 of 4 shots and dished 3 assists to go along with 2 steals. He hit some big shots and had some decent moments on both ends, but nothing crazy stood out. Still, playing 39 minutes is a feat in and of itself, so Harris deserves a tip of the hat for helping KU grind out a win.

5 – Ochai Agbaji – A season-low for Agbaji in the KU Sports Rankings, coming largely because of his 3-of-12 shooting performance. Agbaji is being guarded different and harder than he has been guarded at any point this season and he’ll need a little time to adjust. It’ll come. He’s too good for it not to. And he still played 38 minutes and fought for everything he got. He would benefit most right now from some rest, but it’s hard to imagine KU finding a way to get him much of that in the games ahead as this thing tracks down to the wire.

6 – David McCormack – It looked so promising early on. McCormack had the ball force-fed to him and he scored 7 points and was incredibly active early. That was on offense. On defense, he never found his footing and was constantly subbed out in search of someone who could stay closer to OU’s Tanner Groves on the pick-and-pop 3s. Self said he would’ve liked to get more from McCormack, given how much of an emphasis KU put on him early in the game. But he also said McCormack was fine, meaning you win some, you lose some, on to the next one.

7 – KJ Adams – Like all of KU’s big men not named Clemence, Adams also struggled to defend OU’s Tanner Groves. But he did enough elsewhere to justify a little higher ranking than some of his bench mates, most notably playing solid defense at game point after switching onto guard Jordan Goldwire with the Jayhawks leading by two.

8 – Mitch Lightfoot – By far his biggest contribution was a monster block that helped inject some life into the Jayhawks. Other than that, he struggled to guard Groves inside and out and was yanked quickly a couple of times as a result. Nothing to see here with Lightfoot. He’ll put this one behind him quickly and not think twice about it other than to search for ways he can get better.

9 – Jalen Coleman-Lands – Finished one spot ahead of Yesufu for one reason — he didn’t make any obvious mistakes. He also didn’t do anything to write home about, failing to record a single stat in just under 5 minutes of action. Sometimes, though, no stats in those areas like turnovers and missed shots (particularly free throws) aren’t the worst thing when you’re a role player. Still, Self said this week that KU still needs more from its bench and JCL needs to be a guy who can be a part of that solution. At least until Remy Martin returns.

10 – Joe Yesufu – Played just 3:54 and didn’t do anything to earn more minutes. Missed his only shot — it wasn’t a bad look or decision — and also fouled once and turned it over once. Not the game anyone was looking for from Yesufu. But the biggest question now is simple: Does his confidence dip as a result of this or can he brush it off and continue his late-season surge?

Great write up as usual.

Thank you Jalen and Christian. Except for some FT misses, great job. Way to be aggressive.

Zach, welcome to this player rating level. Keep it up! We need you.

Mitch should get some love for the body blow he took from Tanner. I bet he wakes up tomorrow remembering it vividly. It looks like that’s also Tanner’s hand grabbing onto Ochai’s arm in the photo.

Was Adams' defense really that solid on Goldwire. I mean he got an open ten-footer; he just missed it.

For a guy who has spent a lot of the year playing the 5 to guard a jet-quick guard like that and not let him go right by him? I'll call it solid. Self did, as well.

Did anybody happen to notice that Umoja Gibson - the Umoja Gibson who torched Texas Tech for THIRTY POINTS a few days ago - was held scoreless because of Harris’ defense? That was outstanding defense! Without it, KU was going to lose this one. The Hawks were listless.

i did, but then I don't think enough people fully understand his value to this team. He's just a sophomore. He has time to figure out how to improve his weaknesses. His potential is there. By the time he's a senior he'll be a star for us.

I hope Agbaji figures it out but I have to believe that what he is going through now is kind of like what he'll see in the NBA. He will have to figure out how to deal with changes in how he is defended, among other things. So, if he can get this figured out it bodes well not only for KU but for his NBA future.

Robert - Mo also fouled out of the game.

Dale - While I believe Ochai has a place in the nba I doubt that he will be the focal point of an O, so he’ll likely never see the same concentration of D again, though there’s still plenty to learn.

Though some complain that Coach is unwilling to change but it seems to me that he has morphed quite a bit. He’s commented recently about the inability of the bigs to set reasonable screens (first iteration) so my guess is that they’re working on a new wrinkle. The question becomes how long does it take the players to learn.