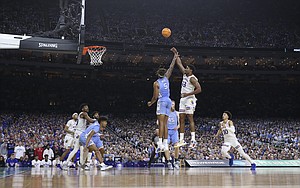 Kansas forward David McCormack (33) turns for a shot over North Carolina forward Armando Bacot (5) during the second half of the NCAA National Championship game on Monday, April 4, 2022 at Caesars Superdome in New Orleans. by Nick Krug

It took a little while to get to because there were so many other things to write after this one. But here is your final edition of The KU Sports Ratings for the 2021-22 season. Keep an eye out for something special and kind of unique to recap these rankings in the days/weeks ahead.

1 – David McCormack – The one thing that demonstrated McCormack’s value in this game better than anything else was incredibly simple to see. When he was on the floor, the Jayhawks looked like they had a chance. When he wasn’t, they didn’t. McCormack finished with 15 points and 10 tough rebounds in just 29 minutes of action while fighting through foul trouble. It’s been a long road for Big Dave, full of somem pretty high highs and quite a few lows, as well. But if this is the end of his time at Kansas — and there’s no reason to think it isn’t — he ended on about as high of a note as a player possibly could’ve. One of the more overlooked elements of McCormack’s performance on Monday was the tone he set by diving on the floor for the loose ball on one of UNC’s first few possessions. That set the tone for the game, and even though McCormack and the Jayhawks labored hard after that, it was clear, through McCormack’s actions, that KU’s top players were planning to bring their best in this one.

2 – Christian Braun – You can talk about his defense on the final possession or the passion he brings this team most nights. But by far his biggest contribution to KU winning the national championship game was the way he attacked to open the second half. By imposing his will on the Tar Heels and then screaming about it a little afterwards, Braun brought new hope and belief to the Kansas bench and the rest of the team fed off of his energy and confidence. His final line for the final game of the season registered 12 points, 12 rebounds, 3 assists and just one turnover, all while playing the entire 40 minutes.

3 – Dajuan Harris Jr. – If his teammates said Harris was the one who keyed the second-half surge that got Kansas back into the game, it's hard not to imagine there’s some validity to that. His 3 steals and 3 assists in 27 minutes helped offset the four turnovers and 1-of-5 shooting. And the best part about most of those steals was the fact that they came in clutch fashion and crucial points in the game. Harris was terrific offensively in the semifinal win over Villanova. And he was equally as good as that on defense in the second half when the Jayhawks absolutely had to have it.

4 – Remy Martin – It was close between Martin and Wilson for the four spot in the final rankings of the season, but 4-of-6 shooting from 3-point range is pretty ridiculous in a national championship game. Remy took some huge shots in clutch moments and delivered each time. He finished with 14 points on 5-of-9 shooting in 21:19 of playing time. In many ways, it was the perfect snapshot of the types of games Martin delivered when he was finally healthy and the season was on the line.

5 – Jalen Wilson – He didn’t shoot the ball great — just 5-of-13 for the game and 26% from 3-point range for the season — but he did catch fever from Braun’s way of attacking the Tar Heels and played a key role in how quickly Kansas came back early in the second half. Wilson showed throughout the season that, even though he was capable of scoring from the outside from time to time, his best games came when he forced the issue and attacked straight downhill. Few players could stop his combination of size, strength, skill and footwork and his ability in the paint and around the rim was a real weapon for the Jayhawks this season.

6 – Ochai Agbaji – In the category of things that don’t make any sense but actually really still do, Agbaji finishes the season with his lowest single-game ranking on a night when he was named the Most Outstanding Player at the Final Four. None of what he did or did not do on Monday had any bearing on Agbaji’s magical season, which has been well documented throughout this Kansas run. Whether the stats were there or not, this guy was the soul of this team, and his unflappable demeanor and general presence allowed everyone to be themselves and grow at their own pace. That allowed this group to become a team and that team won a national title despite their All-American shooting just 4-of-9 from the floor and 3-of-8 at the free throw line, with three rebounds, two turnovers and one assist.

7 – KJ Adams – Despite playing just 2:44 for the game, Adams’ minutes were actually pretty massive. He checked in for the final couple minutes of the first half and helped Kansas get to the locker room down just 15 without risking further foul trouble by McCormack. And then, with 4.3 seconds remaining and the game on the line, he was asked to check in to defend North Carolina’s last-ditch effort to try to tie the game. He didn’t have to do much on the play, but, look; any freshman who has played precious little throughout the postseason but stays ready to go in during moments like that certainly has my respect. He also has a bright future.

8 – Mitch Lightfoot – I can’t imagine Lightfoot pictured a 2 points, 1 rebound, 4 fouls game being the way he would close out his long college career. I also can’t image that Lightfoot cared one bit. His team was the last team standing this postseason and the good doctor, after six seasons with the program, was finally a national champion.

9 – Jalen Coleman-Lands – He played just 2:11 and did not attempt a shot in his final college game. But he did get a national champions hat and memories that will last a lifetime. Coleman-Lands turned out to be way more than just Ochai insurance on this roster. He became a part of the family, he provided a veteran, mature presence that every team needs and he finished the season as a legitimate part of the rotation on a national title winner.

Bill Self on David McCormack, Remy Martin & how these champs compare to the 2008 crew by KUsports.com

Bill Self, Kansas players speak after winning the NCAA title by KUsports.com

DMac was greeat in his last game I agree!!!

Like many fans, I gave McCormack a lot of grief throughout the year, but when it mattered most, the big man came through, big time.

I would suggest that Ochai is above Jalen because he got the focus of by far their best defender (vs their worst) and got him out of the game. Och also had one of those big blocks that amazed the announcers.

I’d also put DaJuan ahead of CB simply based on the player’s vote. That being said, this game in particular is a perfect example calling for a revision to the ratings. It can remain numeric but if it becomes qualitative vs ordinal, it will provide a better image of the performance over the course of the season and also allow for greater comparison between games. In the current version, each game is the same and you can’t tell how much better the team played Monday than say against TCU, bu, or uk.

It’s also a bit interesting to me to realize that CBs fire was such a stark contrast to his admitted doubt to start half time.

Not against considering a change, Dirk. I just haven't been able to think of one I like. I've seen people suggest putting players in tiers and I'm not a fan of that. The one someone suggested a while back (maybe you?) seemed far too intense and time consuming to pull off 35-40 times a year.

I've got an offseason to think on this. And I will. But I still think there's value to ranking them after each game individually, mostly because of the thought that goes into each blurb about that player's game.

As you've noticed and many have pointed out, it includes more than just the statistical data and can be a way for me to analyze these guys in a manner that the game story and notebook do not allow for.

Appreciate everyone following along and chiming in and I really have enjoyed doing these this season more than ever before. Means a lot that they were well received!