Multiple factors led to major improvement in secondary in one week 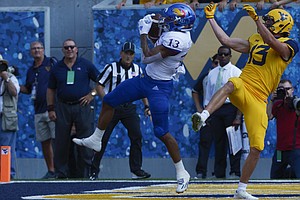 The switch from primarily using a three-man front to a four-man front for Saturday's game in Morgantown resulted in a far better pass rush. The appreciative secondary responded with three interceptions in the red zone of West Virginia quarterback Will Grier, who had not thrown a red-zone pick in his career heading into the game.

Daniel Wise stood out up front and Hasan Defense in the back, but according to defensive tackle J.J. Holmes, Wise didn't carry out his assignments any better than any other week. Holmes said it's just that what he was asked to do led to more visible contributions. Wise has faced constant double-teams this season with KU in a three-man front, but it's harder for offensive lines to do that against four-man fronts. Wise brought phenomenal energy fighting off his blocker to disrupt plays in the backfield.

The D-line produced its best statistics of the season, but did it have its best performance?

"No," Holmes said. "I think this is one of our better ones, but some games it's just not built in our game plan to sack a lot like it was today. We build in for different things. Sometimes it's not to rush the passer. Sometimes it's just to keep him in the pocket and make him throw passes that we don't think he can make. I feel like I've seen us play better."

Said Beaty of Wise: "I think he played very relentlessly throughout the day. He had a look in his eye coming into this game. We challenged him and that defensive line to be able to put pressure on (WVU QB Will Grier) and I think they answered the bell pretty well. One of the things we benefited from was they had a bunch of poor snaps early."

Defense had two of KU's three picks and returned them 28 and 60 yards. He went from one of KU's worst players on the field against Oklahoma State to one of its best vs. the Mountaineers. Defense started the season as a cornerback and has been playing safety the past few weeks.

Defense explained a specific way he improved in one week.

"We were in man on both plays," he said of his two interceptions. "As soon as the receiver broke off on the route, I tried to get a little peek back at the quarterback, not too long because last week they hit me with a double move. I practiced on the quick little glance all week so I wasn’t staring and getting beat.”

"The switch from primarily using a three-man front to a four-man front for Saturday's game in Morgantown resulted in a far better pass rush. "

No kidding. I'm not a football coach or analyst, but how would 3 rushers EVER put any pressure on a QB with 5 blockers (6 with a fullback or TE) -- that means they could double-team every DL man of ours.

Having more guys dropping back in coverage does no good if the QB has all day to throw.

Add to that is qb is mobile once he has bypassed the rush he can run if no receiver breaks free.

I've been saying this for weeks

There are loads of teams that play a 3 man DL. A significant advantage it can create is allowing for greater flexibility in which players to rush. It was my understanding that this was part of the development of Johnson (?) in the hybrid role. The grad transfer (?Lipscomb?) seemed to have a nice game as the 4th DL.