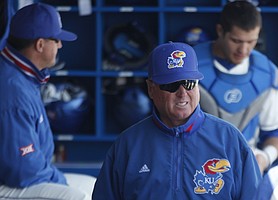 Kansas baseball coach Ritch Price watches the Jayhawks from the dugout during a home game against No. 5 Texas Tech, Saturday, April 8, 2018, at Hoglund Ballpark. by Mike Yoder

Kansas State baseball coach Brad Hill’s contract is up at season’s end. He knew it wasn’t going to be renewed, so he decided to announce his resignation Tuesday with a couple of weeks remaining in the season.

The timing could not have been worse for K-State’s chief rival, Kansas, because the Jayhawks visit Manhattan for a three-game series, today through Saturday.

“I told our guys there is going to be some emotion in their dugout and they’re going to play their rear ends off,” Kansas coach Ritch Price said.

Hill, an assistant at KU in the school’s lone College World Series appearance in 1993, has been Kansas State’s head coach since 2004, one year after Price took over the Kansas program.

“We have a really good relationship,” Price said. “We have two of the hardest jobs in America. I have incredible respect for how hard he’s worked and the success he’s had. I know the obstacles he’s had to overcome, competing with warm-weather schools with unbelievable facilities and great recruiting bases and he’s done an outstanding job.”

The Wildcats have fallen on hard times since winning the Big 12 regular-season title in 2013.

They are in danger of finishing last in the Big 12 for the third time in five seasons since then. K-State’s four NCAA tournament appearances came in a five-year span from 2009 through 2013.

Staying out of last place in the nine-team Big 12 is a big deal because only eight teams qualify for the conference tournament.

I think Kansas coach Ritch Price as both a great teacher and someone who has always gotten the most from his players that I am surprised that I haven't heard any discussion about his future after 15 years at Kansas.

I hope it stays that way. I