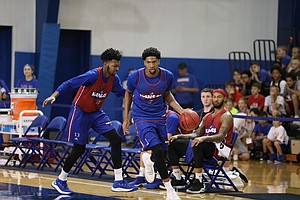 KU forward Dedric Lawson (1) makes a move to get by his brother, K.J. Lawson during the Jayhawks camp scrimmage on Tuesday, June 5, 2018, at Horejsi Center. by Nick Krug

Myron Medcalf does a nice job of detailing why he considers Keelon Lawson to be “the most influential man in college basketball,” in a story he wrote for ESPN.com.

The gist of the story that appears under the headline, “Meet the new first family of college basketball”: Keelon Lawson not only has two highly ranked sons playing high school basketball in Memphis, but one of them might form a package deal with the No. 1 recruit in the Class of 2019.

Dedric Lawson and K.J. Lawson will make their debuts at Kansas this coming season after starring for two seasons at Memphis, where their father, Keelon Lawson, was demoted by Tubby Smith from the assistant coaching position for which Smith’s predecessor, Josh Pastner, hired him.

The moment the older Lawson brothers transferred to Kansas, the Jayhawks became the favorites to land both younger brothers.

Chandler Lawson’s high school teammate, James Wiseman, is a 7-footer ranked No. 1 in the Class of 2019 by ESPN, and Medcalf writes that there is speculation that Wiseman and Chandler Lawson might form a package deal and attend the same college.

It seems as if those package deals seldom come to fruition though.

If Dedric and K.J. Lawson enjoy this season, KU would seem to be in great shape for landing at least Chandler Lawson, maybe even Wiseman.

But it’s not a slam dunk. Their coach at Memphis East High, Memphis basketball legend Anfernee “Penny” Hardaway of NBA fame, was hired by Memphis to replace Smith, who is in his first year at his alma mater, High Point University in High Point, N.C.

Smith was fired after two seasons on the job at Memphis, the beginning of the end of his tenure coming when he demoted Keelon Lawson. Hardaway, Medcalf writes, goes back 20 years with the Lawson family, so Memphis has a shot at restoring relations with the family.

If all goes well for the older Lawson brothers this season, though, KU could be difficult to beat for Chandler Lawson and Wiseman.

Dedric Lawson very well may be KU’s best player. How well the 6-7 K.J. Lawson makes the transition to the perimeter could factor in his playing time and in turn become an influence on where Chandler Lawson, and maybe even Wiseman, attend college in 2019-20. K.J. averaged 12.3 points and 8.1 rebounds and shot .328 from 3-point range as a sophomore for Memphis. He has made it clear he considers himself a guard. If his skills don't match his self-scout, it has the potential to develop into a sticky situation, something of a puzzle for Self to solve.

do NOT relax the team or will be another disappointment for KU basketball!

Wiseman will end up in Memphis unless Calipari can pull him away.

It would be hilarious if Cals old school was able to snatch away a guy that he wants..it would be karma..John Wall and Demarcus Cousins were destined for Memphis until he convinced them to follow him to UK

Coaches it’s our time to punch the right buttons,

Someone could get Wiseman and Chandler Lawson, if that is a real package deal. OR you could get Robinson-Earl and Matthew Hurt. You're not likely to get more than two of the four. There's not a lot of smoke that Wiseman is seriously considering Kansas at this point. I think the most likely scenario is Robinson-Earl and Hurt coming in as the bigs in the 2019 class.

I could live with losing the Lawsons to Memphis if it means KU can land Hurt and Earl instead..either way KU would get a good set of players

When the Lawson committed to Kansas, it was assumed that the younger lawsons were destined for KU..but Hardaway is gonna be hard to beat..not because of his coaching prowess but because he has known the family for 20 years AND he is a Memphis legend...id give Memphis the edge right now on both kids by that virtue alone..BUT, if KJ and Dedric do fantastic at KU and both find themselves on NBA rosters, it will elevate KU's chances..not to mention they'd be the 3rd pair of Memphis transfers to make the NBA after coming to KU (Tarrik Black), which wold look very appealing .or if Hardaway doesnt show that he can coach and Memphis sucks, then that should help KU out as well

Really good post-Craig. Hardaway definitely threw a wench into our recruiting efforts but if Dedric helps us return to the Final Four and becomes a lottery pick, then I think we still have a legitimate shot.

I'm not sure where the Lawson's stand academically but ever since the Penny hire I've honestly been petrified of the reverse happening. The older 2, K.J. and Dedric, spending one year at Kansas then returning back to Memphis for a reunion with the younger brother via grad transfer. Also, I would think if he stayed in the college ranks Memphis would have to be on Legrald Vick's shortlist as well.

the older Lawsons going back to Memphis wont happen..Dedric is this years Malik Newman..he doesnt plan on staying for more than a season, he'll be NBA bound after this year..and KJ (as well as Dedric) have already sat out an entire year..there is no logical reason why they would purposely derail their NBA plans to go back to Memphis to help Penny or play with their brother and have to sit another year..hell, it isnt promised that the younger Lawsons will go to Memphis..

"Grad transfer". KJ will have completed 4 years by the end of this year. If he can finish his degree, he could go back to Memphis without sitting a year.

If he graduates then that's his decision but I don't think the optics would reflect positively towards KJ. Besides that, he would have wasted two years at Kansas.

I want to believe that but you can never underestimate the lure of having a family friend ask you to do them a favor..its not like the NBA wont notice them if they did go to Memphis..if you are good, the NBA will find you..with that being said, if KJ and Dedric love their time at KU, they could play devils advocate to Hardaways recruiting pitch..Hardaway might have known the family for 20 years, but KJ and Dedric ARE their family..id like to believe that older brothers have more influence than a family friend..but we will all have to just sit back and hope for the best