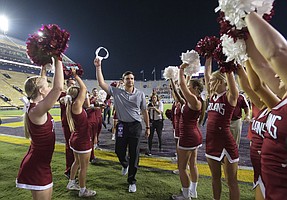 This series is a list based largely on how one section of potential coaching hires — head coaches at “Group of Five” schools — shape up on paper. So it’s a nice first step for deciding which candidates to interview. Once candidates advance to the phase of face-to-face interviews, everybody starts from scratch.

Drue Jennings, lead organizer of Kansas’ search for an athletic director that led to the hiring of Jeff Long, did a nice job of articulating Wednesday that how a candidate comes across in person trumps any data gathered through other means.

“In today's world of information access, you can find out amazing things about people,” Jennings said. “It doesn't matter who they are. And frankly, anyone who wants to do that type of exploring can do that. The thing that I've always found that I feel most comfortable with after you've looked at all the measurable and the visible data about a person in their life, is to meet them.”

“There's nothing quite like looking into the eye and visiting and reading the body language of a person, and that's been true my entire life,” Jennings said. “I tend to trust my gut, trust my instincts, after all the rest of the homework is done, and you can read people, I think, pretty well. … You can read a person who is pleasant to meet, very sociable, a gentleman, a professional, but who is tougher than nails. Just in the way he communicates and the resolve with which he describes those things that make him tick. You can tell that, like the chancellor, this guy (Long) means business.”

It’s no different from hiring a coach. You don’t hire a piece of paper. You hire a person, so a list that might start with coaching prospects ranked from 1 to 10 on paper, stuffed into a pocket until which time an athletic director creates a coaching opening, could and in most cases should completely be jumbled after getting a feel for the people involved.

Kansas isn't in the market for a football coach yet, but it always pays to be prepared.

Why he made the list: In his second season at the school, Brown led Troy to the nation’s biggest turnaround, improving from 4-8 to 10-3 and then finished the opening month of an 11-2 2017 season with a stunning victory in Baton Rouge against LSU.

A native of Danville, Kentucky, Brown played wide receiver at Kentucky for Air Raid guru Hal Mumme and at UMass. he worked as an offensive assistant coach at Mass, Sacred Heart, Delaware, Troy, Texas tech and Kentucky before being hired to head the program at Troy.

He was offensive coordinator under Tommy Tuberville at Texas Tech in 2011 when the Red Raiders upset No. 3 Oklahoma, 41-38, and was OC for Mark Stoops at Kentucky before taking his first head coaching job.

Brown’s teams have impressed on both sides of the ball, but his offense is one that might not make sense for Kansas, which at least for the foreseeable future, will be the underdog most weeks. It’s known as the spread NASCAR because players sprint to the line of scrimmage, pursuing the goal of snapping the ball within eight seconds of completion of the previous play.

The more plays in a game, the more it favors the team with more talent. Kansas tried the hurry-up offense in the early weeks of Doug Meecham’s tenure as offensive coordinator and it not only didn’t work, but also accelerated the exhaustion of a depth-challenged defense that spent far too much time on the field.

A candidate for the Arizona job that went to Kevin Sumlin last season, Brown reportedly has a buyout of nearly $3 million.

Troy has a terrific football coach who would be a good fit at a lot of schools, but maybe not at Kansas.

He will have MUCH better offers than KU in due time....

Bob Stoops is our next coach.

Step away from the bong dude....

"Troy has a terrific football coach who would be a good fit at a lot of schools, but maybe not at Kansas." That's silly. Does this statement mean KU can't recruit at the same level as Troy State? The defense was bad last season regardless of how fast the offense played or how exhausted it was (or not) . See the opening series against Ohio.