As many as 4 newcomers could start at O-line 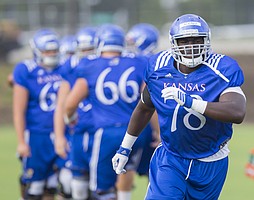 First-year offensive line coach A.J. Ricker faces as daunting a challenge as anyone in the Kanas football program. He has so much reworking of the offensive line to do and so little time to do it before the Jayhawks open the season for a 6 p.m. kickoff Sept. 1 vs. Nicholls State.

Ricker is in the process of identifying which blockers are best suited for which positions. At the same time, Ricker is trying to determine which of the 22 O-linemen will be counted on to play this season and which likely are headed for scout-team duty and possible redshirt seasons.

“It’s a big puzzle right now,” Ricker said. “It’s musical chairs. Guys are moving around. After about two weeks, I’d like to really start slimming that thing down and understanding these are probably the 10, 12 guys we’re going to need for the season. That’s where we keep them at their position so they can start jelling.”

It doesn’t give the line much time to coalesce, but with so many veteran blockers brought in from outside the program, at least the numbers are better than in recent seasons.

“That’s the biggest thing, competition,” Ricker said. “Guys know they have to show up for every practice ready to roll: ‘I have to show up every day, focused, ready to work.’ Guys are going to have bad practices. Guys are going to have bad days. But, at least, now they know there is a little bit more of a repercussion than, ‘Hey, let’s do better, Johnny. You had a bad practice.’ You could use a little of it as motivation. Having depth is really going to help us.”

So, even with so little time to form a new offensive line, Ricker sounds confident Kansas can field a better offensive line immediately than the one that struggled to open holes for running backs and keep quarterbacks on their feet a year ago.

“I think it’s very realistic,” Ricker said of instant improvement. “Obviously, I took this job knowing a lot of that and wanting to fix it, and, obviously, I feel like I can fix it. Last year was last year and we’re moving forward, and telling those guys first sign of adversity, it’s not, ‘Here we go again.’ We’re starting all over. The good thing about camp, we say it all the time as coaches, and I think they believe it now, is every job is open.”

A gold star to anybody who can predict what the season-opening depth chart will look like at the five O-line positions.

I’ll take a stab at it and I would be curious to see other close followers of KU football do the same in the comments section below.

Adeniji has started all 24 games of his Kansas career, most of them at left tackle. Mane played left guard for College of San Mateo. Fontana, sidelined by injury last season, played center in junior college and made one start at center in 2016 for Houston, four starts at guard. Ricker praised the work Fontana has done at center and in the meeting room.

Wallace made nine starts for Cal in his lone season there after playing two seasons in junior college. He was listed as the starting right guard in the depth chart released after spring football. Feder, a transfer from Ohio State, has two remaining seasons of eligibility after coming to Kansas as a graduate transfer. An injured foot kept him off the field early in his career. He was cleared to play last season, but did not make it onto the depth chart.

The influx of older players with more mature bodies should help, even if chemistry will take time to develop.

Juco transfer Reuben Lewis will battle for a spot on the depth chart, as will junior Antione Frazier, who has not used a redshirt year yet and could benefit from one. Redshirt freshman Joey Gilbertson will fight for snaps at center and redshirt sophomore Cam Durley will try to make it onto the depth chart at tackle. Tovi won’t cede the left guard spot easily, so that position will make for an interesting battle.

Also, Ricker is very high on true freshman Jacobi Lott's potential, but ideally, Lott will redshirt because he'll be more ready to make a big impact in his fifth year than in his first.

Very interesting. Thanks for the article. Mane and Lopetti are the surprises to me.

If they can develop the chemistry, your starting line call looks solid and could be best since mangino.

I'l agree on one thing. Tovi will be hard to beat out. He's too tough and mean. If Mane can replace him then the rest of the Big 12 better look out.

Agreed. Both are stout 330lb beasts. I give Tovi the edge due to experience with the playbook.

Hopefully, this is a good thing. But, for several years (now), it's been a major complaint that there's no continuity on the OL. And yet, here's another season starting out with a lot of new comer's on the OL. So, this doesn't look very promising either.

At this point I would rather have competency than continuity. The last few years, the line has been far from competent. Something you can really see with guys like Ryan Willis and Montell Cozart playing elsewhere with success well beyond what they had at KU.