David Beaty has no trouble identifying team's most improved position 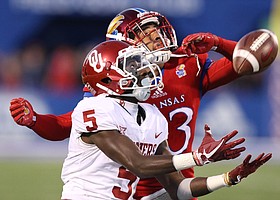 Oklahoma wide receiver Marquise Brown (5) has a deep pass knocked away by Kansas cornerback Hasan Defense (13) during the third quarter on Saturday, Nov. 18, 2017 at Memorial Stadium. by Nick Krug

David Beaty has toned down his wild-eyed optimism this spring, a conscious move that has resulted in the compliments he does pay to certain aspects of his fourth team carry more credibility.

Beaty singled out the cornerback position as the most improved on the team, which is a good thing, because it had such a long way to go.

"I am most excited about the corners," Beaty said. "I just keep coming back every week to the corner group. And we've got more of them, and we still have two more coming, which is great."

The most intriguing of the two cornerbacks who will join the program in June are Elijah Jones, who had committed to Central Florida but backed out after head coach Scott Frost left for Nebraska. He's a three-star recruit who stands 6-foot-1 and weighs 175 pounds. Jones is a native of Fort Meyers, Fla. who played juco ball in Iowa. Elmore Hempstead, 6-0, 185, turned down scholarship offers from Arizona State, Central Florida and Iowa State to sign with Kansas.

"Each week I see one of those guys getting better," Beaty said. "Shak Taylor sticks out to me this week. Corione Harris is getting better by the day at what we're doing. He's very athletic, but he's becoming more of an efficient player because he's learning what to do."

It's not uncommon for cornerbacks to make big strides in their second year in the Big 12 after the shocking baptism that long, fast receivers put them through as rookies.

"Definitely," Defense said of expecting a big improvement in his second year in the pass-happy conference. "Big things are in store, I can promise you that."

"There's just a whole slew of them," Beaty said of corners who have improved. "Kyle Mayberry is doing some things over there that I wasn't quite sure that I would see him do. But he's done a nice job. I think Coach Bowen has done a really good job with those guys."

Kansas finished 126th in the nation with 296.8 passing yards allowed per game and surrendered 31 touchdown passes with just four interceptions in 2017. Dreadful numbers.

He just unfortunately has trouble coaching a competent football team.

If we go to more of a running game this year, that will help the corners, and the entire defense. Last year, the offense couldn't stay on the field long enough to give the defense a break. Given that handicap, the defense play it's heart out all year.

126th in the nation with the Pre-season DPOY in D Armstrong and All Big-12 DT Daniel Wise and 25 TFL 2nd-team SI All-American in Dineen. Think abount that. I hope Miller can usurp control of this defense. 45 points/game and bottom-3 in defensive scoring and just 4 INTs doesn't happen by accident. That's screams incompetence and poor defensive coaching.

DE Kamura has to provide a semblence of a pass rush or else this group of DBs will be left to cover for 7+ seconds with each pass.

You talked sh** on the hiring of Bill Miller tho...

I'm happy to see Bowen back working with the DBs, he has a lot of success there. Miller at LB, and Ricker at OL should show big improvement. Miller and Bowen should work well together to get them most out of the Defense. Mecham now working with the QBs will give him no excuses. I say things are looking up.

Bowen has always been a pretty good position coach, he just can't scheme for crap.

The phantom poser " can't talk any other way about anything. He's a whiner and complainer - period.

Remember when the LJW told us all we had to use our actual names, and not our user names in order to promote comment integrity? In that light, it only makes sense that we'd get this ignorant drivel, though there are a few named posters that do give him a run for his money as most negative.

I’m gonna go out on a limb and say we crack the top 120 in the rankings in pass coverage...

Does any of this matter if either QB throws around 52%?

It's a new season with an upper class dominated team. Let's let them play some games before we start badmouthing players and firing all the coaches.

How many games do you expect the 4th year coach and upper class dominated team to win?

Will next year's most improved position be Head Coach???