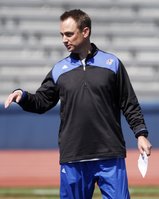 During our KU Sports Hour football podcast Monday, Matt Tait asked me to throw out a guess off the top of my head as to the number of assistant football coaches Kansas has had in the eight seasons since Mark Mangino was forced to resign.

I guessed 35. Pretty close. The correct answer is 38, including three men who were assistants under Mangino. David Beaty was Turner Gill's wide receivers coach in 2011. Clint Bowen was hired as special teams coach by Charlie Weis in 2012 and took over as defensive coordinator in Weis' following seasons and has remained in the position under Beaty. In 2014, John Reagan was Charlie Weis' offensive line coach and his offensive coordinator, the latter a responsibility Reagan lost a couple of weeks into Bowen's time as interim head coach after Weis was fired four games into the season.

Kansas went 50-48 in eight seasons under Mangino and with three games left in the eighth post-Mangino season has a 15-78 record.

If Kansas makes a change at head coach, it will be interesting to see if the next head coach is someone who has had the majority of his staff together for a number of years, which would save the step of a coaching staff meshing and assistants growing familiar with the head coach's way of conducting business.

Bring in Jeff Monken and you will have instant stability and the foundation of a good football program.

I'm great with that hire. He's a proven HC and would bring an offense the Big 12 isn't used to.

Thank you for suggesting someone realistic. I'm tired of hearing Mangino's name brought up. He's not Bill Snyder, he's not coming back and I wouldn't expect him to. Monken, Doeren, Frost, those are names I want to be hearing. Not saying we have the pick of the bunch because we don't, but if people are seriously hoping Mangino will come save us I think they're wasting their time.

I'm not sure his offense would fit in the big 12 or KU's personnel. 266 passing yards to date.

The offense is designed to take advantage of lower-level personnel. It would be a great fit since we have a good core of RB's, a maturing offensive line and a few capable receivers. It's the easiest conversion in offensive schemes out there. Plus, it gives us a long-term solution to recruiting.

Starting with 2012, all of this coaching carousel crap goes on Zenger. I'd be curious to know his rap sheet in all the other areas. Such as, how are his other hires in Athletics doing? And what else has he done that would make him appear as a strong AD? There has to be something that keeps him where he's at.

He also hired our women's basketball coach (who has had an atrocious record).

The women's basketball hire was kind of a crazy hire. To me, it seems kind of like the Terry Allen hire.

A guy who won a National Chmapionship with Kansas kids at Emporia State and was rebuilding a lackluster SFA program is a crazy hire? Hmmm

One thing missing from Keegan's article are the comparative coaching turnover numbers during Mangino's eight seasons. That would be interesting to see as well as the numbers under Snyder at K State.

Zenger has done a lot of facility development--Rock Chalk Park, refurbished Allen FH, baseball field, and the ongoing football stadium. Most of the sports have done well. Basketball, track and volley ball especially. Football is the only thing that has really had a bad showing. I don't know if the decision makers will think that's enough to condemn him.

Are you missing Klint Kubiak?

I wish you didn't write this article the way you did Tom. I love never agreeing with you but I wish you would have at least shown the statistics of other Big 12 teams as well as the Mangino Era. Now you've gotten the headline only readers all running amuck when these numbers are not bad.

Where are your numbers to prove that they aren't bad? As outlined below, they are more than double the turnover ratio of the Mangino era.

All staffs have turnover, no doubt. But this is grossly excessive. Shows impatience by the HC and empowerment of the HC by the AD. And also dissatisfaction among some of the coaches who left. It's no way to build consistency in a program. He hand-picked Likens, dumped him, hired himself, dumped himself and hired Meachem. Given our offensive performance this year - last in the conference - I'm guessing he'll hire Charlie Weis to run the offense next year.

The ship is sinking Bryson. Denial, hope and trust won't keep it afloat.

Why don’t you offer ur resume. You seem to know what offense best fits our personnel. You talk about it everyday.

That's an average turnover of 2 assistants per year.

Less than half the average post-Mangino. Not good.

I remember vividly listening to Soren Petro after the end of Beaty's opening 0-12 season, commenting on the staff turnover. Petro stated that he had heard that coaches who had come to work for Beaty were abandoning ship after one year on board. Not a good look.

Another article written by Tom Keegan just to TRASH to KU football program. Tom is just hoping that Beaty will be fired so he can look like a big shot. (Small fish in a small pond)

Oh .. so you think that 0-12, 2-10, and 1-11 seasons don't merit criticism? The AD and his football coaching hires are the ones trashing KU in case you haven't noticed in national media. Perfectly acceptable article with nothing but facts presented. Perhaps you should demand a little more of our athletic director, and worry less about the facts the media puts out ...

In fairness to John this is a pretty random topic to talk about. It’s not like his assistants are quitting. Keegan just woke up today and felt like talking about previous departures from assistant coaches. Much more relevant things he could of brought up to trash the program.

Actually, I like David Beaty. Good guy in my opinion (subjective). My use of facts (objective) does not paint a pretty picture of the state of the football program under his leadership.

From this table it looks as though Meacham's twin brother was brought on as WR coach so Doug could focus on the OC duties.