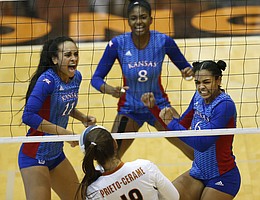 Kansas' Zoe Hill (6) celebrates scoring over Texas' Paulina Prieto Cerame (19) with Kelsie Payne (8) and Ainise Havili (11) during a match at Gregory Gym in Austin, Saturday, Sept. 24, 2016. by Stephen Spillman/Special to the Journal-World

Having two All-American seniors, right-side hitter Kelsie Payne and setter Ainise Havili, who led their teams into the Final Four as sophomores and then won a school-first Big 12 title as juniors can make a school an attractive destination for transfers and that’s how the offseason played out for the Kansas volleyball program.

Libero Cassie Wait and middle blocker Tayler Soucie are gone but the Jayhawks have an experienced, talented roster joining the two All-Americans as they try to return to the Final Four, which is in Sprint Center this year.

Middle blocker Mmachi Mwoke, a 6-1 sophomore, comes to Kansas from the Dallas area after a spending a year at Arizona State.

Half of the 16 players on KU’s roster are seniors, so experience won’t be an issue.

In other volleyball news, KU Athletics nominated Wait for the 2017 NCAA Woman of the Year Award. Wait’s final season as a KU player came when she was a first-year law student. She was named Big 12 Libero of the Year and AVCA All-American Honorable Mention after helping Kansas to earn its first conference title.

The Jayhawks have an exhibition match vs. UMKC on Saturday, Aug. 19 at 1 p.m. in Horejsi and open their season at North Carolina State at 4:30 p.m. Friday, Aug. 25.

Can't wait have grown in love with this team of ladies. - -Heard rumor about adding on for additional seating, is that true? - -any updates? - -Thanks greatly appreciated

How can a sophomore who spent a year at Arizona State be considered a graduate transfer?

Just fixed it. Thanks.

Can't wait for the start of the season. This team has been fantastic for years, and seeing them play at home is a treat.