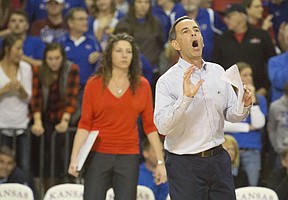 Kansas coach Ray Bechard shouts in instructions from the sideline as associate head coach Laura "Bird" Kuhn looks on during Kansas' second round NCAA volleyball tournament match against Missouri in 2015 at the Horejsi Center. The Jayhawks sent the Tigers packing with a three set sweep.

Texas A&M has identified Kansas volleyball associate head coach Laura “Bird” Kuhn as its choice to become head volleyball coach and is expected to announce the hiring after the first of the year, barring any last-minute snag in contract negotiations.

The AVCA named Kuhn national assistant coach of the year in 2015, when sophomore All-Americans Ainise Havili and Kelsie Payne led KU to its first Final Four. The Jayhawks followed that up by winning their first conference title, edging Texas to win the Big 12 in 2016. Missouri bounced Kansas from the NCAA tournament in five sets in the first round this season.

Kuhn played a big role in helping KU to its best stretch of volleyball in school history.

Kuhn served as KU’s recruiting coordinator and was instrumental in landing Havili, Payne and Madison Rigdon, all of whom started as sophomores for KU’s Final Four squad. Kuhn also worked with KU’s middle blockers, including All-American Caroline Jarmoc.

Kuhn joined Bechard’s staff in 2011 and was elevated to associate head coach in advance of the 2015 season.

Kuhn has not made final decisions on her staff but could have an interest in talking to Bechard’s other top assistant coach, Todd Chamberlain, about joining her at Texas A&M. Chamberlain came to KU to work for Bechard one year before Bechard recruited Kuhn onto his staff.

KU’s recent success, coupled with the fact the school is expanding its home court, the Horejsi Center, from a capacity of 1,300 to 3,000 in 2019, make the two openings on KU’s staff attractive ones.

Kuhn, considered for the past few years to be Bechard's successor in waiting, has shut down feelers for other jobs in recent years, but none quite as appealing as the Texas A&M position.

COULD be a huge loss for KU volleyball. The program was mediocre at best, and downright awful at worst, in the years prior to Chamberlain joining the staff. Perennial bottom feeders in the Big 12. Chamberlain was hired, and Kuhn came along shortly thereafter, and recruiting surged and performance excelled with it.

Not exactly saying Bechard can't do it on his own, but things finally clicked for him when he was able to assemble the right staff. Hopefully he can do it again.

Good assistant coaches want to become Head Coaches. You can't blame someone from wanting to run their own show and make the big bucks. Hopefully, Bechard can hire two good replacements.

Probably should blame Coach Beaty for this Tom and add to your negative narrative.

What a great opportunity! Can't keep good assistants forever! I hope he can get a solid recruiter to replace her!